Catching up with friends at the banquet

I always enjoy going to the drawing banquet in Anchorage, because there’s a wonderful mix of fans, volunteers, handlers, and mushers. I got to see many of the friends that I only see once or twice a year, and it was great to catch up!

One of the wonderful people i spoke to, Lev Shvarts, is running Iditarod again this year. He and I wound up camping together several times during last year’s race, and I enjoyed the tidbits of info he gave me during the race that helped me along the way. This year he is running largely the same team of dogs as last year, he said that last year he was building their mental toughness, and this year he plans to challenge them a bit more and try to place a bit higher. This is his team’s second Iditarod, and he says they’re on a four year cycle, so be sure to watch them in the future as well! 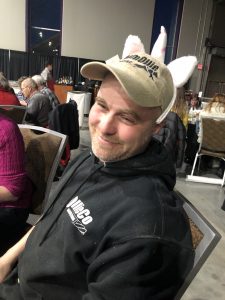 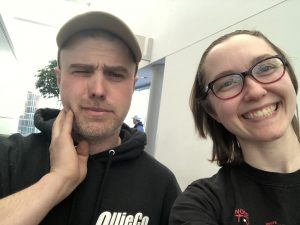 You may notice that he’s wearing unicorn horns in one of these photos – the joke is that he had a unicorn embroidered onto his sled bag this year, so he was blessed by the unicorn with glitter at the banquet too! Good luck on the trail Lev!