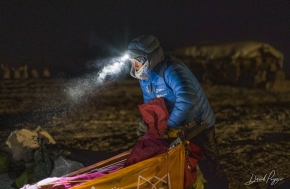 Ryan Air is a returning Lead Dog sponsor of the 2021 Iditarod. The award consists of $1,000 in gold nuggets and an ivory carved figurine of a dog sled and team.

The company was founded in Unalakleet and its core business is serving the people who live along the Bering Sea coast and throughout western Alaska. Mushing has long been a way of life for the Ryan family. The company’s founder drove mail by dog team between Unalakleet and Kaltag in the early 1900s and other Ryan family members also mushed dogs in the territorial guard with Muktuk Marston.

The Ryan Air Gold Coast Award will be re-presented to Seavey at a later date.