Rookies are Excited to be on the Trail

In talking with some of the rookies today, the general consensus was that they were all ready to be on the trail – most were very nervous, but knew that once they left the starting line they would be in their happy place!

Victoria Hardwick was one of the first rookies I talked to, she was being smart and trying to hydrate herself before the race – one of the most important parts of mushing is keeping yourself hydrated so you can take proper care of your dogs. Victoria mentioned that she planned to take her 24 hour rest in McGrath, and I gave her some advice because that’s where I took my 24 hour rest last year – she was mostly excited about the prospect of showers when I told her there were shower facilities in the checkpoint! After 3 days of mushing, a shower feels like heaven out there. Victoria also said that it really hadn’t hit her yet – I told her that it really didn’t hit me until I left the starting line, and I immediately burst into tears which are visible in some of my start photos from last year. I’m pretty sure that’s when it hits all rookie mushers, because the stress is finally gone, and you get to do what you’re good at, which is run dogs!

Richie Beattie was excited to be on the trail, I caught him packing his sled before the start and he seemed to be “in the zone” so I didn’t bother him too much.

Ryan Santiago said he’d be taking the race one run at a time – his plan for tonight was to mush a mile or two past Yentna Station (the first checkpoint) then bed his team down for a rest. Sometimes it’s nice to stay outside checkpoints, because it’s quieter for the dogs (and the musher), and your team will get more rest that way. It can also psych your competitors out, and make them think that they need to start moving again before they actually need to – the mental game is a big part of racing in the Iditarod for those actually racing to win.

As the mushers move on down the trail they’ll start getting into their groove – by the time they reach their 24 hour layover they’ll be professionals, and so will their dogs. The nerves will be gone, and they will just be excited to be seeing Alaska in a whole new way! 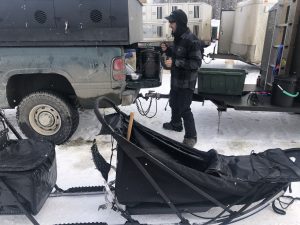 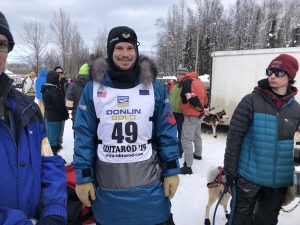 Ryan Santiago excited to get going 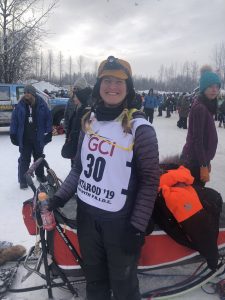 Victoria Hardwick in a good mood