Eye on the Jr. – Honoring the Petersons 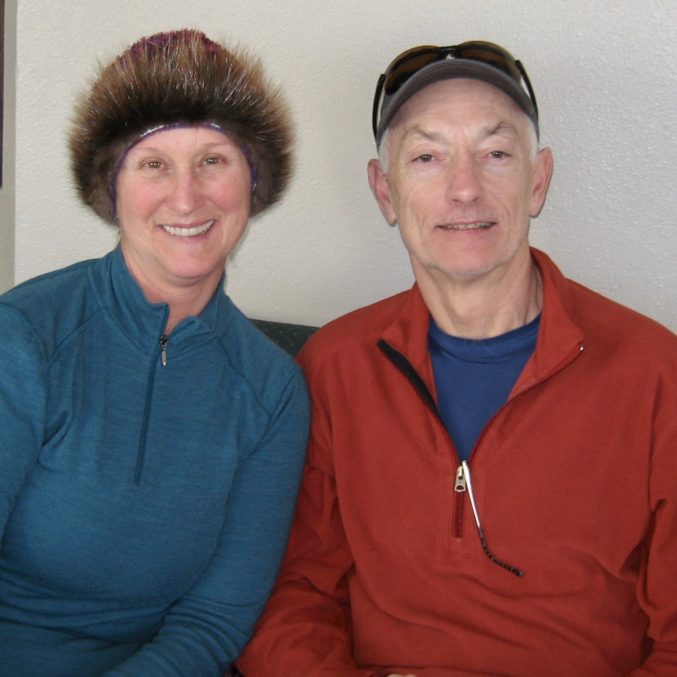 It’s a long-standing tradition for both the Jr. Iditarod and Iditarod to honor people who have given their time, energy and talents to the race.  The Jr. Iditarod salutes Linda and Dale Peterson as the honorary mushers for the 2020 race.  The Petersons will be wearing bibs with the #1 for the start of the 43rd Jr. Iditarod.

Any photos of the Petersons at the Jr. Iditarod start will have to be action shots. They won’t be standing around sporting their bibs and posing for pictures.  For the entire weekend, they’ll be hands on, doing what needs to be done, attending to the multiple tasks of setting up and organizing the start, finish and banquet.

Before the sun rises on Saturday, Dale will be on a tall ladder hanging the Jr. Iditarod banner to mark the starting point of the 150-mile race.  Dale’s aerial work will also include hanging flags to recognize the home state and country of each Jr. musher. 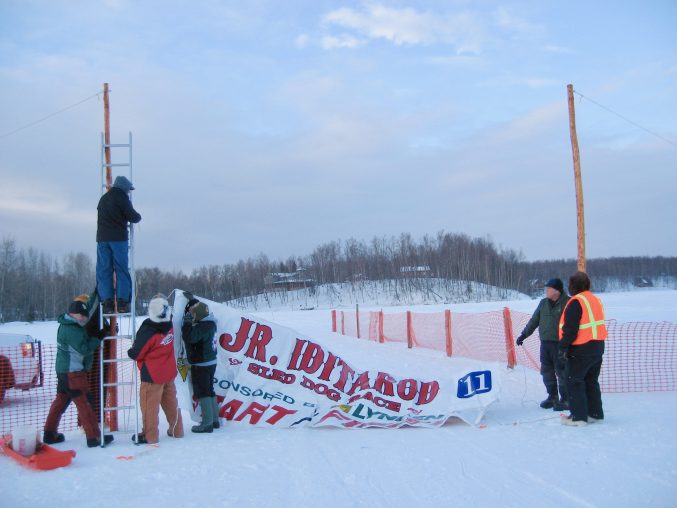 Linda has embraced the Jr. Iditarod and has been a dedicated volunteer for as many years as Dale.  Her contributions have generally been closer to the ground, except when flying out to help at a trail checkpoint.  As part of the trail crew she’s helped with communications, cooking, clean up – whatever it takes.

As soon as the mushers are heading down the trail, the Petersons will lead a team of volunteers in dismantling the start banner and transporting it north to Willow to be erected as the finish line.  In addition, there’s a lot of snow fence needed to define the starting chute and they’ll give a hand with assembling and dismantling that too.

Linda gives a helping hand in making the banquet the celebration of success the young mushers so deserve. Many hands lighten the work while accumulating prizes, picking up awards and preparing the community center and prize displays for the banquet.

Over the years Dale has served as the Master of Ceremonies for the Finisher’s Banquet and has been a dedicated member of the Jr. Iditarod Board of Directors.

Through friends, the Petersons learned of Iditarod and the Jr. Iditarod twenty years ago and became volunteers shortly thereafter.  The dogs and the mushers captured their hearts.  Dale says, “The Jr. Iditarod was a revelation to us – teenage mushers caring for their dogs, developing a rigorous training program and sticking to it.  These mushers are learning lessons in time management, organization and self-sufficiency that provide a foundation for success throughout their lives.  Who wouldn’t want to support that program?”

Ready, willing and able is a phrase that describes the Petersons perfectly.  For their tireless energy, attention to detail, good humor and other contributions that are too numerous to list, the Jr. Iditarod celebrates and thanks Dale and Linda.