Eye on the Trail – Beyond Skwentna 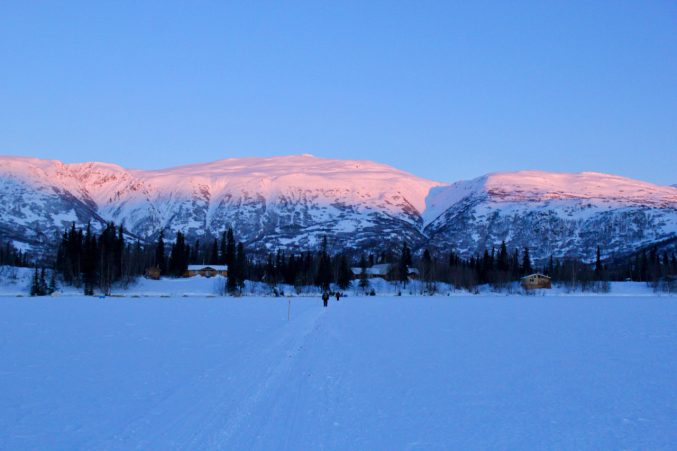 Morning Alpen Glow and a View of Finger Lake Checkpoint

You know you’re a serious Iditarod fan if the weather app on your phone contains locations along the Iditarod Trail – Willow, Skwentna, Nicolai, McGrath and Iditarod.  You’ve seriously got the bug if you check the weather where the mushers are before you check your own weather!  The temperature this morning under a clear sky prior to sunrise in Skwentna was 12 degrees with light winds from the SSW.

Veterans Cindy Gallea and Larry Daugherty along with Rookie Hal Hanson are still camped on the river below the Post Office as the first light of Monday creeps over the east horizon.  Thirty teams are on the trail between Skwentna and Finger Lake.  Twelve high-powered teams are resting on Finger Lake. 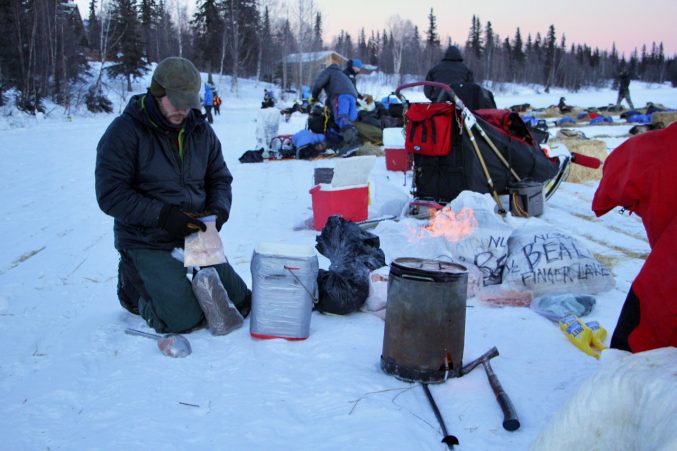 Where Skwentna was the center of activity on Sunday night, Finger Lake will take over the bulk of the action for Monday.  Insider reporters Greg Heister, Bruce Lee and Liz Raines broadcast from Finger last evening and were there to interview Nic Petit when he checked in.  Petit confirmed what we expected; the trail is HARD and FAST!  The temperature is great for humans and good for sled dogs.  The twelve teams sitting in Finger right now took advantage of the perfect night to make the 40-mile run.  With clear skies they may have even enjoyed northern lights.

There were wall tents available in Skwentna for mushers to sleep in but with the excitement of the day and adrenaline still pumping, they perhaps rested but probably didn’t sleep.  The checkpoint is typically pretty noisy with teams arriving and departing – the dogs are still excited and will let everyone know that with barking and howling.  Thus, many savvy mushers grab straw and supplies then camp a few miles down the trail.

Looking at current Race Standings, there were a large number of teams that spent only a few minutes of time in Skwentna but have a much longer run time to Finger than distance would suggest.  Take for example, Matt Hall.  He spent only 6 minutes in Skwentna then took 8 hours to cover the 40 miles to Finger.  GPS tracker shows he rested 4 hours between 21:00 Sunday to 00:30 Monday.

Following the race from home has comfort advantages and with the technology available through GPS Tracker and Race Standings fans know where the teams are, their speed and also their run rest patterns.  Add the excellent Insider coverage by Greg, Bruce and Liz and you’re right there with the mushers in the checkpoints – no warm boots, parka or insulated pants required.  Don’t miss the great photos by Dave Poyzer posted in the photo gallery and come back to Eye on the Trail often for race updates.