Eye on the Trail: Burmeister first to the Coast 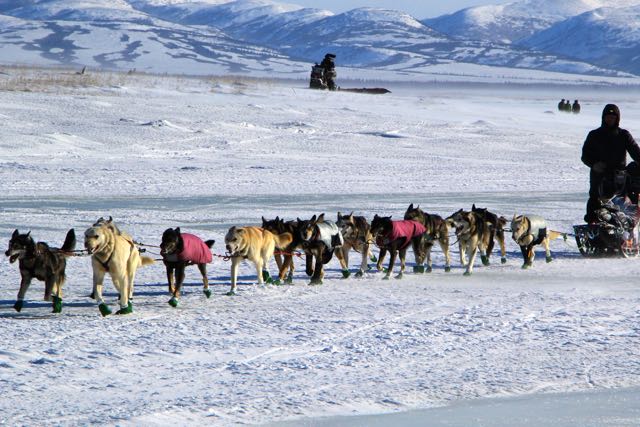 Burmeister, First to the Coast

The first musher has made it to Unalakleet.  Aaron Burmeister of Nome rounded the corner off the Unalakleet River to the Kouwegok Slough with 13 dogs in harness.  Waiting to present the Gold Coast Award were Wells Fargo Bankers, Jake Slingsby, Vice President and Senior Business Relationship Manager along with Jessica Osgood, Nome Store Manager.  They are unmistakable when wearing the bright Yellow Wells Fargo Parkas.

Also on hand to present were Unalakleet residents, Tracy Cooper Unalakleet Community Agent and Dave Cunningham of the Wells Fargo Advisory Board.  The brief presentation ceremony was delayed until Aaron had finished spreading straw for his dogs to bed down on. 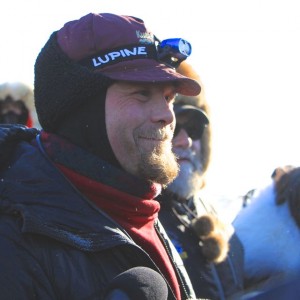 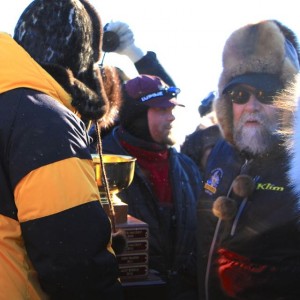 It was a burley day on the slough In Unalakleet.  The temperature is a balmy three degrees ABOVE zero with sunny skies.  Sounds nice until you factor in the 31 mph wind with gusts to 43.  All that combines for a “feels like” temperature of minus 22 degrees.  Many villagers donned warm coats, fur hats and insulated boot and pants to come welcome Aaron to the coast.  The traditional Inupiaq parky worn by the women are beautiful.  It’s almost as good as a fashion show when they come out to meet the mushers. Likewise many of the children are dressed in tradition hats and coats.

Burmeister has really taken a step outside the box in running the whole stretch from Kaltag to Unalakleet, a distance of 85 miles.  He took his 8-hour Yukon River rest at Kaltag so his athletes had plenty of fuel in their bellies after the nice long rest to make such a bold move.  What it comes down to is trying something different.  If you keep doing the same thing all the time, you’ll always have the same results.  Aaron’s plan to change it up may work in his favor.  His closest competitors, Aliy Zirkle, Jeff King and Dallas Seavey all took a break on the old portage trail between Kaltag and Unalakleet.  Aliy blew through Kaltag after taking her long Yukon River rest in Nulato.  She camped about 30 miles past Kaltag.  King and Dallas Seavey blew through Nulato but rested at Kaltag took a break about 30 miles short of the coast.  Each has their specific strategy and in a couple of days we’ll see which was successful.

Burmeister, who’s from Nome commented on how good it felt to be on the coast.  Just like Aaron, his dogs know the coast and feel like they’re at home too.  No question in my mind that this race is far from over.  There will be many strong runs and bold moves along the coast.

Aaron has run a masterful race and will put together strong runs all the way to Nome.  Aliy is really hungry and she’s got some younger dogs on her team that are very enthusiastic.  King and Dallas Seavey are very close behind with many tricks up their sleeves.  This is really a great race. 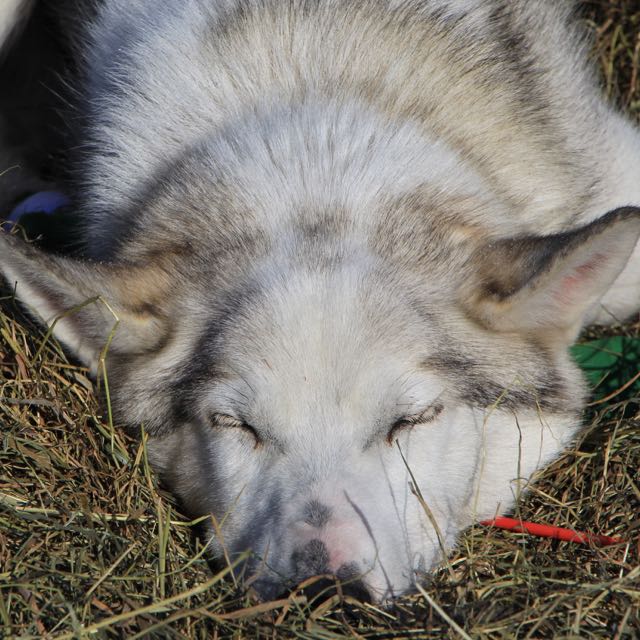