Eye on the Trail: Busy in Nome as Mushers 34 to 39 Arrive 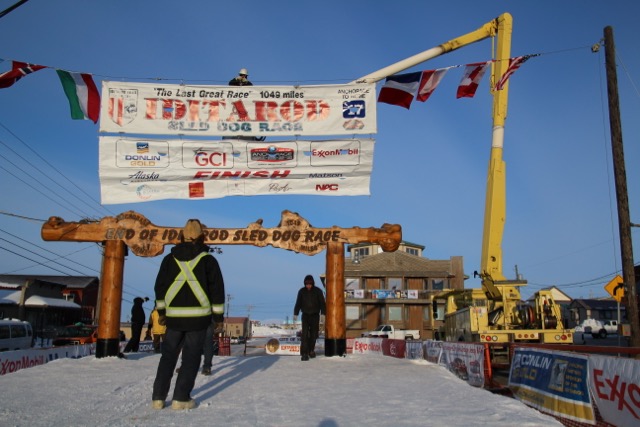 The Banner is Hoisted Once again Over the Burled Arch

After Seth Barnes cleared the chute but before Karin Hendrickson arrived, the bucket truck from the power company arrived to assist in re-hanging the Iditarod banner. A storm came through Nome earlier in the week and officials decided to take the sign down rather than let the wind tear it to shreds. Today the banner was rehung to provide the ”whole” Burled Arch experience for the finishers.

Scott Smith from Willow has completed his 6th run to Nome in 34th place. Smith made his first trip to Nome in 2004. He’s completed three consecutive Iditarod runs since 2015 with his best finish of 10th place being in 2016 with a time of 9 days, 1 hour and 33 minutes. His 2017 race time was 9 days, 20 hours and 26 minutes. Smith started his mushing career in Wyoming then moved his kennel to Alaska. Smith is also a Yukon Quest Veteran. When Smith was asked about the race at the finish line, he said, “I’m down to the nuts and bolts of my dog team – this is the core of my team. It’s amazing to see what they can do.”

Nathan Schroeder was very happy to finish this Iditarod run in under ten days.  To be exact, his time was 9 days, 21 hours and 8 minutes. When interviewed at the Burled Arch, Nathan said, “We had a good race. We had a stomach bug but once we started feeling better, everything went well. We were in under ten days – pretty good. These dogs are tough as nails.” Schroeder, a millwright from Warba, Minnesota, ran his first Iditarod in 2014. Then he approached the Iditarod as a once in a lifetime event.  But then he did the Iditarod and now Nathan says he can’t get enough. Schroeder and his dogs wearing their Local 1348 Millwright dog coats arrived in Nome in 35th place. His best finish was in his rookie year when he place 17th and earned the Jerry Austin Rookie of the Year award. 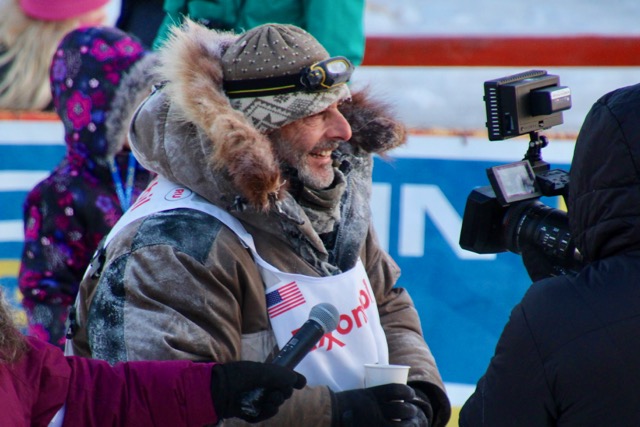 Finishing in 36th place is French born Nicolas Vanier. Nicolas completed his rookie run to Nome in 9 days, 21 hours and 40 minutes. Vanier, age 54, started traveling the north-country at the age of 18. He’s traveled through Canada, Alaska, Norway and Siberia. Nicolas has spent 4 years in Siberia where he’s done about 20,000 miles in dog team exhibitions. Vanier, who now lives in Paris, France, has also completed the Yukon Quest.

Seth Barnes returns to Nome to stand under the burled arch for the second time. He raced the Fairbanks to Nome route in 2015 and again in 2017. The 2015 race was known for its bone chilling weather between Nenana and Koyukuk. Much the same was true for 2017.   Barnes who is a native of Alabama might have appreciated warmer temperatures. Barnes finished 35th in his previous race but made the Burled Arch in 37th place this morning. Even though his position dropped slightly, he improved his race time from 11 days, 6 hours and 5 minutes to 9 days, 20 hours and 22 minutes. Great job to Seth and his racing team.

Karin Hendrickson stood under the burled arch as an Iditarod finisher for the sixth time today. With an elapsed time of 10 days and 52 minutes, Hendrickson claimed 38th place just two places off her best finish of 36th place in 2014. Her time in 2017 is her best time by nearly a day. Hendrickson considers herself lucky to be on the trail. While training in 2015 she was hit be a vehicle while on a training run and suffered spinal injuries. Her dogs escaped injury. It took a year of rehabilitation to get back on the sled. Completing the race in 2016 was a real landmark for Karin. Hendrickson saw her first sled dog as an Iditarod volunteer in 2002. A year later she sold everything she had and came to Alaska to be a handler. After two years, Karin says she tried to quit the dog habit but realized that the Alaskan Husky was a part of her personal fabric. 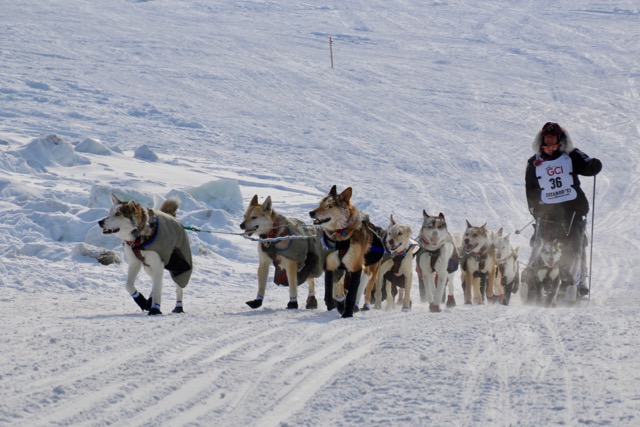 Allen Moore who together with Aliy Zirkle owns and operates SP Kennel. As kennel partners, Moore and Zirkle have a unique arrangement with who is running what team for which race. Moore takes the kennel “A” team for the 1,000 mile Yukon Quest while Zirkle enters a puppy team in the Quest 300. Virtually just a month later, Zirkle takes the “A” group out for Iditarod while Moore takes the kennel “B” team on a training run to Nome. Moore has finished 9 of the 10 races Iditarods he’s attempted since 2007. He runs the back of the pack with the younger dogs, helping them to learn the routine of trail camping, checkpoints and different portions of the trail. Moore says he may not have the fastest dog team in Iditarod but the development of the dogs that he sees over the length of the race is rewarding beyond words. Moore finished the 2017 Iditarod in 39th place with a time of 10 days, 1 hour and 24 minutes. Moore grew up in Arkansas. He says it was too hot there so the family moved to Alaska. Moore is a Yukon Quest champion.