Eye on the Trail: Carson, Rosenbloom and DeNure Arrive in Nome 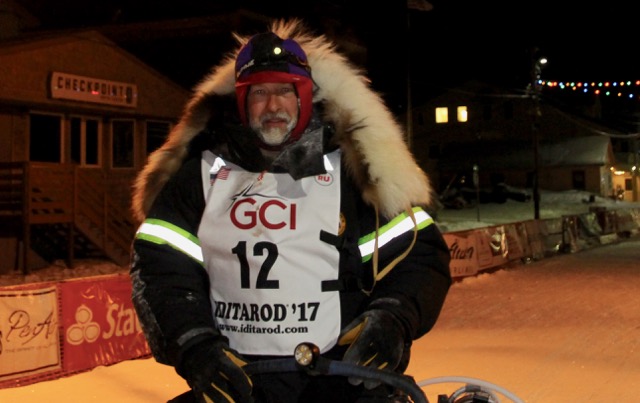 Joe Carson is in Nome. He arrived in 55th place to finish his rookie Iditarod run. At the Burled Arch, Carson went to each dog on the gangline with a simple but clear message – GOOD JOB! During the Arch interview, Carson joked about wanting oxygen while running up the hills and having his back replaced. Really what he was saying is that the race is tough on a sixty-year-old guy when he’s using muscles he didn’t remember he had.

Carson was running Savidis dogs from Snow Hook Kennel. Of course Justine was on hand to welcome the musher and team. Justin congratulated Joe and was clearly pleased with the excellent condition of the dogs.   Joe finished the race in 11 days, 13 hours and 38 minutes.

Joe Carson carried the ashes of his grandpa, Carl Fritzler, on this journey to Nome. Fritzler was one of the trail breakers for the first Iditarod. His grandpa’s connection to the Last Great Race™inspired Joe to make the Iditarod run to Nome. 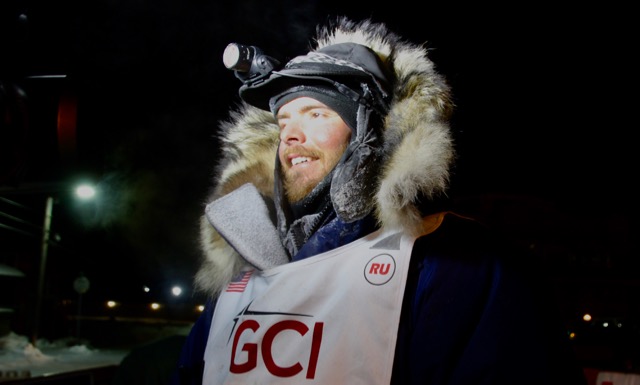 Thomas Rosenbloom at the Burled Arch

Finishing in 56th place is rookie Thomas Rosenbloom. As a Junior in college, he watched an Iditarod documentary, “The Toughest Race on Earth.” From that time forward he knew Iditarod was in his future, but how? After earning his degree in Psychology, Thomas worked and traveled. Then he took a very definitive step in making sled dogs and Iditarod a part of his personal fabric. He applied for a job as a handler at the Santos Wolf Den Kennel in Cantwell. Thomas has worked there for two years and says, “I have loved my two years in Cantwell and am determined to finish Iditarod with healthy happy dogs.”  Goal accomplished as of early morning on March 18th.

Not only were his dogs happy at the finish, so was Rosenbloom. With energy and enthusiasm, Thomas went to each dog on his line exclaiming “GOOD JOB – GOOD JOB.” The energy Thomas used to deliver the message of praise was equal to the energy expended by the dogs during the race. It was a privilege to see this young man mature in his mushing skills and his dogs mature in their trail skills and to witness the celebration between dogs and musher under the arch. Rosenbloom completed his rookie run in 11 days, 14 hours and 49 minutes. 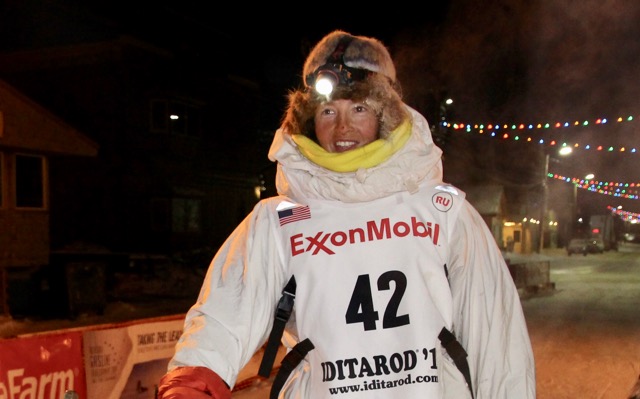 In Nome for the first time since 2008 is Zoya DeNure. DeNure covered the distance from Fairbanks to Nome in 11days, 19 hours and 24 minutes. It was important to Zoya to make Nome this year as she’s scratched for various reasons in five recent tries. Zoya thought of this Iditarod as a journey rather than a race.  With this mind set, she took one run at a time.  The strategy contributed to the success of this run. The dogs she brought to Nome are young dogs so giving them extra rest along the trail was important. Zoya was vey pleased with how the young dogs matured during the race.  In evidence of this were two young leaders who took over for an experienced tried and true leader.

When interviewed, Zoya talked of the love she has for her dogs. Making this 1,000-mile journey with these young dogs seals the bond of trust between dogs and musher and musher and dogs.

DeNure had a very glamorous career as a model working in France. She grew tired of the pressures and triviality of the profession. With a dream of working with sled dogs, she returned home to Wisconsin then packed one bag and headed to Alaska. Her plan was to run, live and breath sled dogs. With a focus on positive training techniques, Zoya and her husband John Schandelmeier operate a kennel devoted to rescue and rehabilitation of unwanted sled dogs.

This trio of mushers arrived in the very early hours of Saturday. More mushers will be filing into Nome during the day and early evening hours. It would appear that all the mushers will make the Burled Arch and the widow’s lamp will be extinguished yet today.  The final musher, Cindy Abbott departed White Mountain very close to 0500 Saturday morning. Giving her twelve hours to complete the 77 mile run to Nome, she’s likely to see Front Street about 1700 this afternoon.  Don’t list Cindy as the 2017 Red Lantern winner just yet.  Positions in the back of the pack often change over the final 77 miles.  Keep your eye on the tracker.