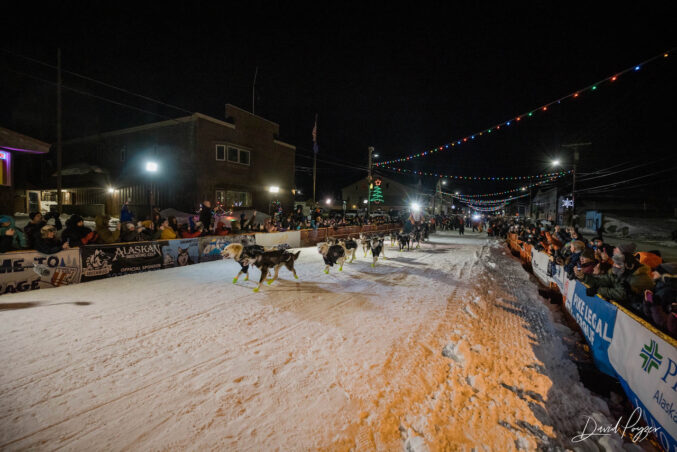 Sass grew up in Excelsior, Minnesota then moved to Fairbanks to attend UAF and ski on their Nordic team.  When Sass saw a neighbor go by with a dog team, he promised himself he was going to do that someday.  When he first acquired dogs, he enjoyed long camping trips and adventures with his canine friends.  He took advantage of the opportunity to train with Susan Butcher and David Monson. 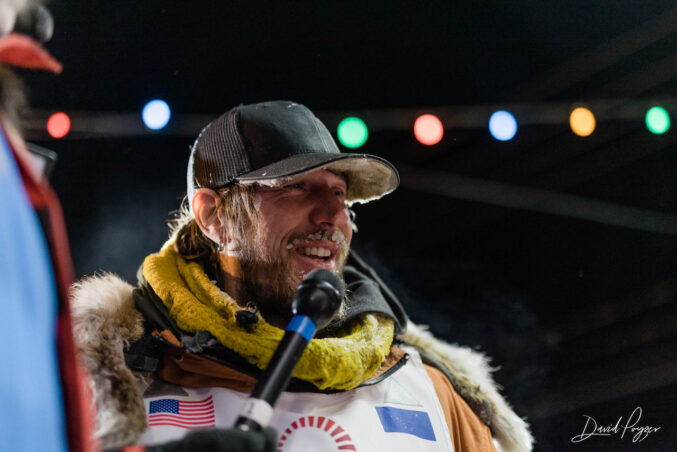 Dogs give Brent the opportunity to explore places otherwise inaccessible.  Living with dogs is a way of life that he embraces, cherishing the relationship he has with each and every dog in his kennel.  Part of the adventure of mushing is getting to know each dog’s behaviors and personality traits.   Sass is known for his positive attitude that we witnessed time and time again through Insider video clips and interviews.  His attitude coupled with advice he received from his grandfather, “never give up,” have carried Brent to the level of a revered champion of the most grueling long distance sled dog races North America offers. 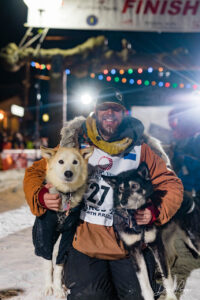 Sass had 11 dogs in harness when he triumphantly crossed the finish line to win the Iditarod 50 title in 8 days, 14 hours, 38 minutes and 43 seconds. Of course, Sass could not have made it the approximately 975 miles from Anchorage to Nome without his teammates: Slater, Pink, Garnet, Marble, Morello, Lucy, Woody, Tock, Capone, Pop, Arlo, Kutuk, Jackson and Draco.

A word about the leaders that brought Brent to his Iditarod Championship.  Slater, a blonde male, was named after characters in the movie Dazed and Confused.  Brent describes Slater as one of the most happy and loving dogs in the kennel.  He listens very well and is eager to please.  Bruce Lee remarked on how Slater always had an eye on Brent as he worked with the team during rests.  Seven year old Slater is a Quest Champion, an Iditarod veteran and now an Iditarod Champion.

Morello is part of the “Orange is the New Black” litter.  Sass calls Morello “a force to be reckoned with” and says she has a strong personality and has become one of the main leaders in the kennel.  She’s eight years old and has competed in the Copper Basin 300, the Yukon Quest and the Iditarod.  Today she’s honored with yellow roses as an Iditarod Champion.

Winning Iditarod 50 comes with the largest percentage of the $500,000 purse for the 2022 race. On his charge to Nome, Sass also won the GCI Dorothy G. Page Halfway Award, The Lakefront Anchorage First Musher to the Yukon Award, Bristol Bay Native Corporation Fish First Award, Ryan Air Gold Coast Award and Northrim Bank Achieve More Award. His winnings from those awards total $13,000 in cash and gold nuggets in addition to 25 pounds of salmon, a gourmet five-course meal, Alaska artwork and a $1,500 donation to charity in White Mountain.

As the winner of Iditarod 50, Sass adds more mushing accolades to his career. He is a three- time Yukon Quest champion and six-time Iditarod finisher. His best finish in the Iditarod was last year, coming in third. That followed a fourth-place finish in 2020. He won the Iditarod’s Rookie of the Year Award in 2012, finishing in 13th place in his first year competing. He is also a previous winner of the Herbie Nayokpuk Memorial Award. This award is voted on by the checkers in the checkpoints as the musher who best epitomizes the spirit of sportsmanship and humanitarianism while competing in the Iditarod.

At the burled arch in Nome Sass said this victory was even sweeter because Dallas is a fierce competitor and one of the greatest mushers in Iditarod history.  He expressed pride in raising and training every dog on his team and having them handle every condition and challenge the trail presented.

Mushers currently on the Iditarod trail will continue to make their way to Nome as winners. The race finishes when the last musher crosses the finish line, claiming the Red Lantern, a longstanding Iditarod symbol of perseverance, and extinguishing the Widow’s Lamp, an Alaskan tradition dating back to the days of roadhouses.