Eye on the Trail: Day 9 in Unalakleet

Day nine of Iditarod XLV and all of the action is between Old Woman Cabin on the Kaltag Portage Trail and Front Street of Nome. What Mitch Seavey accomplished this year in winning the race and setting not one but two records is just plain phenomenal! He already had the record for the oldest winner at age 53, now he extended that to 56. When he set the first age record he said something about ‘this one is for the older gentlemen.’  I think what he was really saying was age is a matter of the mind, if you don’t mind, it doesn’t matter.

Smashing the time record by 8 hours is remarkable and that’s an understatement. Sure the trail was fast and hard with a few sugary spots along the way and sure the trail was a few miles shorter, 18.95 to be exact, but he’s set a decisive new time record. I’m sure Iditarod fans around the world were estimating his arrival time in Nome and doing rough calculations as to what his race time would be and knew that he was on pace to annihilate the previous record of 2016 of 8 days, 11 hours, 20 minutes and 16 seconds set by Dallas Seavey in 2016.

At the Musher Banquet in Anchorage, Mitch put Dallas on notice as to his intent to win Iditarod XLV.  Indeed he did, Mitch Seavey made Nome in 8 days, 3 hours, 40 minutes and 13 seconds. Mitch crafted an incredible race and executed his plan to perfection. Winning Iditarod takes more than just eight days and some hours.  It takes years of breeding, training puppies and conditional of the adult racers. Seavey has been the name on the Iditarod trophy for six years running, Mitch twice and Dallas four times. Add the Jr. Iditarod to that when son Conway won in 2012 and 2014. It’s safe to say, the Seavey’s are the reigning family of Iditarod. 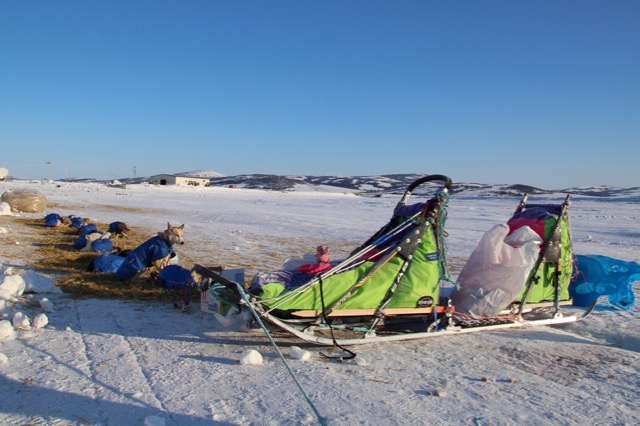 Getting back to teams just arriving at the coast. While Kristin Bacon was still in the Unalakleet checkpoint seven mushers joined her to park on the slough. Rookies Thomas Rosenbloom, Michael Baker, Misha Wiljes, and Joe Carson arrived for their first Unalakleet experience. After doing their dog chores, they would enjoy hot off the griddle sourdough pancakes and all the bacon they could eat. Then they’d have the choice of entrees delivered by community residents – smoked and seasoned salmon, baked halibut and other local specialties. Veterans Matt Failor, Zoya DeNure and Al Eischens know about the Unalakleet hospitality and were undoubtedly looking forward to arriving at the checkpoint. Matt Failor often enjoys another tradition. His birthday falls about the time he arrives at the coast. In the past, some of his lower 48 fans have ordered pizza from Peace on Earth to be delivered to the checkpoint for mushers and volunteers to enjoy and celebrate with Matt.

Incoming from Old Woman Cabin will be rookies Roger Lee, Peter Reuter, Paul Hansen, Jimmy Lebling and Veteran Cindy Abbott. Bedding down at the shelter cabin over night was a good move to rest the dogs before completing the run to the coast. Temperatures were well below zero at Unalakleet this morning and would have been colder on the trail. The final group of mushers seems to be taking turns at the Red Lantern position.

Al Eischen’s team was enjoying the morning sun on the slough. Al runs a sled with a colorful bag. On that bag he has a chicken. One of his young Unalakleet fans told me that Al carries that chicken on all of his races.  Eischens runs for the cause of Pediatric disease awareness.  He is transporting ashes to Nome for families who’ve lost children to illness.

A village resident was sitting on his 4-wheeler by where Al was parked. He was talking fishing and explaining how they use nets under the ice. He says the ice here is 4 feet thick but up in Kaltag it’s only 2 feet thick. It’s easier to fish through the ice up there.  The salmon caught in Kaltag is oilier than the salmon caught here on the coast. He prefers the oily salmon. Louis Ambrose who is from the area is planning to run Iditarod again.  His family will be catching fish for him. Ron, the man we were talking to, is one of his nephews. That gives you an idea of the difference between the professional mushers and the village mushers and how they are supported.