Eye on the Trail: Deeter, Royer and Peck Finish 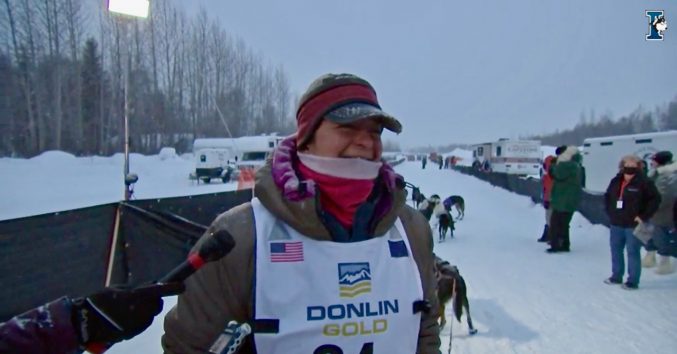 For Jeff Deeter mushing is about, “experiencing the trail with my dogs and living the unique dream.  The Iditarod is unlike any other event, and running this trail with my four-legged friends is truly amazing.”  Deeter earned his Iditarod finisher’s belt buckle in 2008 placing 59th.  He took ten years off to build his kennel and establish a tour business.  During that building time he also studied and analyzed years of Iditarod racing statistics.  His goal when returning in 2018 was to run at a more competitive level.  Since then he’s finished in 15th and 16th place.  Moving up to 12th place this year aligns with his goals.  He too will challenge the top 10 in future races.

Jessie Royer began her work with animals while growing up on a cattle ranch in Montana.  She’s worked as a horse wrangler and horse teamster.  She acquired her first sled dogs at the age of 15.  Who better to learn from than 4 time Iditarod Champion and Montana resident, Doug Swingley.  Royer established her own kennel in Montana then moved north to Alaska in 1998.  Royer won Montana’s Race to the Sky when she was 17.  She was the winner of the invitational La Grande Odyssée in France in 2005.  Royer is 19 for 19 on the Iditarod trail.  She’s been in the top 10 eight times with a personal best of 3rd place.

Aaron Peck and his wife, Eva consider it a “privilege to raise their three children in a dog filled environment.  The dogs offer them so many opportunities to learn and grow.”  Peck has finished six of the eight Iditarod races he’s attempted.  His previous best finish was 23rd.  Making the finish line in 13th place is a significant improvement for Peck and team.  Aaron began mushing in 1992 after watching ABC’s Wide World of Sports.  He distinctly recalls Susan Butcher’s victories he saw on television.  The Peck family lives in Alberta Canada.  They operate Elevation Dogs Boarding and Training Center as well as Elevation Sled Dogs Racing and Tours.

An Insider interview with Jessie Royer at the finish line was very informative about various sections of the trail.  As Jessie came into the Deshka Landing chute, she carried a camera collecting video while she approached the finish line.  She told Insider that a few miles outside of Skwentna, she came upon Jeff Deeter who was stopped in the trail.  A cow moose was blocking his progress.  Royer joined the standoff.  Jessie said they tried everything to get her off the trail – banging cooking pots with axes, making ourselves big, even throwing things at her.  She still stood her ground and even bluff charged a few times.  Finally Royer and Deeter just backed off.  The moose lost interest and retreated down the trail and finally went into the woods.

During the interview Mat-Su Borough Mayer Vern Halter asked Jessie about the Gorge and the Steps.  She tanked him for ordering snow.  There were about six inches and that made a world of difference, especially in the Buffalo Tunnels.  Jessie described the trip down the Gorge as fast and furious with little time to do anything but maneuver the sled.  Going up however, moving at 5 or 6 miles an hour, the pace was leisurely enough to do some sight seeing.  Royer joked, “Who knew snow and sleds worked so well together?’