Eye on the Trail: Early Entries for Iditarod XLVI 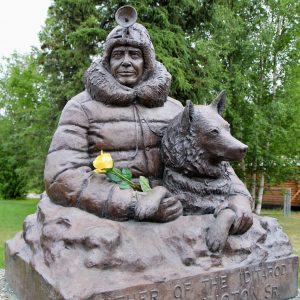 It’s the Eve of musher signup for Iditarod XLVI. Already seventeen mushers have indicated their intention to run by filing preliminary paperwork. Signup officially begins at 9:30 am on the last Saturday of June. The volunteer picnic and musher signup is a gala event enjoyed by all for the friendship, camaraderie as well as the fine food served up by Golden Corral.

Looking under the Race Center pull down tab on Iditarod’s front page, you’ll see those who’ve “indicated” they plan to run. The list includes two rookies and fifteen veterans. Four-time champion Dallas Seavey is the only former Champion who’s on the “planning to run list” but there are plenty of familiar names on the list with Dallas. How about a quick run down…

Rookies heading to Nome in the 2018 Iditarod include Brett Bruggeman of Great Falls, MT and Matt Hall of Two Rivers, Alaska. Bruggeman and his 16-year-old son had both been thinking about running dogs but neither had mentioned their desire to the other. Once their desire to work with sled dogs became known to each other, they’ve been training under the mentorship of Doug Swingley and Terry Adkins and have been racing in Montana and Oregon.

Matt Hall will run his fifth Yukon Quest and his first Iditarod in 2018. Hall who is from two Rivers, Alaska is the reigning Quest Champion. Matt is 25 years old.

Race fans can expect to see many familiar faces for the upcoming Iditarod. Pete Kaiser from Bethel has 4 top 10 finishes and hopes to add another while Richie Diehl is looking to break into the top ten for the first time.

The SP Kennel team, Aliy Zirkle and Allen Moore have sent their paper work for the 2018 race. Moore is in for his 11th race and Zirkle who has run every race since 2001 is back saying her goal is to win the Iditarod with the incredible dogs she breeds, raises and trains. Since 2012 Zirkle has captured six top ten finishes with three second place finishes. Zirkle is the only woman to have won the Yukon Quest and Moore is a two-time Quest champion. Moore has received two Sportsmanship awards during his Iditarod Career.

Three mushers from the Yukon Territory are planning to run in 2018 – Gerry Willomitzer, Michelle Phillips and Rob Cooke. Willomitzer is coming to his 8th Iditarod with a new generation of dogs. Michelle Phillips ran her first Yukon Quest and fell in love with long distance mushing, doing the Iditarod every year since 2010. Her 13th place finish in 2017 is her personal best. Rob Cooke returns with his all Siberian team. Cooke is a Quest and Iditarod Veteran.

A couple of hockey players say they’ll be on the trail again for 2018. Mats Pettersson of Sweden defended the goal in half-professional hockey. The Swedish champion of long distance mushing has placed between 29th and 25th place in his previous four Iditarod runs. Jason Campeau who’s also played plenty of hockey says the game prepares people for the challenges of real life. Campeau has run in 2015 and 2016.

After completing the race in 2017, Zoya Denure plans to make the run to Nome again. Denure ran a solid race and her dogs performed very well in 2017. She was extremely glad to make Nome as she’s had several scratches since her rookie year in 2008.

Add two more women to the list for 2018, Jessie Royer and Laura Neese. Royer will be in for her 16th Iditarod and Neese for her 2nd. Jessie has finished in the top ten 6 times with her best finishes being 4th in 2015 and 5th in 2017. Neese had a solid run in 2015 finishing in 42nd place. Having experienced the trail she has a much higher finish in mind for her next trip to Nome.

Linwood Fiedler has run 23 races since 1989 plans to compete in 2018. Fiedler from Willow, AK has finished in the top ten four times including 2nd place in 2001.

That’s how it looks with mushers who’ve turned in preliminary paper work for the 2018 race. By late afternoon on Saturday, the first chapter of Iditarod XLVI will have been written. Officially both the Iditarod and Jr. Iditarod begins accepting entries on the last Saturday of June. Check the musher listings Saturday evening to see if your favorite mushers have committed to running the Last Great Race in 2018.