Eye on the Trail: Franklin and Bacon Make Nome

They’ve become good friends over the miles as they traveled in what looked like a little train.  They share the special bond of Iditarod.  Kim Franklin and Kristin Bacon came into Nome one behind the other like a little train and parked under the burled arch side by side.  There was a large crowd and it felt very festive to welcome the two rookies, each with their own story. 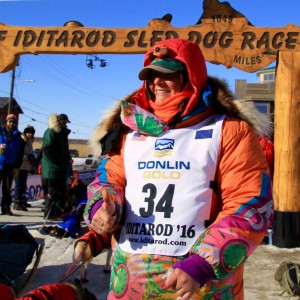 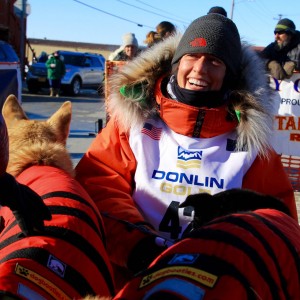 Kim Franklin is a second year rookie.  She’s finished in 68th place with a time of 12 days, 23 hours and 39 minutes to earn the Iditarod Finisher’s Belt Buckle.  Kim said she’s extremely glad to be here and she thanked her amazing dog team.  She made special mention of her 10-year-old leader.

Kim was carrying a UK flag as she came down Front Street toward the arch.    She’s been mushing since the early 90’s.  While running her own Malamute team in the UK, she became interested in Iditarod.  She entered the 2008 Iditarod and withdrew at Rohn.  She finished Iditarod XLIV with a team of Dean Osmar dogs.  She’s happy to finish what she started 8 years back.

When she parked her team at the arch, she looked back for Kristin Bacon.  The two decided to run together and Kim said that really made for a pleasant time.  She said it made all the difference in the world.

Kristin Bacon was only a minute or two behind Kim.  They were both parked under the arch while they snacked their dogs, went through sled check and enjoyed congratulations from friends, family and spectators from near and far.

Kristin first came to Iditarod as a volunteer at Skwentna.  While working as a Skwentna Sweetie, she was introduced to Ryan Redington for that reason.  The two agreed to “talk” after the race.  When they talked, Kristin went back to Bacon’s Acres with Libby.  Libby gave birth to eight pups.  As she was driving home with Libby, she knew her life as she knew it was changing forever.

Bacon learned to mush right along with those pups.  Those pups are four-years-old and have been the nucleus of her team since they first wore harnesses.  With the lack of snow for the past couple of years, It’s been hard to complete qualifying races but finally, her Iditarod plans came together for 2016.  At the finish today, Bacon seemed awed and nearly at a loss for words.  After thanking her canine athletes she said, “We made it.  I’m very excited.  I’ve been envisioning myself finishing this race, standing here under the arch in Nome.  I’m here!”

Kristin has a degree in physical Therapy.  When she’s not working with her dogs or with her clients, she’s sharing the sport of mushing with special needs children.