Eye on the Trail: Hanna, Joar, and Lev 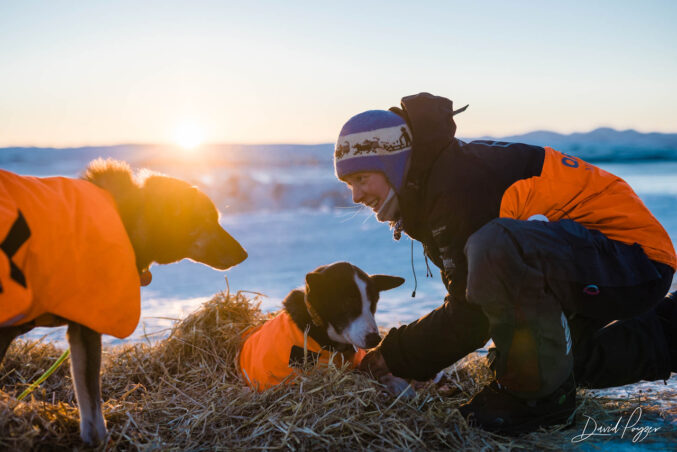 The sun rises behind Hannah Lyrek as she prepares her dogs for their next run. (Photo by David Poyzer)

Hanna Lyrek’s biggest fan is her mom, who ran Iditarod back in 2005 and placed in 37th position with a time of 11 days, 13 hours and 39 minutes.  With a little luck, Hannah will finish her rookie run in the top 20 positions claiming the honor of Rookie of the Year.  Hannah is not only the leading rookie but she’s also the youngest musher at the age of 22.

Lyrek who was born in Alaska, moved with the family to Norway at the age of five.  She’s been in or on a dog sled since a very young age and has driven dogs since she was old enough to stand on the runners.  When she was four, she took a little solo trip.

Hannah says she has been focusing on Iditarod for the past five years.  She has participated in a vigorous race schedule in Norway, doing the longest races to prepare for Iditarod.  The longest race is Norway is 1200 meters or 720 miles.  Unalakleet at mile 714 would be close to that distance.  Lyrek and team are running in uncharted lengths from UNK to Nome.

Lyrek says the dogs are doing well.  She is focusing on keeping them healthy and happy for the rest of the race.  When asked about the wind, Hannah said that it is windy in Norway so the dogs are used to the wind.   She has been traveling with Paige Drobny and is very thankful for coming across Norton Sound with Paige.  The most difficult segment of the race according to Hanna was the Burn.

Unreal is how Hannah labeled her whole Iditarod experience.  She has really appreciated meeting all the wonderful people and watching the dogs perform.  Having pizza in Unalakleet made her day.  When asked by Liz if there was anything she’d like to tell her Mom waiting in Nome, Hannah smiled and said, “Just stay calm, I’ll be there in a couple of days.”

Insider caught up with Joar Leifseth Ulsom in Koyuk.  The 2018 Iditarod Champion was extremely happy to be off the sea ice of Norton Sound.  He said the crossing was very windy and straight in his face.  The dogs charged into the wind super well but five hours of that wind was hard.

Joar grew up in Norway just south of the Arctic circle.  He loved nature, adventure and dogs.  Mushing seemed the best way to combine all three into a profession.  In 2011, Joar moved from Norway to Alaska and brought his kennel of seventeen dogs.    His goal was to learn the ropes of racing.  Iditarod 2022 is his 10th run to Nome.  He has also raced in the Yukon Quest, Copper Basin 300, Kusko 300 and the Nadezhda Hope Race.

In 2018 Joar became a member of the Norway based Qrill Pet Mushing Team.  Winning the Iditarod that year was a dream come true.  Now his kennel, Sivo Racing, is home to sixty Alaskan huskies.  Joar’s wife Margot is a veterinarian and together they operate the kennel and care for the dogs.

Joar has a private pilot’s license and is working towards his commercial pilots license.  Joar and Margot are the proud parents of Henrik who was born in the summer of 2021.  Joar told Insider Liz Raines Failor that he was looking forward to getting home to his family.

Joar has finished in the top 10 in his previous nine Iditarod runs.  His goal this year was to continue that impressive streak.  In his rookie run to Nome Joar captured 7th place  and Rookie of the Year honors with a time of 9 days, 12 hours and 34 minutes.  His personal best time came in 2017, completing the Fairbanks trail in 8 days and 11 hours.

Lev Shvarts described the run from Shaktoolik to Koyuk as gnarly.  The gnarly aspect would be the 40 mph head winds.  There were plenty of unnerving sections of the trail where the markers were missing.  When I couldn’t see the markers, the dogs found their way by the feel of the trail and scent.  Lev said that while the run was a little rough, we’re here and the dogs look good.

Shvarts said it’s been a rough trip in a few places.  Other places like the steps and the gorge were much better than he expected.  The burn was worse than he anticipated especially after last year with the fresh snow.

Lev was born in the Ukraine and is now a proud US citizen.  He grew up in Boston and has a degree in Electrical Engineering.  After establishing a perfectly good career in his chosen field, he decided that sitting in a comfortable office held no appeal.  He decided to leave his perfect career to pursue a life as a dog musher.  His parents may have wondered about his decision.

I happened to be in Nome when Lev finished his rookie run in 2015.  His parents were at the finish line to great him.  They were both in tears while welcoming him to Nome and celebrating his 1,000 mile accomplishment.

Now Lev is a self-employed contractor and he operates a short-run manufacturing and light fabrication/machine shop.  If you want a special piece of equipment such as an ultralight ladle for dog food, Lev is the guy to see.