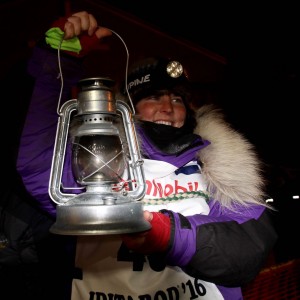 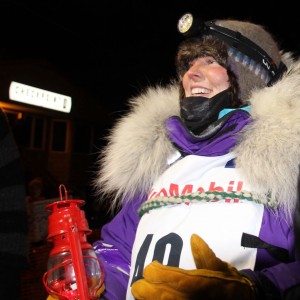 Rookie Mary Helwig made Nome at 2351.  Seems that it’s never too late or too early for a celebration at the burled arch at the end of the Iditarod Trail.  There were people shoulder to shoulder lining both sides of the chute for it’s full length waiting to say welcome to Mary Helwig and farewell to Iditarod XLIV.

As the final musher to cross the finish line she was awarded the Red Lantern and asked to extinguish the Widow’s Lamp.  Friends, family and race fans gathered to celebrate with her on conquering the 1049 mile Iditarod Trail to Nome.  The Red Lantern is awarded in recognition of perseverance.  The Widow’s Lamp is extinguished to indicate all mushers are off the trail.

When interviewed about the race, Mary said it had its ups and downs.  She especially cited the beginning of the race before reaching Nikolai.  A couple of her dogs got loose, she got off the trail, her sled broke and then broke again.  Within the first 300 miles there were enough serious challenges that could have been the end of her race.  “When the going gets tough, the tough get going,”  That little saying applied to Mary as she solved one problem after the other and kept moving toward her goal, Nome.  Of course it helped that she could use a sled belonging to a scratched musher.

One of the things she looked forward to on the trail was returning to a village she previously called home, Unalakleet.  After earning a degree in Psychology from the University of Chicago, Mary moved to Alaska to work for Covenant Youth of Alaska.  While in Unalakleet, Mary worked as a youth leader in the local church and as bible camp cook.  The folks in Unalakleet were just as excited to see Mary as she was to see them. 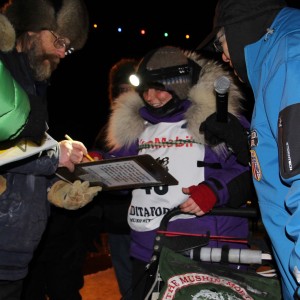 Mary Helwig signs off the trail

Unalakleet was where Helwig had her first experience with sled dogs. While working there she participated in a short women’s sled dog race put on by the Norton Sound Sled Dog Club.  Helwig fell for the sport hook, line and harness.  Since then she’s worked for mushers DeeDee Jonrowe and Middy Johnson.  Now she has established her own kennel and named it after a puppy she got in Unalakleet who has turned out to be the rock of her kennel, BRAVO.  The crowd took up on the theme chanting Bravo, Bravo, Bravo as she came down Front Street.

In 2013 she established her own kennel and began breeding her own line of dogs for her goal of a 2016 Iditarod.  Helwig lost her home and nearly all her possessions in the Sockeye fire last June.  Her dogs were evacuated and some of her costly mushing gear like her parka went out with the dogs.  Only a few days after the fire, Helwig along with other Willow mushers who experienced similar losses were at the Volunteer and Musher Signup Picnic.  They were there to sign up, to move forward.  Signing up to race in the 2016 Iditarod had been Mary’s plan and she like others was sticking to it.

Helwig who is currently training to be a veterinary technician finished the race in plenty of time to attend the Finisher’s Banquet to be held at 3 pm on Sunday afternoon.  Helwig claimed 71st place with a time of 13 days, 8 hours and 51 minutes.  She holds the third fastest Red Lantern time in race history.  Congratulations to Mary for persevering and living her dream.