Eye on the Trail – Joanne Potts Honored by Mushers 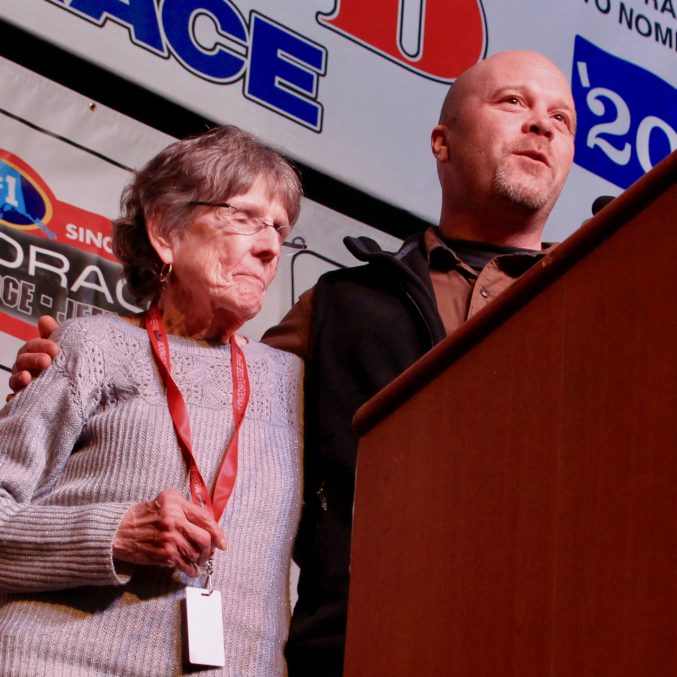 Retirement and Joanne Potts just don’t seem to belong in the same sentence.  She’s become a legend and icon in all the years she’s served Iditarod.  Joanne has been an energizer bunny and great source of encouragement to many mushers.   Walking encyclopedia of Iditarod describes Potts to perfectly.  When playing trivia with an Iditarod category, you’d want her on your team.

Joanne’s association with Iditarod began in 1975 when a neighbor asked if she’d like to volunteer for the race.  Being fairly new to Alaska at the time, Joanne didn’t even know what Iditarod was.  Over the past forty-five years, Potts has worn many hats in the Iditarod organization.  In 1982 she joined the Iditarod staff as Race Coordinator. 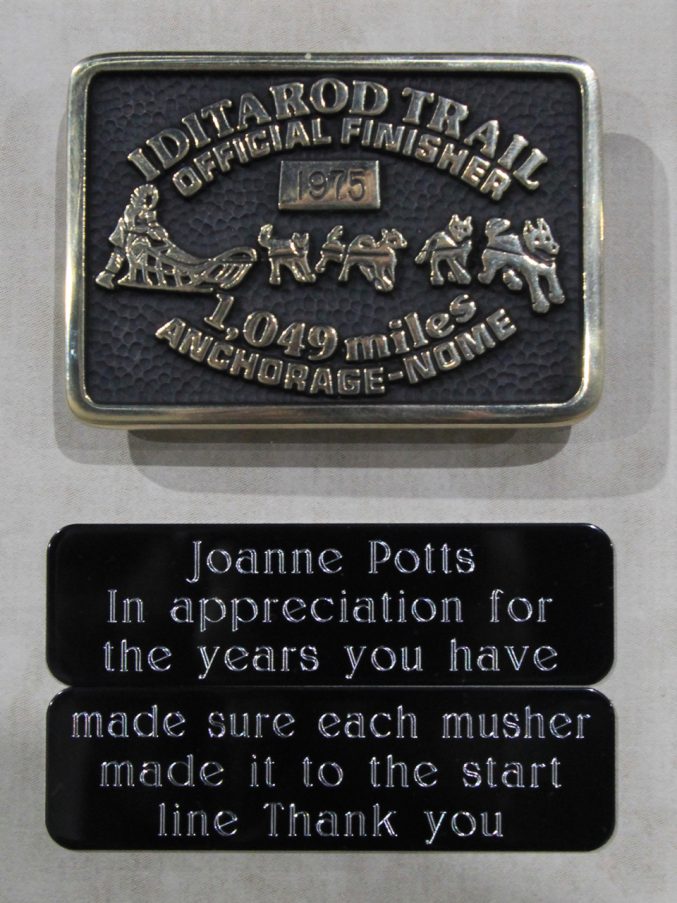 Burmeister thanked Joanne on behalf of all mushers who she has helped in a multitude of ways to reach Nome.  She’s helped young mushers complete their application form when they felt overwhelmed.  She’s reminded mushers about fast approaching due dates and then reminded them again.  She’s encouraged the uncertain.  She’s welcomed women to the race.  She’s supported mushers in a million ways they aren’t even aware of.

Her most recent official title was Assistant to the Race Director.  That’s actually a bit of an understatement because Joanne assisted everyone from mushers to volunteers to veterinarians and the host of other people involved in the race.  Her people skills are exceptional and most importantly she treats everyone with respect.  When mushers had questions, Joanne was their primary contact.  Potts said, “I feel like they are my kids and I take care of them the best I can.”

When writing Joanne’s honorary musher bio for the 2016 Iditarod, there was no lack of gratitude and warm stories when I contacted mushers and volunteers for a word or two on her behalf.  It’s “A” to “Z” and every musher/volunteer in between.

Cindy Abbott said,  “My first contact with Joanne was three days after the finish of the 2011 race.  Even though she was busy working on thousands of post-race duties, she took the call from the crazy California woman who knew very little about mushing or Alaska but wanted to run the Iditarod.  Over the years, Joanne and I became friends,” says Abbott,  “I could go to her for advice and guidance on any issue.  No matter how busy she was Joanne always responded quickly in her positive, supportive and forthright manner.  She’s one of the most kind, caring and hardworking people I’ve ever known.  Her dedication knows no limit.”

When Joanne was named Honorary Musher, Aliy Zirkle said, “Being the Honorary Musher is recognition for Joanne that’s been a long time coming.  Joanne has been an integral part of Iditarod for longer than most of us can remember. When any musher has a question, the answer is always – ASK JOANNE.  Joanne has no favorites.   She cares about everyone.  She’ll help the most disorganized musher (which face it… most of us are) and not think ill of us.  From the bottom of our hearts, all of us thank her for everything she’s put into the race and into the mushers.”

Going the extra mile, getting things done and doing it with a smile is what Potts is known for.  Becca Moore says,  “Our family has had a team in the race since 2005.  I have always admired Joanne’s dedication, hard work and can do attitude. While we’re deep into training and focused on the dogs, Joanne keeps us up to date and informed on things we need to know.  She is genuinely concerned for mushers and their families from sharing in the joys of the birth of a baby to concern and support during a family hardship and all things in between.”

Jeff Schultz, who’s been focused on the race for almost as long as Joanne has said, “I photographed my first race in 1981 and Joanne was there and as always was happy to help a newbie.  I believe Joanne has been the best public relations person for Iditarod it could ever have had.  Not in the sense of sending out press releases or talking to the press but she has helped countless mushers, sponsors, volunteers and staff in getting answers and/or results for anything they need.  She has helped the Iditarod name and race by going the extra mile in everything she does including doing her best to see that people are satisfied.  Over the 40 plus years she’s served Iditarod, she’s done tons to perpetuate the race.”  Jeff even calls Potts the “Iditarod Answer Woman.”  He says, “If you have an Iditarod related question, she can answer it or she’ll find out and get back to you, sooner rather than later.”

From the perspective of so many teachers on the trail, Potts has been the Teacher on the Trail travel agent getting them from home to Alaska and back to be the direct link between the race and classrooms around the world. 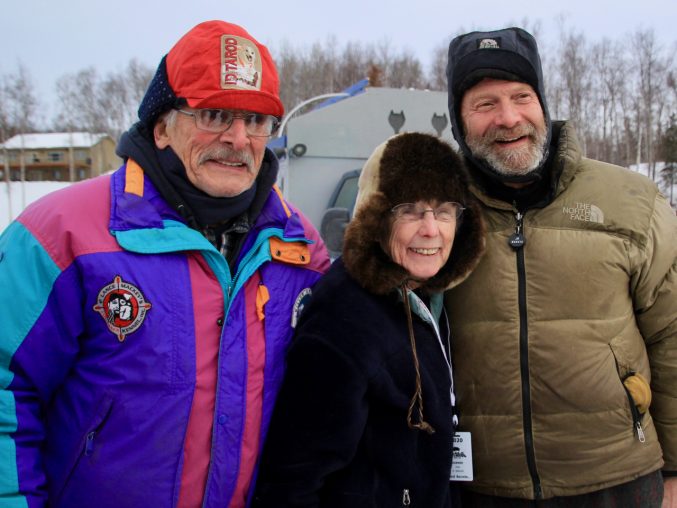 Potts has been a great advocate for the Jr. Iditarod and the young mushers through involvement with the board, serving key positions for the Jr. race and just being there to answer questions and provide support.  She’s watched many kids grow up from the cradle to the sled and has delighted in seeing them come full circle from running one dog races, the Jr. Iditarod and then running the Iditarod.

It would be impossible to list all of the things Joanne has seen to in her long career with Iditarod.  She has inspired many with a can do attitude and she’s helped many realize their dream of mushing long distance in the Last Great Race. Over the years Joanne has been the chief nurturing officer of Iditarod (aka extraordinary Mother Hen).  To be honored by the mushers with a finisher’s belt buckle speaks volume in gratitude and thanks.  Joanne is loved, appreciated and respected by the Iditarod nation.