Eye on the Trail: Jonrowe and Johnson at the Arch

Make it 32 finishes out of 35 starts for the Lady in Pink. Not surprising, the breast cancer survivor has made pink her signature color for herself, booties, dog coats, sled bag and even her dog truck. DeeDee Jonrowe has been one of the first ten mushers to make Nome on 16 occasions. Her best finish was 2nd behind Jeff King in1993 and 1998. The mayor of Nome, Richard Beneville, was there to welcome DeeDee at the Burled Arch.  A throng of DeeDee fans joined the mayor to welcome their hero who has made so many trips to Nome. DeeDee arrived in Nome in 47th place with a time of 10 days, 22 hours and 3 minutes. Her best time was in 1998 – 9 days 8 hours and 49 minutes. 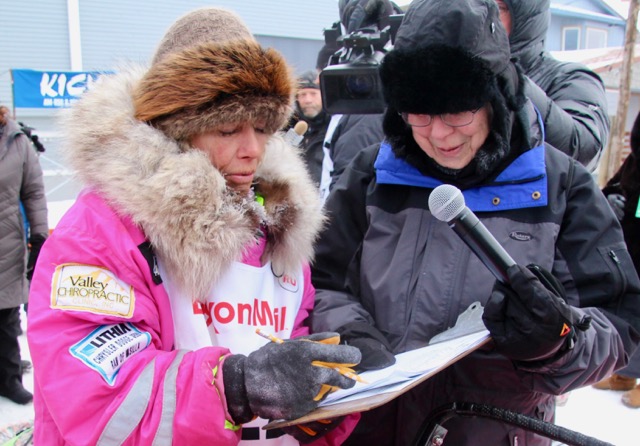 DeeDee Signs off the Trail for her 32nd Iditarod Finish

Jonrowe was her usual animated self at the finish, interacting with fans and praising her canine athletes at the same time as she passed out snacks to her dogs. When interviewed she said, “We race for our own personal reasons. I’ve found that out more than ever over the last few years. Each race has something very special.”

What can you say about the Lady in Pink? She’s faced challenge after challenge but always returns to her comfort zone, running dogs across Alaska.  Thank you DeeDee for being an example of perseverance for so many people in so many ways.

Reaching the Burled Arch in 48th place was Gunnar Johnson of Duluth, Minnesota. When Gunnar was 11 years old he saw Jim Lanier’s slide show on his first Iditarod. Johnson says that was the moment that changed his life.   He remembers his first Iditarod of 1991. He says, “I was 22 when I started and by the time I got to Nome, I felt like I was 40. I gained a lifetime of knowledge between Anchorage and Nome.” The Duluth, MN City Attorney says he’s sort of an accidental musher in Iditarod 2017. Johnson took over Jim Lanier’s team for 2017 when Jim had knee issues. 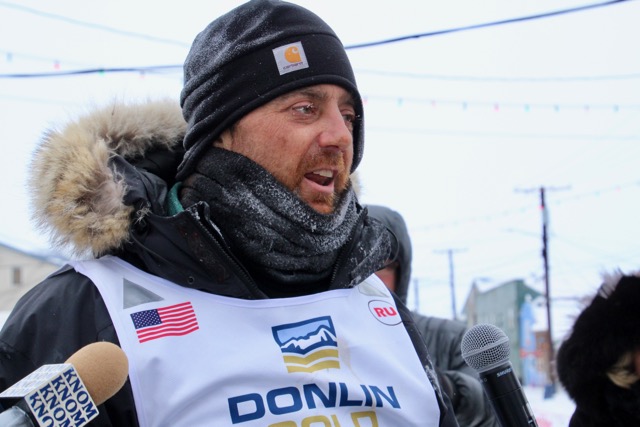 Gunnar Johnson with a New Personal Best by 12 Days

At the finish line as he was about to sign off the trail he asked if his time was 10 days. “Yes,” came the answer from the announcer, “Your time was 10 days, 22 hours and 4 minutes.” Gunnar replied, “My time in 1991 was 22 days and 57 minutes. It’s been 26 years since I’ve been on the Iditarod Trail and my time is twelve days better!” Johnson has been back in Alaska for other races like the copper Basin 300, the Northern Lights 300 and the Denali Doubles.

Johnson and Jonrowe made many of the runs between Fairbanks and Nome together. At the finish line they congratulated and thanked each other for encouragement and help along the way. There is a very special bond shared by mushers in this race.