Eye on the Trail: King Makes a Baker’s Dozen 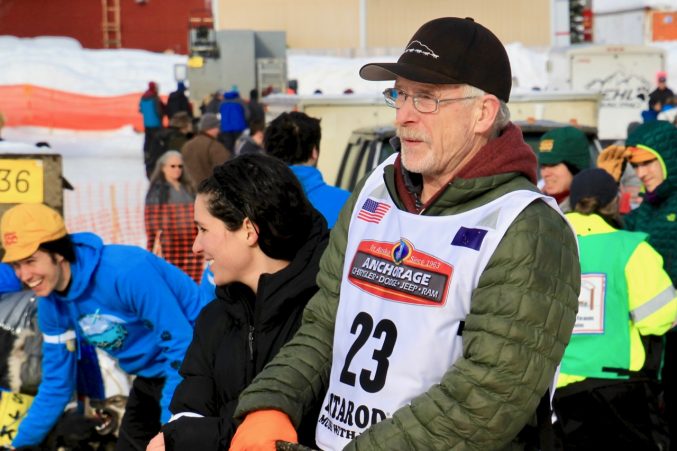 Jeff King at the Restart of Iditarod XLVII

Jeff King, one of Iditarod’s four time champions arrived in the chute at 04:07 on Thursday morning March 14th to claim 13th place.  This race marks King’s 29th run and his 26th finish.  His run to Nome in Iditarod XLVII lasted 10 days, 13 hours and 7 minutes.  His average speed was 3.90 miles per hour.

King earned his Iditarod championships in 1993, 1996, 1998 and 2006.  He has an outstanding race record that goes beyond Iditarod.  Jeff won the Yukon Quest in 1981 and he has nine Kuskokwim 300 victories.  Sled dog racing is a perfect fit for his competitive nature, athleticism and understanding of the canine athlete

Of King’s twenty-nine Iditarod runs, he’s finished twenty-six and has been in the top ten 20 times.  He’s been in the top five fourteen times.  Jeff has never had an 8 day finish time but came oh so close in 2017 on the fast trail from Fairbanks to Nome in 9 days and 46 seconds!

Beginning with a 6th place finish in 1992, King built a string of 13 consecutive top ten finishes.  If you’re familiar with the archives section of the Iditarod webpage with top ten finishes highlighted in orange – King’s page is VERY orange!

Jeff has received two Iditarod Humanitarian awards and the Joe Redington, Sr Award along with a long list of awards for being the first team to make McGrath, Halfway, Gold Coast and the Yukon.

King came into Nome behind a team of 13 tail wagging speedster.  He probably set a speed and time record between the Burled Arch and the Nome Dog Yard.  Those dogs were ready to roll on down the trail.

In his Insider interview King said he was pleased to have been on the trail with so many great mushers.  He enjoyed following Peter Kaiser and Joar Leifseth Ulsom as they both ran great races.  King said, “It’s a great day for Iditarod to have a champion born and raised in Alaska.”