Eye on the Trail: Musher Banquet 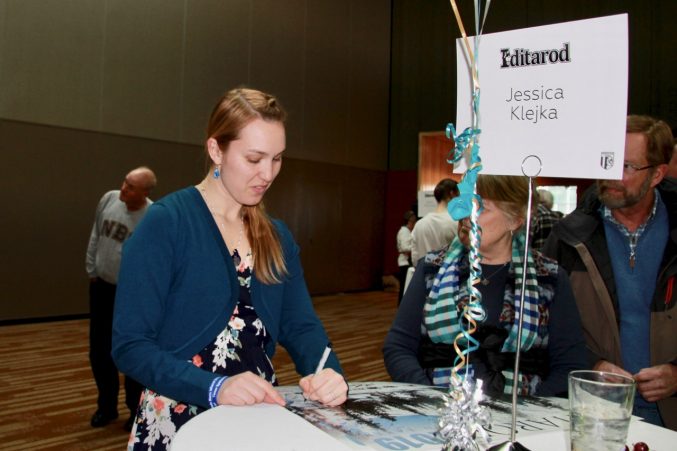 It was an extended day for the mushers of Iditarod XLVII.  They attended the all day musher meeting.  There was a break at lunch when the mushers and Idita-riders enjoyed conversation over a pizza lunch.  Then they participated in the Meet Greet prior to the Musher Banquet.

The musher meet and greet began at 3:30 in the Denaʼina Center in downtown Anchorage with the Musher banquet following at 6:00 pm.  It was a festive evening enjoyed by about 1,400 friends, family, sponsors and Iditarod fans.  Hobo Jim was on stage to add his musical talents to the gala event.  He played and sang his famous Iditarod Song more than once. Iditarod fans are familiar with the song and joined in on the chorus.

The honorary mushers for Iditarod XLVII were introduced.  The Iditarod Trail Committee Board of Directors selected Ed and Cathy Rasmuson for the distinction.  Board President, Mike Mills says, “Ed and Cathy live their lives by the principles of helping their fellow Alaskans.  You can see that through the work at the Rasmuson Foundation and with their everyday lives as a third-generation Alaskan family.  They also embody many of the characteristics of what makes this race a treasured Alaska tradition, including perseverance, strength and hard work.” 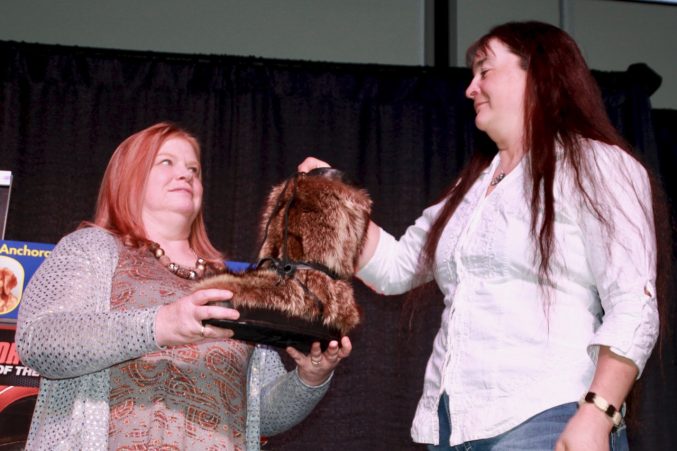 The musher drawing for start order commenced with Matthew Failor reaching into the mukluk to pull a tag with his starting number.  Matthew operates 17th Dog Kennel and by chance, he drew bib number 17!

Veteran musher Anja Radano of Talkeetna will lead the pack down the trail in Bib #2. Cindy Gallea, wearing bib #53 will be the final musher to take the trail.

The race has 17 female mushers and 35 males.  There are 10 rookies in the field – 4 females and 6 males.  Among the contestants, 5 are previous Champions. Joar Leifseth Ulsom is looking to defend his championship.  Mitch Seavey is looking to gain his fourth title.  Martin Buser, Jeff King and Lance Mackey would all like to join Rick Swenson with five wins.  Nine of the 2018 top ten finishers are competing in 2019.

With the exception of Lance Mackey and Mitch, there wasn’t much jovial banter between previous top competitors.  Lance said he wasn’t in the race to win but he did have a good dog team and if he was in the position to win, he’d give it his all.  Mitch Seavey who had to do with out his super speedy leader from his 2017 victory in 2018, assured his fellow competitors that Pilot was back and ready to run.

The Ceremonial Start will begin at 4thand “D” in downtown Anchorage on Saturday morning at 10:00 am.  The route will take the Idita-riders eleven miles out to Campbell Airstrip.  The clock begins for the racers on Sunday in Willow when they take to the trail at 14:00 hours.

Bib numbers are listed under the race center tab at Iditarod.com.  Don’t forget to sign up for Insider and GPS Tracker.

God speed to all of the teams competing in Iditarod XLVII.