Eye on the Trail: Nome on St. Patrick’s Day Part I 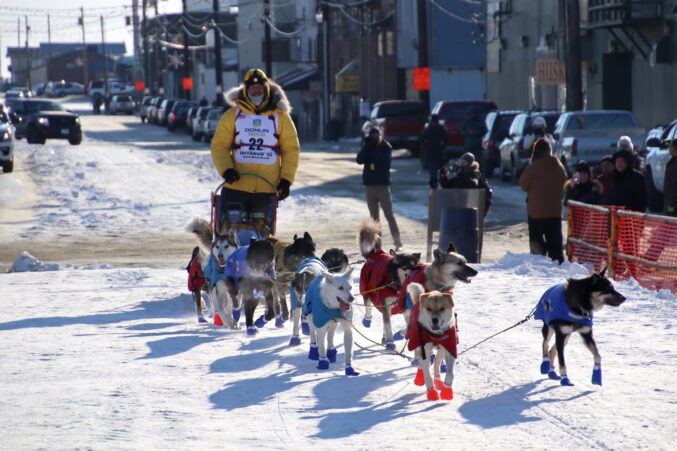 Just like all the people in Nome, I’m watching the tracker and waiting for the first musher to arrive on St. Patrick’s Day.  It’s going to be a close one.  Tracker shows veteran Martin Buser and rookie Joe Taylor running at mile 964.  Now granted with 5,280 feet in a mile they could be nearly a mile apart or they could be running within a few feet of each other.

The stat sheet says Martin checked into Safety at 09:20 then 6 minutes later checked out.  His time en route from White Mountain was 6 hours and 6 minutes.  Joe checked into Safety at 09:33, stayed 3 minutes and checked out at 09:36.  His time from White Mountain to Safety was 5 hours and 48 minutes.  Joe departed Safety 10 minutes after Martin but they are now running neck and neck.  Joe is moving a little faster than Martin, 10.7 mph compared to 9.3 mph.  We’ll see how this plays out – who takes 25th place and who takes 26th place.  Whichever, they’ll arrive in plenty of time to enjoy the traditional St. Patrick’s Day  fare of corned beef and cabbage offered at many of Nome’s fine restaurants for supper.

Back toward White Mountain it’s been interesting to note how the speeds drop drastically at around mile 910. As Matts Pettersson said at the arch, it’s really tough moving through the blow hole.  The Barrington twins echoed Pettersson saying it was the worst they’d ever seen out there.

What exactly is the blow hole?  From an article written by Craig Medrid about the Iditarod Trail Invitational and published in the Anchorage Daily News in March of 2011, I found this explanation.  “Weather forecasters think they arise between cold, high pressure air over Alaska Arctic mainland and warmer, low pressure air above the Bering Sea.  These forecasters admit, it’s their best guess.  Others say it’s the result of the Venturi effect – air moving through the Seward Peninsula Mountains from east to west is forced to accelerate to keep up with air moving over the tops of the mountains.”

As Joe and Martin get closer to Nome, Joe has taken a lead by two miles.  He’s been running up to 11.3 mph while Martin has been moving steadily at 8.3 mph.

Rookie, Joe Taylor takes 25th and earns the coveted belt buckle with a time of 10 days, 21 hours and 10 minutes.  Joe has a history of nurturing and training working dogs.   His family raised guide dogs for the blind.  He says he figured he’d do something working with canines but didn’t have a clue it would be sled dogs.  That is until his microbiology degree landed him a summer job in Fairbanks doing research with sprint musher Arleigh Reynolds.  Mushing Malarky, began with three dogs in 2017 and has grown to the size of a full race team since then.  His huskies are from King, Zirkle, Erhart and Hall bloodlines. 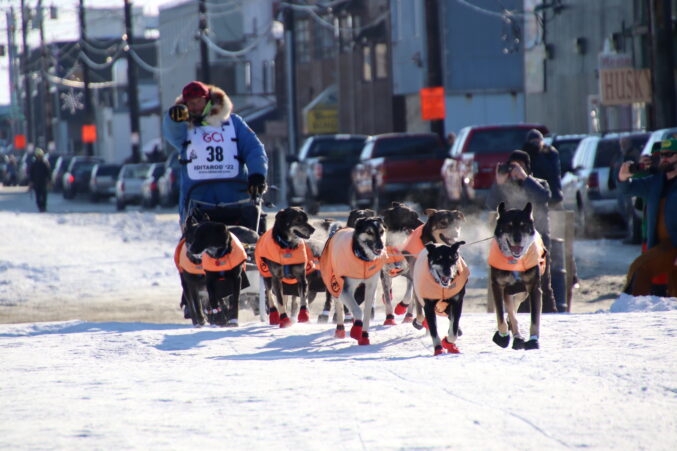 The Master, Martin Buser is now a veteran of 39 Iditarod runs, finishing today in 26th place. He has thirty-seven consecutive finishes since his third race in 1986, including nineteen top 10 finishes with 4 championships.  Martin would say that he is most proud of the five Leonhard Seppala Humanitarian Awards he has received.  In winning the 2002 race, Martin established a record time of 8 days, 22 hours, 46 minutes and 2 seconds that stood for nine years.  In 2011, Alaska Native, John Baker established a new record at 8 days, 18 hours, 46 minutes and 39 seconds.

Martin is the author of Dog Man, Chronicles of an Iditarod Champion.  If you’d like to read a first-hand account of how severe the wind in the blow hole can be, check out the last few pages describing his 2014 race.  BTW, That was the race that Jeff King Left White Mountain with a sizable lead but was blown off the trail and scratched in Safety. 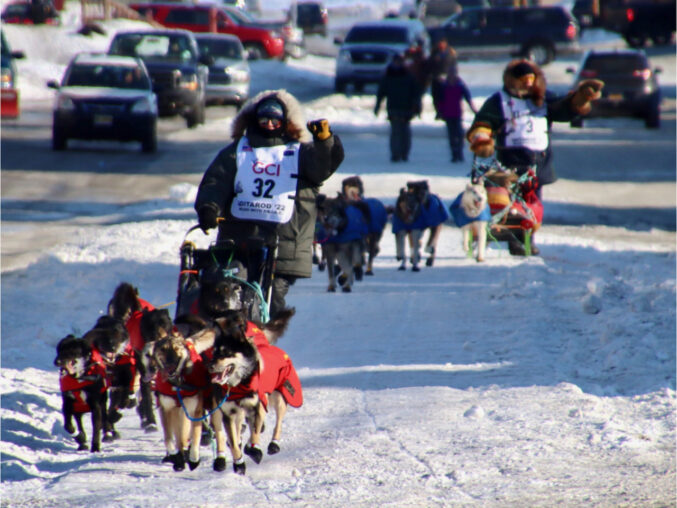 Mentor Jeff King and protégé Amanda Otto have run together since making the Yukon River.  King finds himself unexpected driving Nicolas Petit’s team, when Petit tested positive for COVID shortly before the race.  Petit asked King to take his team to Nome and Jeff agreed.  Amanda has been working at King’s Husky Homestead for two years while completing her qualifiers and learning the tricks of the trade from King, a four time Iditarod Champion.

Rookie Amanda Otto claimed 27th position for a total time of 11 days, 1 hour and 57 minutes with the “A” team from Husky Homestead.  Her time from Safety to Nome was a very admirable 2 hours and 28 minutes.  Her average run speed for the race was 3.62 mph.

King followed Otto to the finish line with a team of Nic Petit dogs that he met only a few days before the race.  He finished his 30th Iditarod in 28th place with a time of 11 days, 1 hour and 58 minutes.  His time from Safety to Nome was  2 hour and 31 minutes and his average speed for the race was 3.62 mph.  BTW, King placed 28th as a rookie in 1981.  During his career he’s placed in the top 10 in twenty races including his four championships.

Not only is King a four time Iditarod Champion but he is an entertaining story teller.  He has shared stories of his adventures as an Iditarod Champion is his book, Cold Hand, Warm Heart.  Other four time winners of the Iditarod include Lance Mackey, Susan Butcher, Doug Swingley and Martin Buser.  Rick Swenson and Dallas Seavey also have four wins but have done one better adding the ever elusive 5th win.