Eye on the Trail: People – Joe and Norma of Skwentna 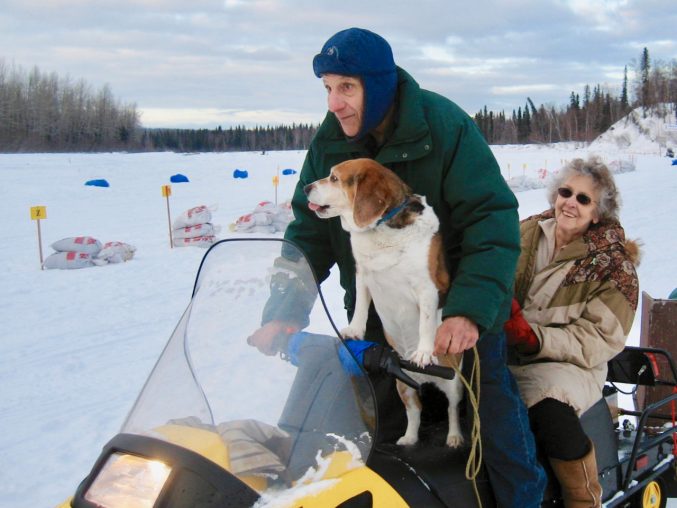 Joe and Norma Delia with Mack

If asked what Iditarod is, you’d say it’s a 1,000-mile sled dog race that goes from Anchorage to Nome.  Nice clean definition but there’s so much more to it than that.  It’s PEOPLE, PLACES and DOGS!  Here’s a story about PEOPLE of the Iditarod.

Iditarod has many legendary figures.  Many have stood on sled runners and coached dog teams from 4th Avenue in Anchorage to Front Street in Nome.  Joe and Norma Delia have never run a dog team in Iditarod but their contributions to the race have been instrumental in the establishment and success of the race and have elevated them to positions of legendary prominence in the Iditarod family.  They are the grass roots people of the race.

Back in 2011, on the eve of Iditarod XXXVIII (38), people gathered in the Outback Cabin situated on a high bank overlooking the Skwentna River to celebrate Joe and Norma Delia’s service, of many kinds, to The last Great Race.  The group included the usual checkpoint volunteers  – Sweeties and River Crew Darlings as well as veterinarians, comms people, race judges and even a few neighbors.

Joe was born and raised in Missouri.  He was a tall lanky kid and played a little high school football there.  With his height, speed and agility he was perfect for the position of wide receiver.  After getting tackled too many times by guys that out weighed him by half, Joe decided there wasn’t any future in football.  He must have felt the same way about Missouri in general.  At the age of 18 he sought a better way of life and headed to Alaska.

In 1948, the hard working and eager to learn Delia secured a job with an old timer, Max Shellabarger, who’d been in the Skwentna/Yentna River area since the early 1920’s.  Joe’s job would be to help run a trap line harvesting beaver, lynx, marten, mink, muskrat, otter and wolf.  Well before the advent of snow machines, Delia’s mode of transportation along the 125-mile trapping trail was dog team and skies.  Once he set eyes on the spot where the Outback Cabin and the Post Office currently stand, he resolved to build a place to live there and make a life for himself in the woods.

Joe has lent many a helping hand in establishing the The Last Great Race on the east side of the Alaska Range.  Joe Redington turned to Delia to open the old mail trail to Rainy Pass.  The teams currently, as they did then, travel portions of Delia’s former trap line.  Delia also volunteered his home as a checkpoint for the race.  The checkpoint has been on the river below the Skwentna Post Office and Joe’s cabin since the first running of the Iditarod.

Joe married his wonderful wife and devoted companion, Norma in 1983 and she too welcomed Iditarod.  As Joe tells the story, he wanted their home to be nice for his bride and that would include plumbing so he built a bathroom.  There would still be an outhouse but Norma would have indoor conveniences.  Joe however refused to use the indoor bathroom.  The outhouse was more to his liking.  That lasted until he became very ill one winter with the flu at which point he decided that he too liked the convenience and comforts of the indoor bathroom.

When Joe Redington was dreaming about racing out to and back from the deserted mining town of Iditarod to preserve the place of the sled dog in Alaskan history, Joe Delia was still running his tap line.  Even though Delia still maintained a team of high-powered incredible voice command sled dogs, in the interest of time and efficiency, he bought a snow machine which he referred to as a Snow Go. 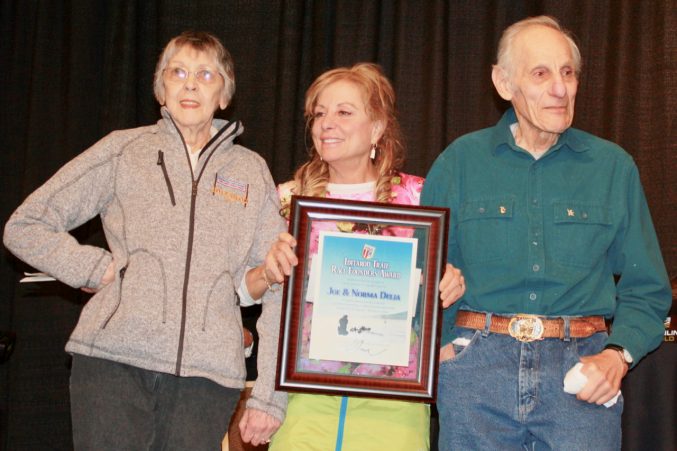 Norma shared the story of how they became involved in Iditarod with Mike Nesper of the Anchorage Daily News.  She told Mike, “Joe was out on his Snow Go and came across a couple of guys on skies.  Come to find out the two fellows were working with Joe Redington SR and Dave Olson on putting in a trail.  Delia liked the idea of a sled dog marathon and agreed to help establish the route from Skwentna to Rainy Pass.”

Opening their home to the Iditarod is so like Joe and Norma.  At first they did it everything assisted by a few locals.  Before the race, Joe broke tail and Norma planned the menu and did the shopping.  During the race Joe was the checker down on the river and up in the cabin Norma did the cooking and serving for volunteers and mushers.  As the couple aged and the demands of the race grew, friends Rob and Cyndy Fritts became chief assistants.  When they knew the future of their checkpoint was in good hands with Fritts and his wife, they turned their labor of love over to younger legs and stronger backs.  The checkpoint crew grew to include the Fritts sons as well as the Sweeties from around Eagle River, Alaska and the River Crew from Tacoma, Washington.  Because Joe and Norma trained an army of dedicated volunteers, Skwentna as it’s been known in the past will continue in the future.

The Anchorage Daily News Iditarod Hall of Fame received its first members in 1997, the same year the Delias retired from running the checkpoint.  No surprise, Joe Delia was among the first ten inductees.  He’s been a part of the race since it began, with the other Joe he’s served as trail engineer, he’s been a trail breaker, he’s been a checker and he’s been a race Judge.

Really though, his greatest gift to the race was just being Joe.  Patient and kind, he made room and time fore everyone.  He was always ready to help and could fix or troubleshoot anything.  Joe was quick to laugh and was a captivating storyteller.  Often Joe entertained others at his own expense in sharing his personal blunders, bloopers and conundrums.  His stories were punctuated by his smile, soft laugh and the ever-present twinkle in his eyes.

Joe and Norma could have written the book on hospitality, theirs was a very special brand.  A person who entered their home as a stranger departed as a friend.  Pilots who had to set down in Skwentna due to bad weather were welcomed and fed by the Delias as were folks traveling the river by boat in the summer or snowmachine in the winter.  Independent journalist, Craig Medred wrote, “The people who’ve warmed themselves against bitter cold or blizzard conditions in Delia’s home over the years number in the hundreds if not the thousands.”

Dee Dee Jonrowe says the Delias were very sharing and caring people.  She told a Juneau Empire reported, “The first time I ran the race I was just a scared rookie from Bethel.  But Joe was very encouraging to me.  He knew nothing about me then but when I walked into their house they made me feel like I was just the person they were waiting to see.” 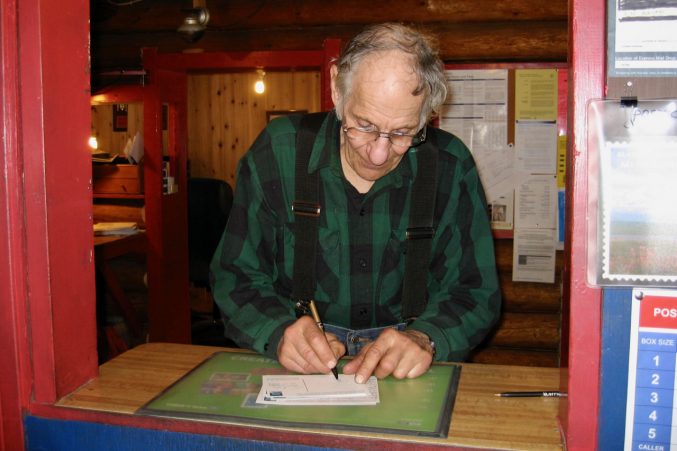 Joe Delia tending to business in the Skwentna Post Office

After living in Skwentna for only a year, Karen Lawson wrote, “My husband and I were the teachers at Skwentna School in 1999-2000, the last year the school was open.  It was our first year in Alaska and we were so excited about our new adventure.  We always looked forward to mail day, Tuesday & Thursday, when we’d make the trip across the river to the post office to get the mail.  Joe was always there with a smile and a story.  He always made us feel welcome and his beagle, Mack, was a playmate for our black lab.  Everyone knew, trusted and loved Joe Delia.  He was Skwentna to many.  Joe and Norma were always kind and helpful and we wish we’d had more time there with them.”

A plaque with the second verse from chapter 13 of Hebrews hung about the door of the Delia’s Skwentna home for many, many years.  It read, “Do not forget to entertain strangers, for by so doing some people have entertained angels without knowing it.”  That verse seems to be the creed that Joe and Norma lived by.  Having both passed away, Norma and Joe are now among those angels.

The Iditarod is a race, a sporting event of great fame.  Each year one champion is crowned and all who participate are winners.  It seems only fitting to recall the people who supported them along the way either directly or indirectly, Joe and Norma Delia are among those people.  Many thanks for giving so much of yourselves to The Last Great Race.