Eye on the Trail:  Place – Skwentna 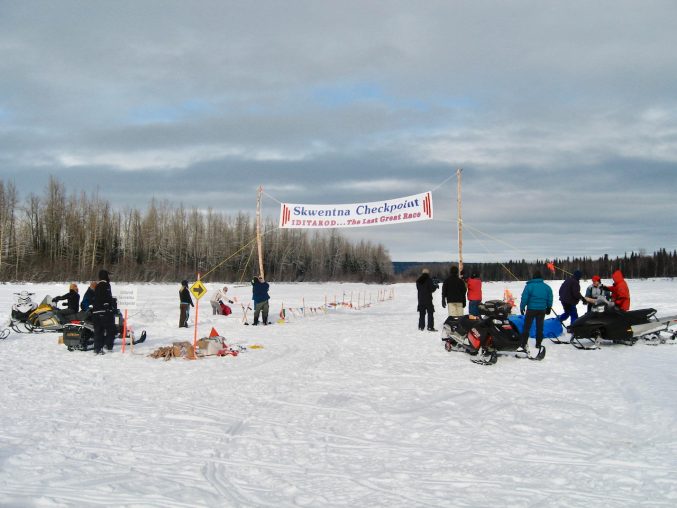 If asked what Iditarod is, you’d say it’s a 1,000-mile sled dog race that goes from Anchorage to Nome.  Nice clean definition but there’s so much more to it than that.  It’s PEOPLE, PLACES and DOGS! Here’s a story about an Iditarod PLACE.

Skwentna at mile 67 of the Gold Trail Loop will be the first checkpoint of 2021.  At one time when nearly 150 residents had mailboxes at the Skwentna Post Office, the community had enough children to have a school.  In 2,000 the population was 111 and now the census-designated place (CDP) is down to less than 40 residents and many are seasonal.  Needless to say, the school is closed but the post office is still active – zip code 99667. 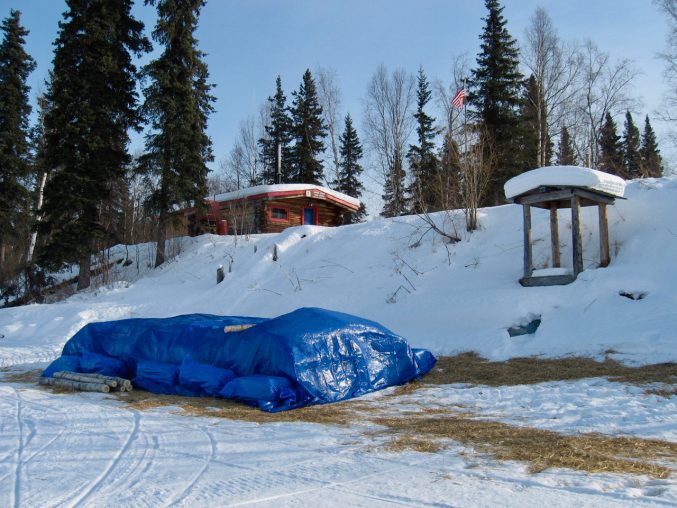 Straw, HEET and Drop Bags on the River Below the Post Office

The Skwentna checkpoint is located at the homestead of Joe Delia, also the location of the post office.  Joe passed away in 2014 at the age of 84 but his spirit lives forever at the Skwentna Checkpoint.  Joe first laid eyes on the spot where his Outback Cabin and the post office now stand back in 1948 while running a trap line in the Skwentna/Yentna River area.  It was just past a bend in the river on a high bank.  Joe deemed it to be the spot where he wanted to live and make a life for himself in the woods.

Joe Delia bumped into Joe Redington out in the woods one day.  From the meeting, Joe Delia helped re-establish the old mail trail from Skwentna on up to Rainy Pass.  He knew it well as the old trail and his trap line were nearly one in the same.  Joe Delia also volunteered to host a checkpoint at his homestead.

The Outback Cabin in Seven Feet of Snow

At first Joe and his wife Norma along with a few neighbors did all the work.  As they aged and the demands of the checkpoint grew, friends Cyndy and Rob Fritts became chief assistants to Joe and Norma.  Officially in 1997, the Delias turned their labor of love over to younger legs and stronger backs.  Cyndy headed up a half-dozen or more folks known as the Skwentna Sweeties who prepared food for the army of volunteers and the mushers.  Rob was joined by his two sons, Keegan and Zach along with a dozen or more folks from Tacoma, Washington to see to things down on the river where teams were checked in and parked.  Rob became the checker when Joe retired and Keegan has now taken over for Rob.

Joe and Norma as well as Rob and Cyndy have passed on.  Procedures established by them for assembling, running and dismantling the checkpoint have been fined tuned for 48 years.  It’s precision at its finest and it has to be as the whole field of mushers arrives in and passes through Skwentna in less than twelve hours on the first night of the race.  In recent years as the crew, including the Sweeties, River Team, vets, comms people and race judges arrived the total number of Skwentna volunteers ranged between forty and fifty.  It really takes a small army to run the checkpoint. 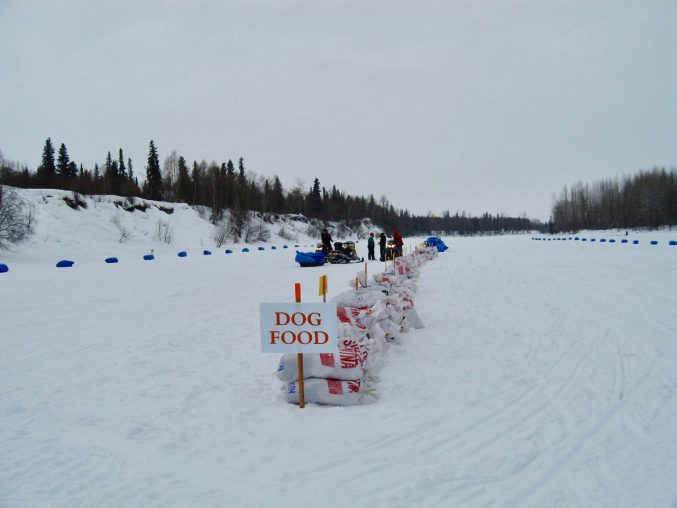 Drop bags need to be sorted and arranged in alphabetical order so the mushers can quickly and easily access them.  The big SKWENTNA banner is erected.  Bales of straw are placed along the river to mark parking places. A large commercial propane stove is set up to heat water and a hole is cut nearby in the ice for water.  Boxes of heat are stacked at the end of the food line – quite handy for Aliy Zirkle.  Extra bales of straw for teams wishing to camp outside the checkpoint are between the HEET and the hot water.  That’s for the first night of the race!  Then a week later, it’ll be time for round two!

Skwentna will hit snooze for a week then teams return, a completely new concept for not only Skwentna but also every checkpoint between Deshka Landing and Iditarod.  Skwentna is the White Mountain of 2021 where teams will take the final required 8-hour rest before dashing to Deshka.  Before teams arrive, the River Crew will go to work relocating the banner and alphabetizing previously delivered drop bags marked SKW-SOUTH.  The pace of the checkpoint point will be less frantic the second time around as the teams will be on snooze for 8 hours. 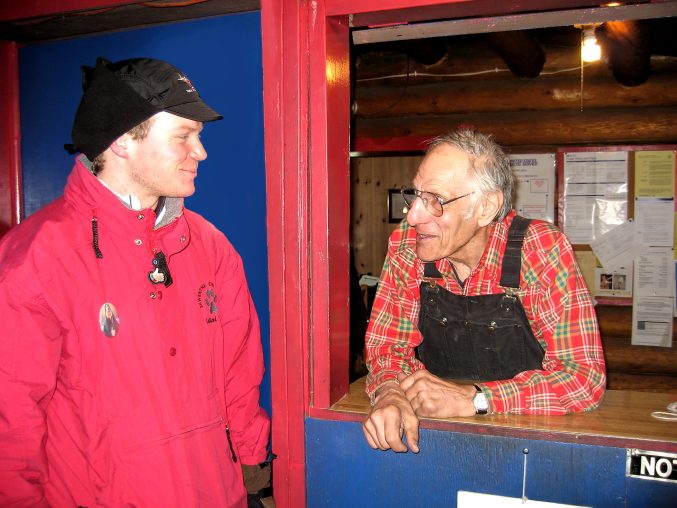 Keegan Fritts Talks with Joe Delia in the Post Office

Skwentna checker, Keegan Fritts has been in Skwentna for the race ever since he was a little tyke.  Fritts is very excited to host not only the first checkpoint of 2021 but also the White Mountain of 2021.  He says he’s always wanted to see the start or the finish but realizes there’s nothing quite like being on the ground with the teams at the first checkpoint and now the final checkpoint.

Skwentna will look very similar to the old days.  There will be wall tents down on the river for the mushers to use and many will actually sleep in their sled bags or on the straw with their dogs.  It will be an old style checkpoint and race in that respect.  One thing that’s never changed at Skwentna over the past 49 years is the hospitality.

Joe and Norma had a sign above their door that displayed a bible verse they lived by – “Be not forgetful to entertain strangers, for thereby some have entertained angels unawares,” Hebrews 13:2.  Thinking of continuing that legacy Keegan said, “I believe that Joe and Norma would be jumping for joy at the thought of providing their ‘Skwentna Hospitality’ twice in one race.  I can hear the excitement that would be echoed by my parents, Rob & Cyndy.”  Skwentna is an incredible place!