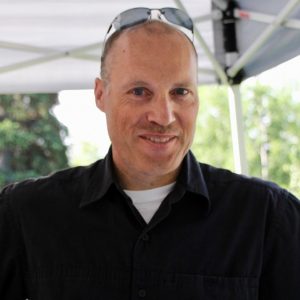 The first guy through the line for sign-up this summer was Roger Lee.   He grew up in England but now resides in the United States. He’s currently on sabbatical from the Air Force. For the 2017 race, he’ll be running a team of Scott Janssen dogs. Lt Col Snow Dog says his favorite race is the Copper Basin 300. We’ll see if that changes after he completes his first Iditarod.

If there’s a rookie on the trail this year that should be well prepared for the frigid temperatures of the relocated northern route, It’s Lt. Col. Snow Dog. As a British Army Air Corps soldier, Roger was called to travel and adventure. He spent winters traveling in Europe competing with his unit’s ski racing teams, training in Arctic Warfare survival skills and leading ski trips for the Ski Club of Great Britain.

Roger has found his way to the Iditarod Trail by ski-joring with a husky a few years back. Lee served with the Air National Guard in the Alaska 210th Search and Rescue unit. Hi Iditarod dream was born after meeting DeeDee Jonrowe during a dog care presentation at an Anchorage Skijor Club Meeting.

When Roger first met Scott Janssen, they immediately found a common interest in sled dogs. The two also share an interest in rock music and the Beatles. Lee has followed heavy metal groups, enjoying more than 160 AC/DC shows in 16 countries.

Roger is thrilled to be joining Team Janssen – Anna & Kristi Berington and Gunnar Johnson. Johnson, a finisher in 1991, is replacing Scott for the 2017 race.