Eye on the Trail: Rounding out the top 20 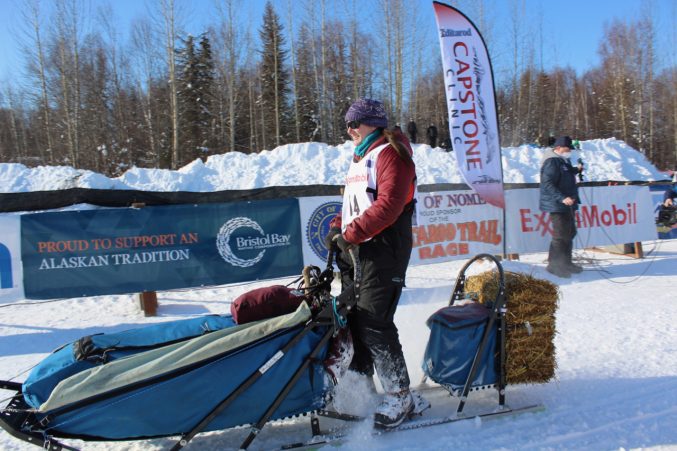 Ryne Olson has taken a giant leap from a previous best finish of 31st to making the un-burled arch in 18th place on Tuesday.  Ryne is 3 for 3 with Iditarod finishes. She moved to Alaska from Durango, Colorado to pursue dog mushing with Aliy Zirkle and Allen Moore at SP Kennels.  During her rookie run in 2012, Olson ran a team from SP Kennel.  That experience was all it took for Ryne to embrace and pursue a career in long distance dog mushing.  She says she’s always loved dogs and the outdoors and is happy that she found the sport of mushing to combine the two things she loves in life.  Olson established Ryno Kennel and has raised most of the canine athletes from puppyhood.  She finds immense joy in nurturing, training and racing canines.  Ryne was excited to race in 2021 to test herself against Mother Nature and some of the top dog teams in the world.  Indeed Mother Nature tested not only Ryne but also every musher on the trail with frigid temperatures, a snowless Burn, a beastly fast Dalzell Gorge and a pandemic.  Ryne has finished the Yukon Quest, the Quest 300 and the Copper Basin 300 multiple times. 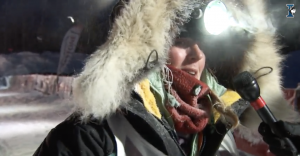 Paige Drobny talks about Her Favorite Parts of the Trail 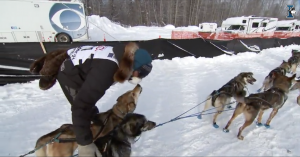 Cody Strathe Praises His Dogs for a Job Well Done

Filing to the finish line in 19th and 20th place was the couple from Squid Acres, Paige Drobny and Cody Strathe.  They will be the first to tell you that when they first acquired sled dogs, racing was the farthest thing from their minds.  They simply wanted to see Alaska and enjoy doing that with awesome canine athletes.  But then one day they decided to run a little 200-mile race and after that racing became their way of life.  Cody and Paige have the distinction of being the first married couple to complete both the Iditarod and the Yukon Quest in the same year, 2016.They came to the Iditarod finish line in 42nd and 43rd place.

Ryne and Paige were booting and getting ready to hit the trail at the same time so the two friends decided to travel together.  When asked about her favorite part of the 2021 run, Paige said she normally doesn’t like the Burn but coming through in the day light she got to see what it was and the same was true for the Buffalo tunnels and there was new snow in both areas on the return run. Ryne thought it was especially fun seeing buffalo out beyond Rohn and having somebody to share that with.

Paige completed her rookie Iditarod run in 2013 earning 34th place and the coveted finisher’s belt buckle.  Her personal Iditarod best has been 7th place in the 2019 and 2020 runs to Nome.  Paige has raced the 1,000-mile Yukon Quest as well as the 300-mile Copper Basin, earning the vet’s choice award in both of the events.  Paige has a degree in Biology from Virginia Tech.  She completed her master’s degree in UAF studying squid, thus the name of their kennel.

Cody completed his rookie Iditarod in 2016 finishing in 42nd place, just ahead of Paige.  His personal best Iditarod run came in 2018 when he finished 29th.  Like Paige, Cody has raced in multiple 1,000-mile Quest runs but he didn’t become interested in doing Iditarod until experiencing his first Yukon Quest.  He’s completed 4 out of 4 Iditarod runs.  Strathe has completed the Copper Basin 300 multiple times.  Cody says, “I am an explorer at heart.  Being out in the wild areas of Alaska is what makes me happiest.”  He designs and builds custom dog sleds under the name DogPaddle Designs.  He also makes handcrafted paddles and wooden boats.  Strathe earned a degree from the UW – Stevens Point in Natural Resource Management then pursued a Master’s in Anthropology from UAF.