Eye on the Trail: Runner Up Dallas Seavey 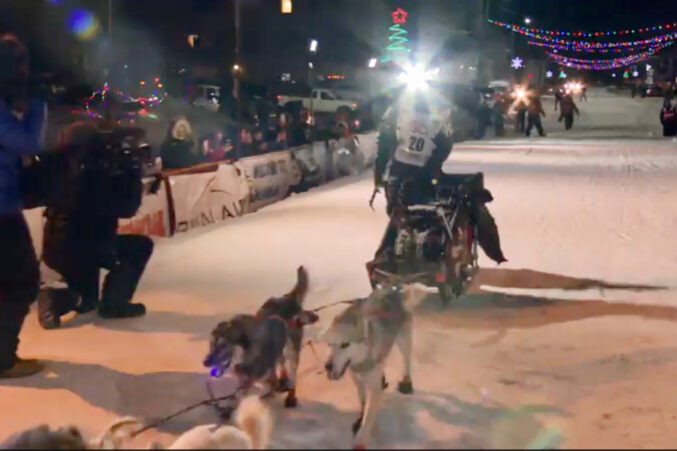 Dallas Seavey on Front Street as Runner Up (Photo by Insider)

In a race frosted with all sorts of challenges, Dallas Seavey has claimed the title of runner up.  Dallas followed Champion Brent Sass to the burled arch in Nome by 1 hour and 8 minutes.  He was greeted by cheering fans and by his daughter who was happy to see her father.

Seavey walked forward to his single leader, Profit.  Dallas said, “Profit is one of Reef’s boys, and probably just as good.”  Reef was been a leader for Dallas in more than one of his Iditarod Championships. 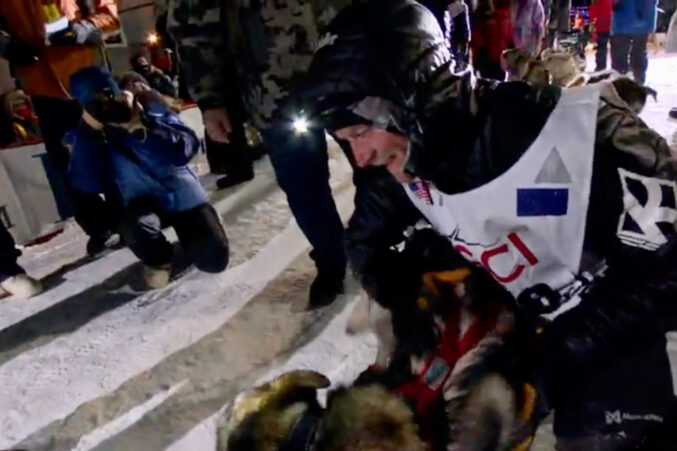 Dallas With Leader Profit, Son of Reef (Photo by Insider)

Seavey’s average speed for the race was 4.64 mph, .02 slower than Sass.  Thomas Waerner, the 2020 Champion has referred often to the .02 mph that separates the champion of a race from the runner up.  That’s exactly how close this race was.

At times Brent’s lead would grow to 20 miles and about 2.5 hours but Dallas was always right there, closing the gap.  On the run in from White Mountain, the gap was down to 10 miles.  Both teams encountered wind in the blow hole and ground blizzards between White Mountain and Safety.

Compare the time from Safety to Nome – Sass covered the 22 miles in 2 hours and 50 minutes and Dallas made it in 2 hours and 33 minutes.  Both of these guys are incredibly driven and athletic.  They would run from Anchorage to Nome to be successful.  The tables reversed from the 2021 Iditarod where Dallas was speedier and Brent, though he tried, simply couldn’t catch him.

In the early parts of the race, Seavey’s team was a bit finicky about food.  It might have been a bug or just the warm weather.  At the half-way point of Cripple, that changed.  One of his dogs tried to snatch a bootie from his hand, thinking it was food.  It was like day and night, their appetites switched back on at about the same time the temperature started to cool down.  When he arrived in Ruby, Dallas declared that these guys are eating like monsters.

Cripple was the last time Brent and Dallas saw each other until they were both resting in White Mountain.  Sass Arrived at 11:05, Dallas followed at 13:42.  Sass departed White Mountain at 02:48, Seavey departed at 04:13.  Seavey narrowed the gap between the two over the 77 miles to 1 hour and 6 minutes at the finish line.  These two guys really entertained race fans!

Dallas is the youngest musher in history to run the race  and one of a very few, if not the only person, to run the Jr. Iditarod and the Iditarod in the same year.  His birthday falls right at the beginning of March so he was 17 for his final Jr. Iditarod then during the week turned 18 and became eligible to run the Iditarod as a rookie where he finished in 51st place.  He holds the honor of being the youngest Iditarod champion, winning in 2012 at the age of 25.

Seavey is one of the elite group of long distance mushers to have won both the Yukon Quest 1,000 mile race and the 1,000 mile Iditarod.  Joining Dallas in this great accomplishment are Lance Mackey, Jeff King, Joe Runyan, Rick Mackey and now add Brent Sass.

Seavey has completed the Iditarod thirteen times and has eleven top ten finishes including five Championships.  He and Rick Swenson are the only Iditarod Champions to hold five crowns.