Eye on the Trail: Cooke and Debakk Converge on Nome

If you asked 100 people what a sled dog looks like they’d probably describe or draw the Siberian Husky.  That’s what’s been portrayed through the Serum Run and movies like Snow Dogs or Eight Below.  Siberians are handsome animals with character plus.  I’ve asked Mike Ellis, Hank DeBruin and Karen Ramstead who run all Siberian teams why they’ve chosen the Sibes over the Alaskans and their answer usually revolves around the beauty of the animal and the animal’s character. Perhaps Cooke and Debakk would echo their responses and add additional reasons when asked the same question.  When the Sibes come into a checkpoint on the trail, the locals know it and come to see the magnificent animals.

Rob started running Sibes in 1992 and participated in Dry Land Sprint Racing in his home land, the United Kingdom.  Rob decided to relocate in North America and resettled with nine Siberians.  Today he has 44 Siberians supervised by one cat in his kennel in Whitehorse, YT.  Rob is a veteran of the Yukon Quest in 2013 and 2015.  By completing the Iditarod with his Siberians, he may be the first Siberian team to complete both 1,000 miles races in the same season.  Rob earned 50th place with a run time of 12 days 4 hours and 23 minutes.  He made the final 22 miles in 2 hours and 50 minutes. 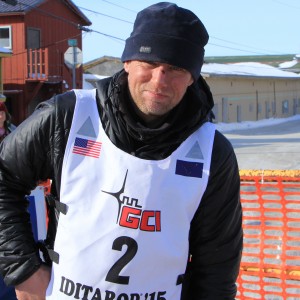 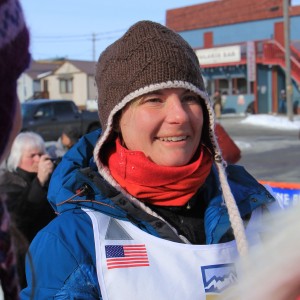 Yvonne Debakk lives in Norway but is currently in Fairbanks for two years doing post doctoral research.  Yvonne has always been fascinated by the Arctic and dog mushing.  While studying Northern Lights Physics in Svalbard, she was introduced to the sport and became hooked.  She loves to be out with the dogs and probably has ample opportunity to witness stunning displays of the Northern Lights.  The dogs Yvonne has raced in the 2014 and 2015 Iditarod are all NKC Registered Siberian Huskies she brought to Alaska from Norway.  Yvonne said that after the first couple of days of the race, it was apparent that they wouldn’t be racing.  She decided to enjoy the journey as that’s the beauty of a 1,000 mile race.  Yvonne’s favorite part of the journey was the coast.  Debakk claimed 55th place with a time of 12 days 5 hours and 55 minutes.  Her time from Safety to Nome was 3 hours and 27 minutes.  About that segment of the run she said, it was fairly warm for these dogs so we took our time.