Eye on the Trail: Stewart in 50th

The good news for Jason Stewart, Anja Radano and Magnus Kaltenborn was wind direction. Rather than facing into the wind and wind blown snow for the miles to Nome from White Mountain, some of the time the wind was blowing from behind. It was a welcome relief after experiencing blizzards, whiteouts and the blowhole since leaving Willow two-weeks ago Sunday. The trio departed White Mountain in the wee hours of this morning. They traveled like a little train, an engine, breaking trail and a caboose bringing up the rear with a single car between. Watching the tracker, they exchanged positions as they progressed toward Nome. 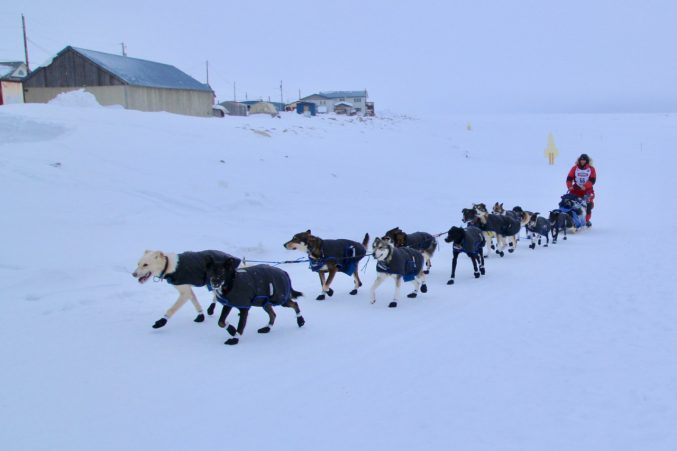 When the siren sounded announcing that a team was two-miles from the Burled Arch, it was announcing Jason Stewart. Jason is married to Melissa Owens, formerly of Nome. As you might imagine, the Owens family was at the Burled Arch to greet their mushing son-in-law. A surprise was in store for Jason. His wife, Melissa, was acting as the checker. The newest member of Team Stewart, seven-month-old Ellen Patricia, was also there to greet daddy. 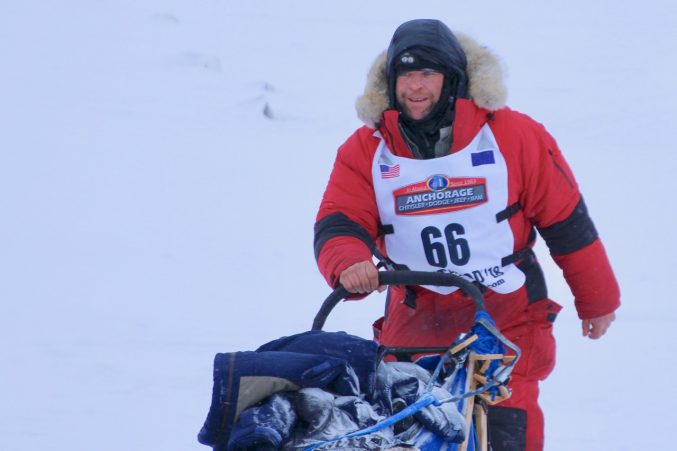 Stewart grew up near Washington, DC but would visit his father in Alaska every summer. When it came time to go back east for the school year, Jason said he was always homesick for the wide-open spaces and beauty of the Last Frontier. Finally Stewart pulled up his east coast stakes and moved to Alaska. He began running dogs and enjoyed winter camping trips. He already had the sled dog bug before meeting Owens. He began racing in 2015 with an eye on Iditarod. 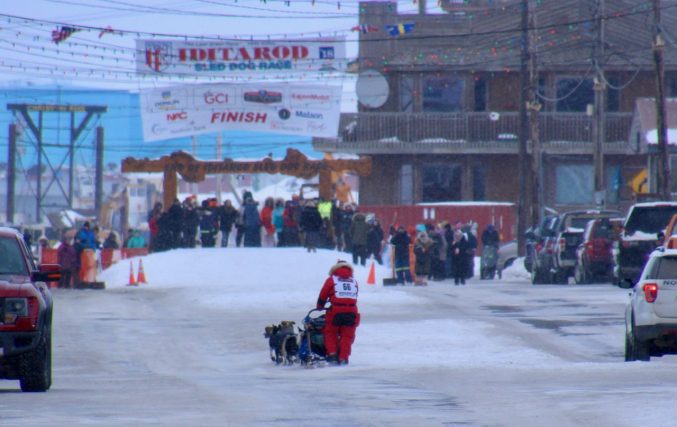 Every musher who’s come to the Burled Arch in Nome has been happy and some have even been speechless. Jason expressed his joy and appreciation for what he just experienced by saying, “I waited forty-three years for this, it was well worth the wait. Sure it was tough, it had its moments but I wouldn’t have wanted it any other way. It just doesn’t get any better. I’ve just finished my rookie Iditarod. Being with my dogs in the most beautiful place on earth under challenging conditions is a real privilege. I’m so happy and so grateful for this experience.”

Stewart goes into the Iditarod record books finishing in 50th place with a time of 12 days, 19 hours and 53 minutes. Jason will wear the prized Iditarod finisher’s belt buckle with pride as he long remembers his best Iditarod ever, his rookie run. Congratulations!