Eye on the Trail: Symposium Open House at Nature’s Kennel

It’s a pleasure to visit Nature’s Kennel to see the tour dogs, the race team dogs and the PUPPIES. The Sunday morning open house is the final activity of the Midwest Musher Symposium and Iditarod Teacher’s Conference. Ed and Tasha Stielstra along with their staff run a first class sled dog kennel. 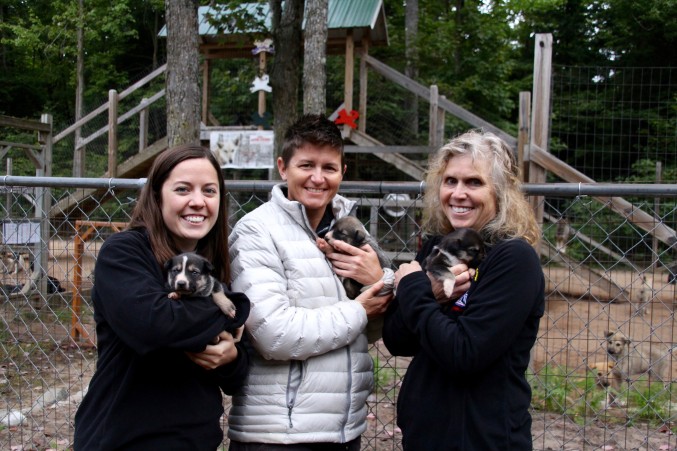 Teachers on the Trail, Annie Kelley 2017, Erin Montgomery 2014, and Linda Fenton 2013 hold puppies from the Neese Litter. See the puppy bridge in the background.

Ask any of the symposium/conference participants who visited the kennel today and their favorite experience was with the puppies. The young sled dogs ranged from 4 weeks to 4 months. The older the puppies, the more play and agility structures were in their particular pen. Making the area even more interesting are the raised garden beds that are strategically place between the various pens. There are passageways between pens to promote socialization. Some of the passages are tunnels created from black plastic culvert pipe and gates. The overhead bridge keeps the older puppies busy. Really, it’s a puppy paradise.

Ed Stielstra was introducing his Yukon Quest super dogs to Charley Benja and the Berington Twins. Ed is a musher who knows his dogs very well. He was sharing their physical attributes, stories about their mental toughness and comments about each dog’s personality. Ed has signed up to run his rookie Yukon Quest in 2017. 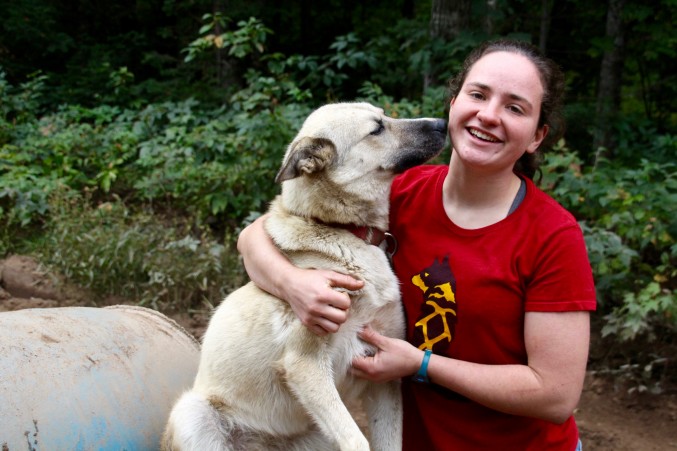 Laura Neese with her go to leader, Maple.

Laura Neese will also be running a Nature’s Kennel Quest team. Laura returns to Quest this year as a veteran after her 2016 race. The press referred to her in 2016 as the Quest rookie sensation. It was her first 1,000 mile race and she was impressive. Not only was her dog care top-notch but add to that her sled driving abilities, camping skills and enthusiastic attitude. Laura was upbeat for the entire race and as the going got tough, Laura embraced the challenge and smiled the whole route, even the tough miles.

Laura will compete in the Quest with the kennel’s “B” team while Ed will take the “A” team on the trail running from Whitehorse to Fairbanks in the early part of February. When the first Sunday of March rolls around, Laura will have the kennel “A” team and either Ed Stielstra or Dr. Tim Hunt will be running the “B” dogs. Laura has her eye on Iditarod Rookie of the Year honors and Ed mentioned the same for Yukon Quest.

Laura will always have a special spot in her heart for the Yukon Quest as it was her first 1,000 mile race but she’s anxious to experience the Iditarod Trail and the challenges it offers. There are fewer checkpoints in the Quest and mushers really feel the solitude of the trail with longer distances between checkpoints. Laura loves the solitude of the Quest and welcomes the alone time spent with her dogs. She’s looking forward to the challenge of running the Iditarod and some of the infamous sections of the trail – Dalzell Gorge, Buffalo Tunnels, Farewell Burn and the coast from Unalakleet to Nome.

Neese took a short break from the puppy pens this morning to introduce her leaders. Maple is her go to dog but several other dogs on her team have the skill to run lead. When asked about up coming yearlings, Laura pointed to the “Mash” litter. They feel that Radar, Sherman, B.J. and Hawkeye might be the best litter of puppies ever born in the kennel.   Radar will be training with Trent Herbst and running Iditarod with a very talented group of Nature’s Kennel yearlings. 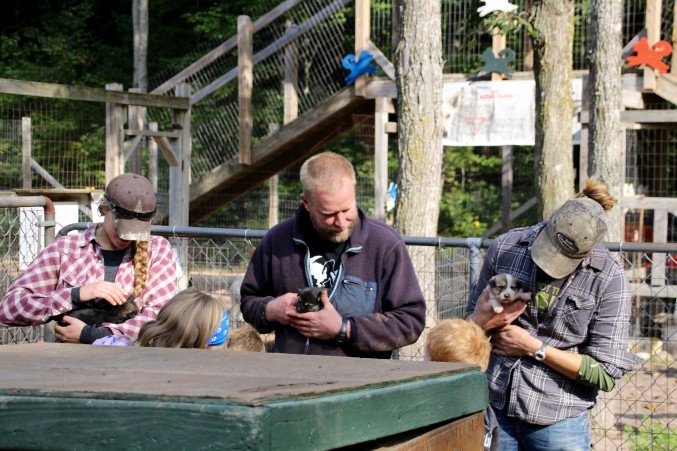 It’s always fun to note the themes that are chosen for naming litters of puppies. One was polar bears, another was for the clinic staff that helped deliver a litter by C-section and there was the Neese Family litter. The 4-week old puppies that were getting extravagant amounts of attention were named for Laura and her immediate family members.

Best wishes to Ed Stielstra, Laura Neese, Dr. Tim and Trent Herbst as they prepare for and run the Yukon Quest and Iditarod.