Eye on the Trail: Teams March to Nome on Wednesday Morning 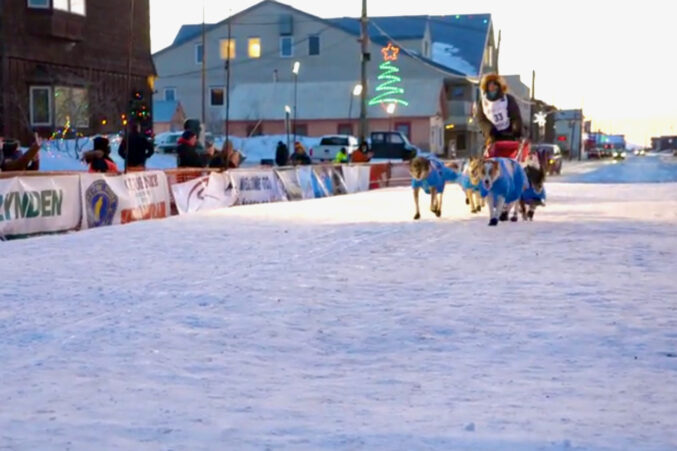 Shortly after midnight of March 16, Ryan Redington claimed the 9th position in the 50th Iditarod.  Ryan arrived in Nome at 00:26.  His 9th place finish makes three consecutive top 10’s for Ryan.  He has completed his eighth race out of sixteen attempts.  His average race speed was 4.28 mph with a total elapsed time of 9 days, 9 hours and 26 minutes.  His last run on the northern route in 2020 was completed in 9 days, 20 hours and 40 minutes.  Ryan is the grandson of race founder, Joe Redington, Sr.  His grandfather, father and Uncle Joee have all been inducted into the Mushing Hall of Fame.  Ryan has claimed gold in the John Beargrease Sled Dog Marathon Run from Duluth to Grand Portage, Minnesota.

There was only time for a quick nap before Aaron Peck arrived at 03:10 in 10th place.  Peck rounds out the top ten for Iditarod 2022, claiming his first top 10 position in his Iditarod career.  Peck from Alberta, Canada placed 14th in the 2021 Gold Trial Loop standings and was hoping to improve in this race.  Mission accomplished! Peck averaged 4.22 mph and finished in 9 days, 12 hours and 10 minutes.  His previous best time on the northern route was 11 days, 14 hours and 42 minutes.  Peck has now completed seven Iditarod runs and is a Herbie Nayokpuk Award recipient.

There was time for spectators and race personnel to take a longer nap before heading back to the burled arch at 07:48 to welcome Joar Leifseth Ulsom in 11th position.  Joar completed the run in 9 days 16 hours and 48 minutes with an average speed of 4.22 mph.  The 2018 Champion has now finished 10 Iditarod runs, this being his first time out of the top 10.  As Rookie of the Year in 2013, Joar crossed the finish line in 7th place.  Joar’s best time on the northern route came back in 2014 with 8 days, 19 hours and 1 minute.  Back in Koyuk, Joar expressed that he was looking forward to making Nome to see his wife and infant son, Henrik.  Joar’s time from Safety to Nome was 2 hour and 26 minutes which might earn him the Nome Kennel Club Award for fastest time Safety to Nome of the top 20 mushers.

Travis Beals arrived in 12th position with an elapsed time of 9 days, 17 hours and 30 minutes.  Travis is now a nine time finisher and holds three top ten runs.  His best northern route time is 9 days 6 hours and 42 minutes. Travis and his partner Sarah Stokey operate Turning Heads Kennel and Tours in Seward.  Sarah is also an Iditarod veteran.  They both ran the race in 2019.  After finishing in 37th place for his first two Iditarod runs, Travis followed with an 11th place finish and earned most improved musher honors in 2015.  Travis talks about how the musher needs to help the dogs, how the musher needs to get off the sled and run up the hills or pole and pedal while on the runners.  Mushing isn’t a sit down sport according to Travis.

Ramey Smyth from Willow is the 13th team to park under the burled arch in Iditarod 2022.  Smyth is the second of five mushers to come in in less than forty-two minutes.  There was likely more than one team in the chute during that busy time.  Smyth has finished Iditarod twenty-six times with twelve top 10 finishes.  Compared to today’s northern route time of 9 days, 17 hours and 50 minutes, Smyth turned in a northern time of 9 days, 6 hours and 4 minutes back in 2012.  Smyth’s wife Becca Moore is a Yukon Quest and Iditarod veteran.  Ramey is a two-time Jr. Iditarod Champion.  His parents and his brother are also Iditarod veterans.  His time today from Safety to Nome was 2 hours 32 minutes.  In his career he’s won the award presented by the Nome Kennel club eight different years.  Not this year though. 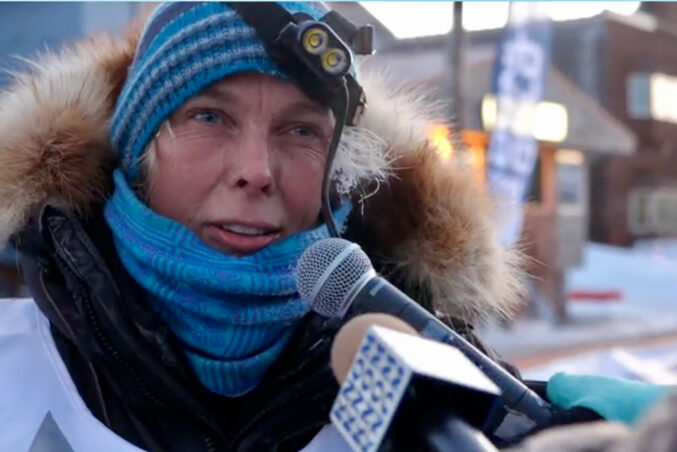 Six minutes after Smyth, Mille Porsild brought her team into the finish chute claiming 14th place.  Mille is the highest placing female finisher for the 2022 race.  She completed the race in 9 days, 17 hours and 56 minutes with an average speed of 4.12 mph.   She claimed 5th place on the Gold Trail Loop in 2021 and 15th as a rookie on the northern route in 2020.  She was 2020 Rookie of the Year and was honored with the Humanitarian award in 2021.  At the finish line, Mille called her race – wrong place at the wrong time over the entire way.  She quickly followed that saying, “It’s such a privilege to travel this trail.  It’s such an amazing race, such an incredible experience to see this country.  What I really loved about this race is that it kicked our butts in that nature showed us that nature is in charge.  That’s actually what I like about dog mushing.  You are very much alive in the moment and you know how small you are.”  That’s really significant coming from a woman who has spent more than 1,000 nights in a tent during mushing expeditions across Greenland, Russia, Sweden, Norway, Finland, Alaska and Canada!

Matt Hall has finished his 4th Iditarod taking 15th place.  Hall has finished in the top 20 three of 4 races with one in the top 10.   The former Yukon Quest champion undoubtedly aspires to someday join the elite group of men who have won both of the 1,000 mile challenges – Lance Mackey, Rick Mackey, Joe Runyon, Jeff King, Dallas Seavey and Brent Sass.  For 2022, Matt averaged 4.11 mph over an elapsed  time of 9 days, 18 hours and 21 minutes.  Matt completed the northern route in 2018 with a time of 10 days, 3 hours and 36 minutes for 11th place.  Hall grew up in Eagle, Alaska and began mushing at the age of two.  He worked his own trap line with dogs and guided week long mushing expeditions for his parents company, Bush Alaska Expeditions.  At the age of 16, he relocated to Two Rivers to pursue his dream of mushing.  He ran his first Yukon Quest at the age of 22 and won the Quest when he was 26.

Mitch Seavey was the final morning musher to reach the finish in Nome.  The elder Seavey earned 16th place with a time of 9 days, 19 hours and 19 minutes and an average speed of 4.10 mph.  Running the Iditarod is a Seavey family tradition that began with Mitch’s father, Dan who ran the first race in 1973.  After that, Mitch set his sights on also running the Iditarod as a second generation.  Now with Dallas and his brothers Tyrell and Danny, it’s a three generation affair.  Mitch is a three time Iditarod champion.  He has also won the All Alaska Sweepstakes held in 2008 to commemorate the original All Alaska Sweepstakes made famous by Leonhard Seppala and Scotty Allen.  Seavey has completed 27 of 28 runs to Nome with 17 finishes in the top 10.