Eye on the Trail: Telephoto Story – Buser and King Honored

Iditarod icons Martin Buser and Jeff King have been honored as inductees of the Alaska Sports Hall of Fame. The ceremony took place on April 27th at the Anchorage Museum of History and Art. Iditarod fans know these two guys are among the handful of people who have claimed Iditarod Gold four times. That, in and of itself is a “MAJOR” achievement but there’s much more to their stories than the number of Joe Redington trophies they’ve acquired.

Looking at the Iditarod archives again tells only part of the story, but it’s an impressive part of the story. To save you the time of going to the archives, here’s a summary of their Iditarod mushing accomplishments and a few stories to boot. 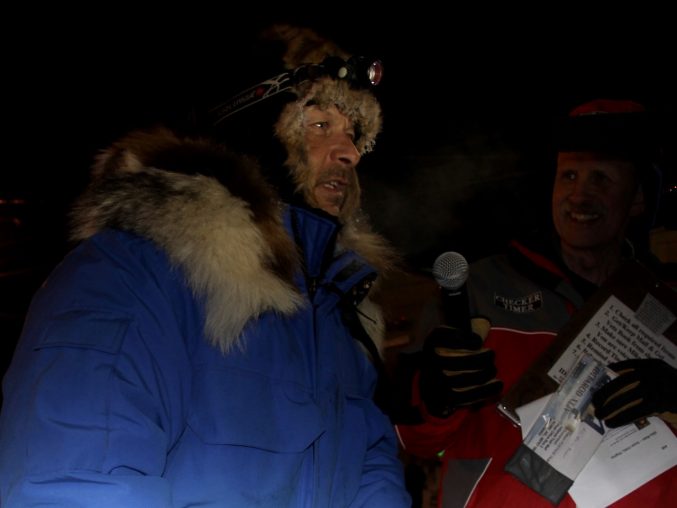 Swiss born Buser ran his first Iditarod in 1980 and his second the following year. In his rookie run he placed placed 22nd and improved to 19th the next year. He took a four-year break. Martin has run them all since returning in 1986. Most amazing is his string of Iditarod starts and finishes. He’s 34 for 34!!! Some of those finishes have required great perseverance. There was the year he amputated part of finger a few days before the race started. He dislocated his little finger one year prior to the race which sounds minor but turned out to be major. He sprained his ankle on the snowless trail of 2014. Martin spent many weeks prior to the 2016 race in Seattle helping his son Nikolai mend and rehabilitation after a serious car accident then returned to Alaska to run the Iditarod only to come down with pneumonia. The remarkable string of 34 for 34 isn’t because he’s indestructible, it’s because he adapts and finds a way to keep on going.

Buser broke into Iditarod’s top ten in 1987, his fourth race. For the next fourteen years he remained in the top ten claiming the great Redington award in 1992, 1994, and 1997. He returned to the podium in 2002 for his 4th victory. Altogether he’s had 19 top ten finishes.

Looking at Buser’s Iditarod awards, the list goes on and on. He’s been honored with five Leonard Seppala Humanitarian awards and has received the most Inspirational Musher award or the Sportsmanship award for three races. In 2002, Martin became the first musher to finish the race in eight days. He held the record of 8 days, 22 hours, 46 minutes and 2 seconds until John Baker bested him in 2012 by 4 hours. 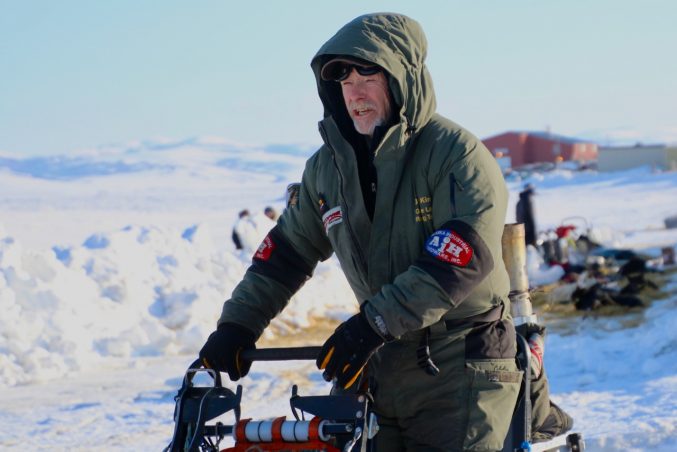 California born Jeff King ran his first Iditarod in 1981 followed by his second in 1991. All together Jeff has run Iditarod twenty-seven times and has finished 25 times. King claimed Iditarod gold in 1993, 1996, 1998 and 2006. Of his twenty-five finishes, twenty have been in the top-ten. If you’re into rounding up or down, it’s worth noting that four of his “other” finishes were in eleventh or twelfth place. Doing the math, he’s only finished out of the top dozen once and that was in his rookie year when he arrived in Nome in 28th position. King has been honored with the Leonard Seppala Humanitarian award twice during his Iditarod career.

From his rookie year, King improved by 16 places in 1991 then claimed sixth in ‘92’ and took top honors in his fourth race. He had thirteen consecutive top-ten finishes between 1992 and 2004. A twelfth place finish in 2005 preceded his 4th Redington trophy in 2006. Since then, Jeff has been pushing to claim his fifth victory which avid Iditarod fans expected to occur in 2014. He left White Mountain with what seemed like an in surmountable lead but then Mother Nature stepped in to create one of the most bizarre Iditarod finishes of all time. Howling winds blew King and his team off course. Aliy Zirkle, also in the midst of the storm caught and passed King but didn’t know it. She then took refuge from the storm at the Safety Roadhouse. Dallas Seavey was gaining trail as King and Zirkle sat still. Remember going to bed that night thinking that Jeff had tied Swenson’s five win record and waking up in the morning to learn that King had scratched and Seavey had claimed victory over Aliy by 2 minutes and 22 seconds? 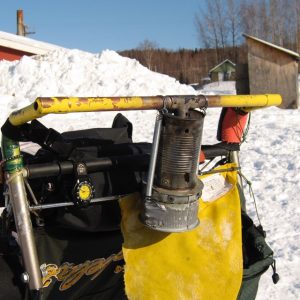 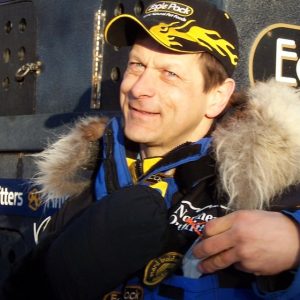 Martin protecting his hand in 2005

The 2017 Alaska Sports Hall of fame inductees have brought much to the sport of mushing as well as the Last Great Race™. They are excellent dog guys, so excellent they think like their canine athletes. Buser and King are competitors to the core. They are superb strategists. They are innovators in dog science. The have pioneered some very unique mushing equipment and sled designs. They are masters of the sport and willing mentors. They are ambassadors of the sport as well as Iditarod. This list could go on and on… In closing, here are a couple of stories.

Martin was speaking to JR. Iditarod rookie mushers at their rookie meeting. He was sharing some of his secrets for success with sled dogs. One tip he shared with the teen mushers was about getting dogs to eat when they weren’t particularly interested in the food that’s put out. Buser reminded the young mushers that dogs like to be clean. So take a little dab of food and drop it on their paw. They’ll lick it up to clean their paw and at the same time discover it tastes good enough to eat a whole bowl full.

There was the year Jeff tried heated handlebars. He welded up handlebars made from pipe then attached a can of Sterno beneath the handlebars so the hollow pipe would act as a sort of chimney drawing the heat into the handlebars and venting out the ends. King could be seen going down the trail with smoke wafting from the ends of those unique handlebars. This all worked pretty well and was the talk of the trail until he forgot to shut the Sterno down in Ruby. While feeding his team he became aware of a burning melting sort of odor. Oops, his sled bag was smoldering from the heat of the Sterno. That was an invention he didn’t refine or repeat in future years.

Martin Buser has written, “Dog Man.” Buser shares his Iditarod experiences including “adventures, misadventures and lessons learned.” Martin knows the names of some 500 dogs. He is a true dog man and knows from first hand experience the spirit of the indomitable husky.