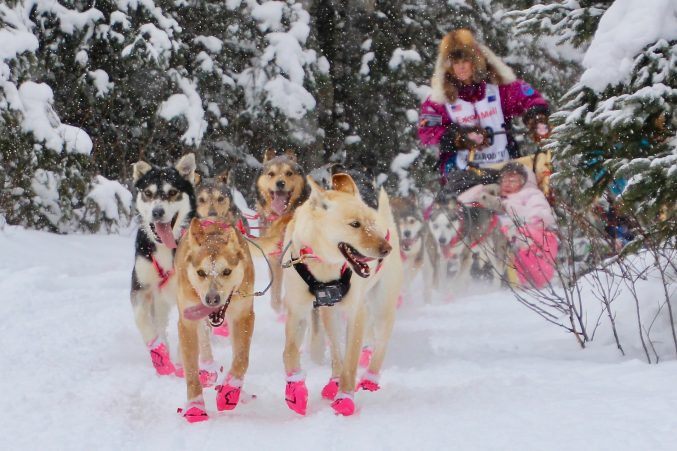 I’ve been scrolling through all of my 2018 photos.  The purpose is to select my 3 best and share with my photo club for the Best of 2018. There’s more than one reason this photo has made the cut.  1) DeeDee Jonrowe, the inspiring energizer bunny of mushers, has retired as of 2018; 2) Snow during the  Ceremonial Start makes this moment almost ethereal and 3) Excitement and wonder are clearly written on the faces of the dogs as they do what they love to do – run and pull.

DeeDee, the lady in pink, has been an inspiration to many.  In White Mountain a woman from the village approached her and thanked her for giving her the courage and strength to battle breast cancer.  DeeDee is a breast cancer survivor.  At Ruby, the checker stood with her back to the incoming Jonrowe.  As DeeDee set her snow hook, the checker turned to face her.  The checker was the late Susan Butcher.  Susan going through cancer treatment at the time, was no doubt inspired by the grit and determination Jonrowe showed in fighting cancer and returning to the trail.

Jonrowe has taken off for Nome an impressive 36 times.  She’s finished 32 Iditarod runs.  In her sixth race, she broke into the top ten finishers where she stayed for the next 11 years.  During that time, she claimed runner-up honors twice.  Later in her career she added five more top ten finishes.  If you’re adding this all up, she’s an even 16 – 16 for above and below 10th place finishes.  Jonrowe has completed the race in 9 days on nine runs.

Her string of awards includes two Humanitarian Awards, two Halfway Awards, two Most Inspirational Musher Awards, a Sportsmanship Award and the Joe Redington Sr. Award.  All the DeeDee fans out there wish a Dodge Truck and Redington Trophy would have been added to the list.  If there were an award for serving as a role model for young girls, the musher in pink would win that hands down!