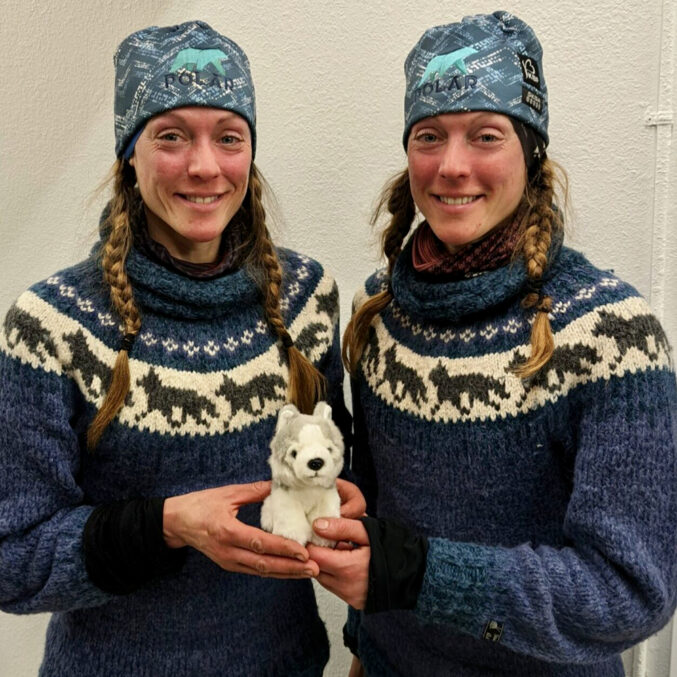 Second year rookie, Martin Massicotte reached Nome in 21st place with a time of 10 days, 8 hours and 17 minutes.  Martin attempted the race in 2020 but scratched in the Yukon River checkpoint of Galena.  Today the coveted finisher’s belt buckle is his!

Martin is has a 6th place finisher of the Yukon Quest and has an impressive string of wins in the Can-Am Crown 250.  He’s run the Labrador 400, the Hudson Bay Quest and Michigan’s UP 200.  He was well into racing as a teenager, then when he watched a video of the Iditarod he set his mind on training a dog team to the necessary level to compete in the 1,000 mile race.

For the interview at the finish line,  an interpreter translated for the French speaking Massicotte.  Martin told us that running Iditarod was an extraordinary experience, bigger and better than he ever expected.  Then he shared that his team was charged by a moose.  He defended himself and his dogs with a ski pole.  Eventually he was able to get around the moose but it was the most terrifying experience of his life.  During Martin’s interview at the arch, the Nome fire siren sounded announcing the arrival of Matts Pettersson.

Matts Pettersson has finished in 22nd position.  The hockey player who specialized as a goalie, said the wind at the blow hole was extremely tough.  For three hours he and the dogs endured the wind.  Matts praised the dogs saying they are the heroes who guided him through to the other side.  As far as starting in the warm temperature, Matts said they train under those conditions and try to prepare the dogs as much as possible.

Pettersson ran six consecutive races between 2014 and 2019.  Returning in 2022, he has completed his seventh Iditarod run.  In 2018 Matts finished the northern route in 18th place with a time of 10 days, 10 hours and 55 minutes.  His time on the northern route in 2022 time was 10 days, 8 hours and 37 minutes.  Pettersson received the Sportsmanship award in 2019.  Pettersson says, “I love the mushing world with a lot of friends and the amazing hospitality in Alaska. I love sports and to be out with my best friends, my dogs.”

As we’ve seen often in the past, the Berington Twins, Anna and Kristy, shared the Burled arch in Nome as they finished Iditarod 2022.   For Kristy this is Iditarod number 12 and for Anna it’s number 10.  In all of those finishes, they’ve been under the arch together in Nome eight times.  Anna checked in at 23rd place and Kristy claimed 24th place.  Their best finish was in 2019 when they 17th and 16th respectively.  They’ve established a new personal best with this year’s northern route run – Anna at 10 days, 8 hours and 44 minutes and Kristy at 10 days, 8 hours and 45 minutes.

The twins have come a long way since being youngsters in northern Wisconsin.  They cobbled a sled together using skies and a milk crate and harnessed the family dogs for power.   They’d seen the neighbor mush, so they decided to try it.  Together the twins along with Kristy’s husband Andy Pohl operate Seeing Double Kennel, the home of 30 amazing sled dogs.  The twins both love endurance sports and adventure and feel there is no better way to combine the two passions than mushing dogs across the incredibly beautiful state of Alaska.

At the arch, Kristy said she’d never seen it this icy or this windy before.  She added that it was great to be back on the northern route and she really liked seeing the people of the villages.  She especially appreciated the delicious stew served in Galena which she said really warmed her up.

Anna said she especially enjoyed the beautiful aurora and the moon light, both were spectacular but she would have preferred less ice and much less wind.  Anna praised her leaders and continues to be amazed at the communication between leaders and musher in places requiring precise little maneuvers like when sliding across the sea ice.  So, how does she get the team to move a little right or a little left?  Anna explained, “I’ll say gee then when they get to where I want them, I’ll say ‘right there’ then they stop turning and run straight.  They just keep turning until I say that.”

Lisbet Norris who runs purebred Siberian Huskies has scratched in Unalakleet.  She is the sixth musher to scratch.  Lisbet has finished the race in 2014 (48th), 2015 (49th) and 2016 (65th).  Her grandparents, Earl and Natalie Norris, are icons and legends in the world of Iditarod and Siberian Huskies.  Alaskan Kennel established by the Norrises is the oldest Siberian Husky Kennel in the world.  The line of dogs produced by Alaskan Kennels are known as Anadyr Siberians.  The Norris family has fielded a team in Iditarod every decade since the start of the race.  Lisbet’s grandfather ran as well as her mother and so it’s 3 generations of the Norris family who have competed in Iditarod.  Lisbet holds a degree in Northern Studies and History from the University of Alaska Fairbanks.  She operates Arctic Dog Adventure Company out of Fairbanks, an ecotourism company with the goal of educating guests about sustainable travel by dog team, skis and on foot.