Hi everybody! I’m Meredith, I started racing dogs at age six at the Willow Winter Carnival (in the 1-Dog race, which I won by 1/5 of a second!). I was first introduced to dog mushing through Girl Scouts and earning the dog mushing Girl Scout badges, and as a longtime volunteer for the Iditarod (I’ve worked security and dog handling at the start and restart, communications or Comms on the trail, and selling merchandise at the state fairs and banquets in Anchorage and Nome).  I raced my own team and other musher’s teams through high school, completing four Junior Iditarod sled dog races.

I continued to race dogs off and on through college, mostly racing other people’s dogs, spending my summers working as a sled dog tour guide, and decided that I would attempt to do the Iditarod after graduating, as my parents said they would help me pay for my first Iditarod if I graduated from college first. I graduated spring 2016 with a degree in Theater from the University of Alaska Anchorage, after having completed my first Iditarod qualifier that season (the Northern Lights 300). I finished qualifying the next year, and raced in the 2018 Iditarod finishing in 49th place!

I maintain my own kennel of racing sled  dogs, Fun On The Run Kennel, in Knik, Alaska, and am currently working as a secondary veterinary technician at Tier 1 Veterinary Medical Center in Palmer, Alaska. I’m very excited to be following along the race this year, and giving you an inside taste of what the race is like for both race rookies and volunteers on the trail! 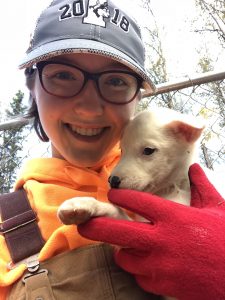 Meredith with one of her puppies summer 2018 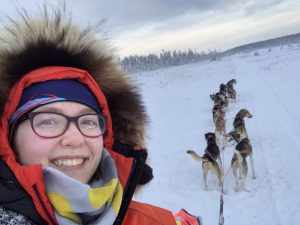