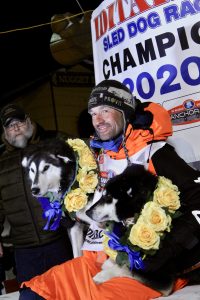 K2 and Bark, Iditarod XLVIII champion Thomas Waerner’s lead dogs, have been recognized by this year’s Iditarod finishers for their complementary style of leadership and have been jointly awarded the City of Nome Lolly Medley Golden Harness Award.

Lolly Medley was a harness maker from Wasilla and began presenting a golden-colored harness to an outstanding lead dog each year beginning in 1977. Today, the award is continued in her honor and sponsored by the City of Nome.

“As a member of the Iditarod Board of Directors, and a proud resident of the city of Nome, the Lolly Medley Golden Harness Award signifies our community’s commitment and dedication to the sled dog. We are the home of the World’s oldest mushing organization (the Nome Kennel Club). The recipients of this year’s award are both reminders that teamwork always pays off.” Said John Handeland.

After learning his lead dogs were being jointly awarded, Waerner said K2 and Bark fit right in sync with his own motivation and that the dogs’ different, but complementary personalities, made them as successful as they were on the nearly 1,000-mile trail from Anchorage to Nome.

Waerner describes K2 and Bark as having a lot of similarities in personality but still different enough that they balance out as leaders. The Iditarod XLVIII champion says Bark has more of an “old school and primitive” style of leadership and is willing to face any challenge head on. K2 is more analytical. He reads the trail for the best possible route, outcome and situation for the team. Waerner says he recognized the opportunity that came with pairing these two athletes together to lead his championship team.

K2 and Bark led Waerner and the rest of their teammates to a first-place finish, completing the Iditarod in nine days, 10 hours, 37 minutes and 47 seconds.

The City of Nome Lolly Medley Golden Harness Award will be presented to K2 and Bark at a later date.