Lance Mackey just checked in and eventually got his dogs on the trail after dodging about a 100 tourists (no exaggeration) that had flown into Rainy Pass Lodge to watch the race.   The Iditarod sets up in one of the lodge cabins which has windows on three sides so we were all able to also watch Lance negotiate trails going in all directions.   A couple of times his leader misread the “gee” and “haw” direction and headed up the bank to a cabin.   After doing a few sprints to lead his musher back to the trail, Lance disappeared on the north bank into spruce trees. 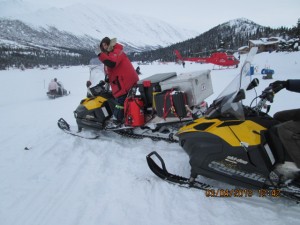 Insider Schnuelle ready to launch from Rainy Pass to Rohn

Besides Martin Buser and Matt Failor, the Iditarod front pack is basically divided into two groups.   One group led by lance Mackey and Paul Gebhardt rested for 5 or 6 hours near Finger Lake and has their sights on Rohn.  The other group is sitting here in Rainy Pass  with leader Aliy Zirkle.  This group will rest in Rainy Pass and head for Rohn.  Aliy and some of her group will probably blow right through Rohn and keep on going for twenty miles near a landmark called Little Egypt mountain.

Plus—big claim of no responsibility—-mushers are really being inventive so watch out for big unknown moves.

The dog yard in rainy pass

Walking around the dog yard in Rainy Pass, I kind of pumped mushers for their reaction to Martin Buser and companies’ fast start.   I heard somebody yell out to Jeff King, the veteran musher with 4 wins, with a question about times to Rainy Pass and Rohn. 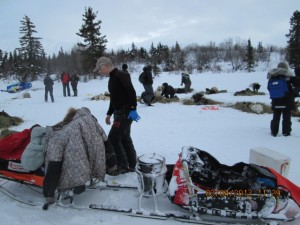 “I’ve never been here before 10AM,” yells King who is busy feeding his dogs some meat snacks.  I also get a picture of his cooker mounted on his sled runners that also doubles as a seat.  Very inventive. The key to not getting a particular “hot” seat experience is the insulated cover he installs over the cooker.  Kings inventions generally work well, but many remember the conflagration from his runaway handlebar heater several years ago.

Ken Anderson is a veteran top contender.  He was satisfied with his team and pleased he was on schedule.  He didn’t seem concerned that some mushers had pushed the pace.  I noticed that he had bells on his dogs.  “Well, I like the traditional sound of the bells.  Natives claim that the bells make the dogs happy.”   Ken also said he figured the race was really going his way after a dog coughed up a wrist wrap that had been missing for a week. 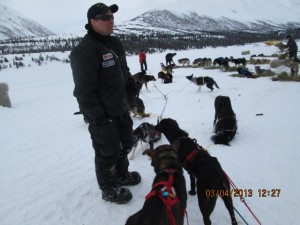 Everyonce in a while a dog in the team decides to eat fabric items like boots and wristwraps.   Unfortunately, what seemed like an entertaining way to pass time, kind of like eating bon bons while watching TV, the cloth items have Velcro attached.  The stiff Velcro refuses to pass the valve in the dogs stomach to the intestine, and , bingo you have a potential 1000 dollar vet bill or a possible mortality.  Usually a dog eats a harness or bootie on a holiday or Sunday.  So Ken had a good day when he not only recovered the wrist wrap and he also had a dog and no mortgage on the house. 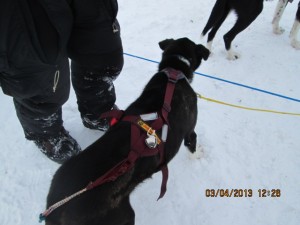 Michelle Phillips is a happy camper.  Race Judge Warren Pelfry asked about the punch section of trail enroute to Finger Lake, and Michelle said, “It was great,” but then she retracted her statement by saying she had just finished the Yukon Quest, a race known for rugged trails and sparsely marked.  “I ran the Quest, and am just happy with a trail.  This is great.” incidentally, Michelle is driving a dynamite team that observers agree is standing and eating like horses.  Additionally, Michelle won a Yukon Quest 300mile race held a few weeks before the Iditarod.  her team had zip enough to beat Aliy Zirkle’s team, so consider this team the real deal.  She deserves to be to the front.

Kelly Maixner told me he still had 16 dogs in Rainy Pass and was finally ready to race with his 3 and 4 year old team.  “I am actually 1 hour ahead of schedule.”  He trains out of Big Lake , Alaska and got most of his dogs from 2 bred females he bought from Mitch Seavey.  He has trained his dogs to run the race in 75 mile runs.

Justin SAvedis is surprising everyone with his top five performance, parked closed to fast moving Aliy Zirkle.  Justin told me he and his wife Rebecca trained the team, even as he was working full time as a teacher at a treatment center.  “How did you work and train?” 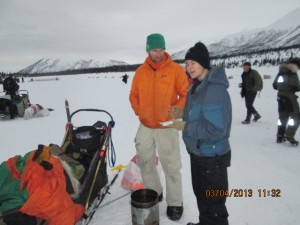 Dustin never ever sleeps, a good personality trait for a musher, talks over dog team with Iditarod veterinarian

Justin replied, “I never, ever, sleep.”  He and his wife put 3,000 training miles on his team.  He is going back to school for his masters degree in teaching.  Before mushing,he was serious mountain climber, snowboarder, and general outdoor adventure guy.   He also explained that he trained on the Iditarod trail to Finger Lake and was very familiar with the early going.

Ray Redington, grandson to Iditarod founder Joe Redington Sr., is a top contender waiting out a rest in Rainy Pass. While we talked his dogs inhaled a large bowl of hot gruel consisting of fatty meat and commercial kibble.  Ray told me his leader punched through soft snow and may have tweaked a shoulder but he was hoping she could shake it off. 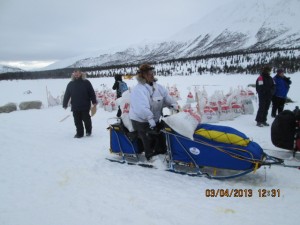