Skwentna outbound. Does Martin Buser want his record back?

The leaders have arrived in Skwentna. Martin Buser was first in and first out. He just stayed 30 minutes. What ever he cooked his dogs, they did not like, as they left the food more or less untouched. When it came to hook up the tuglines, the were barking and lunging to go. I could not help but notice, that he did not pack any straw. So really? Is he going all the way to Finger Lake??? Never doubt a 4 time Champion, but many races have been lost on the first day, none have been won.

Michelle Philips a fellow Yukoner was next into Skwentna. Her dogs, as opposed to Martins immediately gobbled down their frozen snacks. The frozen part might be the big difference, as it is very warm outside, just a little bit below freezing. Martin was trying to offer them a  soaked watery meal. Before he had Al Halman, one of the vets look at her dogs, she wanted to bed them down on straw and take the booties off. Every musher has a different routine when it comes to that. Seeing Michelle rub ointment on here dogs feet we got to talk and she mentioned that she actually mixes the concoction herself, and does not buy Algyval like most other mushers. Michelle mixes Peanut Oil with Rosemarin Oil and others nice smelly things into a soothing lotion. Michelle sure is a craftsy woman also selling gourmet dog treats in the Yukon.

The front group is quite a few of the women mushers. Michelle, than Dee Dee, who is really burning up the trail and Kelly Griffin arrived pretty close too.  I wrote this in Skwentna, but could not get into the internet, so we are headed to Finger Lake. Happy trails….Well now we are on some lake about 6 miles out and got the bgan Satelite to work. Thankfully it is only barely below freezing.

Earlier on the river, there were quite a few teams camping. More than I have seen in the past. While Ken Anderson did not want to chat , because he was feeding his dogs, Jodi Bailey was all chatty and the positive energy showed in her dogs. I was impressed by her efficient system of having dryfood, freeze dried meat, all ready in a garbage bag, just needed to pour water over. As opposed to hot water for frozen meat, she pointed out that cold water was good enough with the freeze dried. Saves some time each stop. 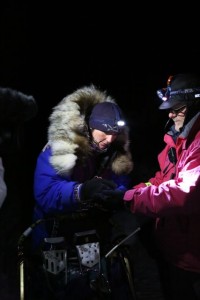 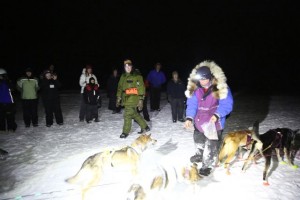 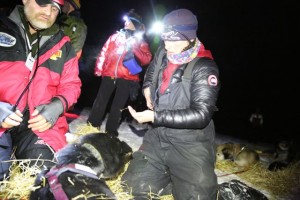