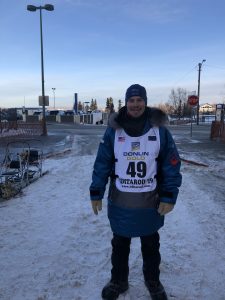 Ryan Santiago before the start 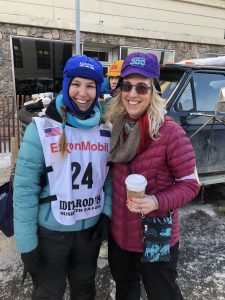 Jessica Klejka posing with her mom at the start 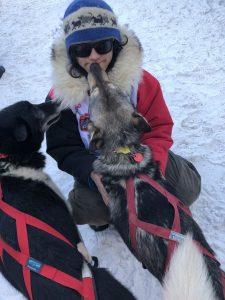 Martin Reitan with leaders Apok and Wiseman at the start (Wiseman giving kisses!)

I talked with Blair Braverman, who said she tried to sleep last night but woke up at 3am and just couldn’t get back to sleep after that. She said she planned to try to sleep more tonight – I didn’t tell her that that was my plan last year, and it didn’t work so well, but I wished her luck!

Ryan Santiago was excited to have his mom up here to ride his sled with him at the start, and is excited to be out on the trail with his team of dogs. He’s running Mitch Seavey’s puppy team in this year’s race, so he’s been well prepared for the race by Mitch, and also worked on the three week long winter tour up the trail with me two years ago, so he’s seen much of the trail before as well.

Jessica Klejka is excited to be out on the trail, with almost her whole family at the start, and the rest of her family going to greet her at the finish line also.

And finally I spent most of the day helping Martin Apayauq Reitan, and he said he’s most excited to be done with all this stuff and just be out on the trail with his dogs, where he’s most comfortable – just coming off his rookie Yukon Quest where he won rookie of the year honors, and having many years experience doing sled dog tours with his family, and running dogs with his dad, experienced Iditarod musher Ketil Reitan.