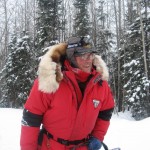 In 1977 Bob Chlupach attempted and completed his rookie Iditarod. In total he’s completed ten Iditarods over four decades. The 2012 race makes for running an Iditarod in each of five decades. After graduating with a degree in Fisheries and Wildlife Biology from Iowa State University, Chlupach took a fisheries job in Juneau. Once he was introduced to sled dogs, the canine athletes fascinated him and his life went to the dogs – so to speak. While Bob was booting and harnessing in McGrath, he was willing to share stories about his lengthy stint with Iditarod and how things have evolved over the years.

In the early days, the big white bunny boots were common foot wear while on the runners. Over the years, mushers have worn a variety of types and brands of boots. Today it’s common to see mushers in a two-layer system – often a wool boot inside of a waterproof overshoe. On this particular race, Bob is wearing heavily insulated boots with a thick sole and removable wicking liners. Bob recalls the best thing about the big heavy bulbous looking bunny boots was that if you got wet, you could dump the water out and change socks to have dry feet. 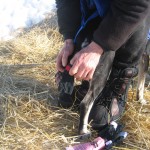 Dog booties have come a long way from the 70’s. Many fabrics and many systems of fastening have come and gone to get to the cordura and stretchy Velcro model that’s common today. He recalls a time when mushers used black electrical tape to hold the booties in place.

As for clothing, Chlupach used to wear heavy wool outer layers that were an inch thick. Insulating materials have evolved to lighter highly efficient synthetic fibers. Base layers are synthetic, first insulating layers are polar fleece. Outer layers are fancy and technical, waterproof and windproof. Bob might stand on the runners of a sled made from aircraft aluminum but he still prefers wool for his clothing. Note the black and red plaid wool shirt he’s wearing prior to donning his technical synthetic insulated one-piece suit.

Food for the dogs has changed beyond description. Nutrition labels on the kibble now a days reads like USDA requirements for human food. Canine performance has been researched and studied over the years to the point of calling sled dogs the most efficient athletes in the world. Human performance researchers are studying canine athletes with the hope of improving performance in humans. Chlupach says it was standard to snack dogs with beaver in the past. Mushers now use tripe and lamb. Chlupach prefers beaver because of its natural nutritional value but it’s not as readily available. 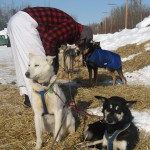 When asked about the trail – the Happy River Steps, the Dalzell Gorge and the Farewell Burn, Bob said then and now, it depends on the bib draw. The front of the pack this year found the steps to be as friendly as anybody could remember them. By the time the back of the pack mushers hit the steps, there were deep ruts not wide enough for two dogs to run side by side so one dog would be up on a firm shoulder while the other dog would be running in the rut created by snowmachines and mushers riding the break to control the sled. In the early days of running the steps, mushers tried to gain control of the sled by binding the runners with either chain or heavy rope. None of today’s mushers bind their runners.

Bob told one story about the Farewell Burn. He and Joe Redington, Sr. were running the burn together; both were a bit the worse for wear. Joe, Sr. was bleeding from a gash on his forehead and Bob was bleeding from a cut lip. They were both wet and decided to stop and build a fire to dry off. Sitting around the fire Bob was ribbing Joe, Sr. and vice versa about being banged up with little knowledge of his own bleeding wounds. Pretty soon they realized the little fire they’d built was larger than needed for a couple of guys to dry clothing. They were wondering if they’d be the ones responsible for starting another Farewell Burn.

When thinking about a musher on the trail that’s run in five different decades, one probably would guess Dan Seavey running in bib #100 to celebrate the centennial of the Historic Iditarod Trail. Dan comes close but he didn’t run in the 1980’s.  Jim Lanier is recognized as another five decade musher.  Lanier has attempted and completed fourteen Iditarod races – he’s never scratched.  He achieved his fifth decade of Iditarod races in 2010.  Seeing Jim in the 40th running of the last great race is a tribute to his perseverance and love of the race.  He wasn’t able to run the in 2011 due to hip surgery.  JIm intends to make it six decades and do it competitively.  Rick Swenson, the only five time Iditarod Champion, made his fifth decade in 2010 also.  Swenson has missed only one race, 1997, since his first in 1976.  Rick is likewise a model of perseverance.  After breaking his collarbone on the Happy River Steps in 2011, he finished the race in 20th place.   Bob, Jim, Rick and Dan are great role models for all who aspire to run the Last Great Race.  Thank you for your perseverance and dedication.