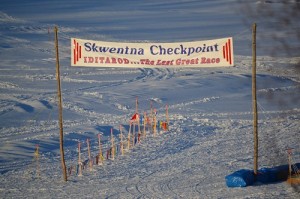 Todd and his brother Scott are currently making plans from their home in Tacoma, Washington to return for their twenty-second year of running the river portion of the Skwentna checkpoint.

Todd and Scott Silver have been involved in the Iditarod with their company, JL Darling LLC, as makers of Rite in the Rain paper.  Rite in the Rain is what holds the documents of the race together in the often unpredictable weather of Alaska in the winter. From check sheets, to trail signs, to the ever present yellow vet notebooks, Rite in the Rain is well represented on the trail.  They are especially proud of the vet notebooks which they design and manufacture in Tacoma.  A little piece of them goes down the trail in every musher’s sled!  http://www.riteintherain.com/

In 1993, the trail manager invited Todd up to Alaska to see the race they had become involved in in person.  He took full advantage of the offer and went to Anchorage for the start and then headed up the trail to Skwentna.  In those days, Skwentna was a daytime checkpoint where the mushers came in and parked themselves on the river any which way they wanted.  Todd stayed for a day and met, and got to know, Joe and Norma Delia and watched the race that would eventually get under his skin so badly.  The following year, Joe and Norma invited Todd to come back with a game changing question, “Are there any more like you?”  So Todd headed back in 1994 with his brother Scott, and they’ve been doing the same every year since then.  As time passed, Joe and Norma passed off more and more of the responsibilities of running the checkpoint to the Silvers, but Joe Delia and Rob Fritts remained the “official checkers.” Until finally the Silvers found themselves in the position of managing the river portion of the checkpoint, while the local Skwentna Sweeties took over the kitchen portion of the job.  The next generations have now taken over…  Keegan, Cindy, and Stephen Fritts oversee the Sweeties and Todd and Scott Silver run the river. 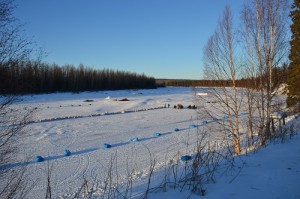 timing of teams arriving tripled the complexity of the logistics.  The fifty to sixty teams arriving in the dark of night have to be parked in a safe method, thus was born the “herring bone” layout of the river parking spaces.  Changes in trail maps, equipment, and race strategies all played a role in the shift, and make Skwentna what it is today…. an incredibly crucial location in the very early stages of the race.  Every musher will pass through the checkpoint in approximately 24 hours.  The checkpoint has become less of a tourist stop with the shift, although there are still usually bonfires and celebrations to be shared as the teams arrive!

The Silvers and their crew of about fifteen family and friends come up every year to volunteer.  The crew consists of some veterans and some rookie volunteers.  Todd attributes the smoothing out of the logistics to the combination of new and experienced help.  He is quick to point out the need for “young legs” to park the teams in their herringbone formation on the river!

The crew, now known affectionately known as the Darlings, arrives in Anchorage on the Thursday before the race. They attend the first ten sleds or so of the Saturday Ceremonial Start downtown before hopping on their rented snowmachines and blazing the trail from Deshka Landing to Skwentna…. With a stop for coffee at with Dan and Jean Gabryszak at Yentna Station Roadhouse of course!

So, by about 4:30pm on Saturday, the whole crew is in place, including the Sweeties who have flown in.  That evening is spent flattening the river with snow machines and catching up with old friends!  The next day, the checkpoint is set up on the river:  sixty bales of hay are put in place, a hole is dug in the ice for water, the cookstove is set up to heat water for the racers, the official welcome banner is hung, the trails are cleared out, the drop bags are alphabetized…. and everything is ready to go by 7:30pm. 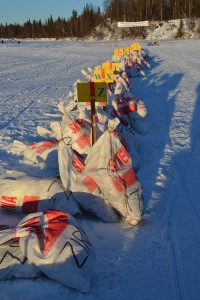 Teams will arrive throughout the night, with the majority of them stopping to enjoy the hospitality for a bit.

Mushers leave Skwentna on Monday, the Sweeties and the Darlings have their annual celebration dinner on Monday night and by Tuesday afternoon, the checkpoint is cleared out and shut down for another year as everyone heads back to their homes. Only one year did the crew head to the finish in Nome.  In 2003 when the start was moved to Fairbanks, the Skwentna checkpoint was missed, so the Darlings headed to Nome instead.

When asked what brings them back year after year, Todd says, “The thrill of the Last Great Race.”  He continues to be amazed by the athletes, both human and canine. He enjoys the sense of reunion each year, and the warmth and fellowship of the people.  He says he is grateful for the opportunity to serve as lower forty-eighters.  When asked if there is a musher he “secretly” roots for, he says that Dee Dee Jonrowe has a special place in his heart. He remembers her visiting with Joe and Norma Delia on her training runs and so he feels like she is a “hometown” girl in a way.  It always gives the crew an extra smile when she pulls in.

Plans are already underway for the 2015 Iditarod.  Logistically it makes sense for them to start working now as they are staging the checkpoint from Tacoma.  They take pride in the fact that Skwentna is a checkpoint the Iditarod Trail Committee doesn’t have to worry about.  They take care of it all themselves.  The menus are being planned, the food is being ordered, the snowmachines have been arranged for, and the Anchorage hotels are being booked.  They are also wading through the long list of friends and family who want to volunteer this year.  One thing he knows, he is looking for those younger legs to help!

I think Todd speaks for so many involved in the Iditarod when he says, “I’m looking forward to getting back.”