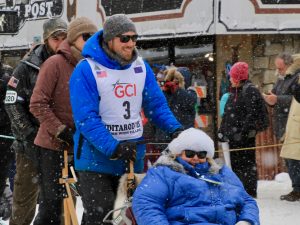 “It’s exciting to see Tim earn this award in only his second Iditarod,” said Iditarod CEO Rob Urbach. “Finishing in the top 20 is no small feat and Tim showed that his canine athletes trusted that he would lead them across the wilds of Alaska. We look forward to seeing Tim grow in this race moving ahead.”

Pappas’ 20th place finish came with a team from four-time Iditarod champion Martin Buser’s Happy Trails Kennel. When not racing, Pappas runs tours at the kennel in the summer or can be found hunting, fishing or playing the banjo. He is also a former apprentice of musher Billy Snodgrass.

“We are proud to sponsor The Last Great Race and support mushers who are keeping Alaska’s time-honored-mushing tradition alive,” said Bal Dreyfus, Matson’s Senior Vice President, Alaska. “Congratulations to all of this year’s teams, and well done to Tim on the remarkable progress he’s made.”

Pappas’ prize will be presented to him at a later date.