Most sporting events have a stationary arena or track, where fans sit to watch the game, the race, the contest. They drive there, park, walk to the event’s arena or stadium. They take the train or light rail, charter 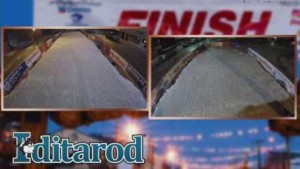 a bus, traveling to the event.

But for the Iditarod Trail Sled Dog Race® which runs through remote Alaska, off the road system, fans find being at the event in person a challenge.

Enter the live feed via Iditarod Insider. Race fans who subscribe to Iditarod Insider video package can watch via live feed the mushers coming into the finish line on Nome’s Front Street. Additionally, these avid fans participate in a live chat with each other to keep up to date on what the race happenings are, who’s coming in next, and the red truck traffic.

The  red truck traffic is an Idita-Lurker creation from a race year where a red truck was often seen driving beside and around the finish chute. People in the race chute learn every year to wave at the live feed cameras on each side of the burled arch, and if you’re following on the live chat, the fan comments are just like having a conversation with your friend at a basketball game—immediate and focused on the event at hand.

The live feed fans let the tech people know when there are technical issues with the feed or audio, and they learn the real life difficulties of establishing and supporting live feed in Nome, Alaska. When people say, “It’s not like the Lower 48,” they’re right. It isn’t like the Lower 48.

And, the live feed fans comment on all that happens in the finish chute—one commented on how it was nice to see Martin Buser wiped frosty dog faces as he thanked each dog, Patrick Beall and Larry Daugherty are nicknamed The Lost Boys in the live feed comments,  fans are cheering for the Siberian teams and planning their coffee breaks around mushers’ projected arrivals.