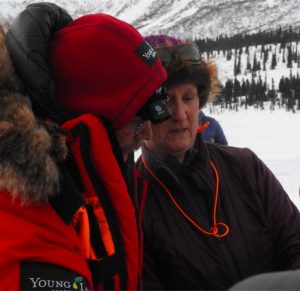 Between Willow and Nome rises one of the greatest geological features in all of Alaska: the Alaska Range. It is the gateway to the Alaskan interior; a weather break that separates the relatively warm and wet climate to the south from the colder, arid expanse to the north, where annual rainfall is comparable to a desert. The differences between these ecosystems is stark. For instance, on the south side of the Alaska Range, fireweed, an iconic flower, may tower over your head when in full bloom, but on the north side the same plant may stand shorter than your knee. The largest mountain in North America crowns the range and is so large that even on a beautiful day it creates its own weather and often shrouds its upper half––one of the greatest vanishing acts evident in nature. Two of the most infamous sections of the Iditarod trail flank this range and command respect from both rookies and mushers alike. Teams ascend the range and climb the arduous Steps from the south and descend through the Dalzell Gorge to the north––a steep downhill section not unlike a double black diamond ski run powered by dogs. But in the middle of it all, is the strikingly beautiful and comparatively docile, Rainy Pass. 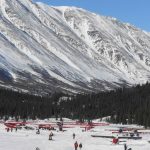 Here, nestled between mountain peaks, sits Pontilla lake––a large frozen expanse that’s perfect for landing ski-planes. Above the shoreline to the east is a small sprawl of wooden cabins called Rainy Pass Lodge, our hosts for Iditarod. One cabin is used for behind-the-scenes checkpoint operations, where one woman has earned a reputation for being the checkpoint saint.

Linda Peterson from Seattle, has volunteered fourteen of her nineteen races as a checker at Rainy Pass. Perhaps no one knows better than her what it takes to make this checkpoint run.

Before the teams arrived this year, she and her husband, Dale, borrowed two snowmachines from the Perrins, the lodge owners, and spent the day preparing the checkpoint. They moved 26 bales of hay to each side of the dog yard on the lake, just as many boxes of Heet, and all the musher food bags––each of which weighs as much as sixty pounds and each musher can have as many as three. It’s a bit of process.

“We’ve got to take them out of the barn where they’ve been stored, and pile them up on the lake,” she says. “count them, alphabetize them, and then organize them so the mushers have an easy job of it when they come in.” After completing those tasks, they cut a hole about three and a half feet through the lake ice so that they could haul water to the checkpoint. Next it was onto organizing food into meals for the duration.

As other volunteers were flown in, they were put to work. “It’s downright amazing when you bring all these people from all walks of life and they come together and they put their shoulder into it and it works.”

Linda and her husband stumbled into volunteering in 1999, when they and a friend traveled to Alaska visit friends Anchorage. They watched the ceremonial start in Anchorage and saw Joan Rivers go by in the Iditarider sled, which made them laugh. The next day they went to Wasilla, where the restart used to begin, and the sister of the friends they were staying with was married to a veterinarian. As the teams went by, mushers kept saying hi to her hosts whom they recognized from the trail. Already the race was charming these two, so when their friends suggested they charter a plane and fly to Yentna, they didn’t hesitate to go.

That night, the checkers needed volunteers to direct the mushers to the checkpoint and Linda and Dale were excited to help. They stood out there in the still night overwhelmed by the silence of the world apart from a lone owl hooting. Overhead the northern lights danced. Eventually, a distant light approached; a musher’s headlamp appeared and disappeared as it traveled the undulations of the hills. As it grew brighter and stayed steady, a new sound cut through the darkness: the sound of sixteen dogs breathing in unison.

As the first musher arrived, she and Dale gave them directions to the checkpoint, and all sixteen heads turned to look at them. She recalls, “They had those beautiful teal eyes because it was dark. They looked like they’d been sprinkled with silver glitter.” The musher gave the team the command to go and all sixteen heads turned away toward their destination. “As they ran by, they kicked up the snow and they looked like they were running on a cloud. I was hooked!” Nineteen years worth of memories later, the sounds and sights of that first dog team breaking through the crisp night remain as vivid as ever. 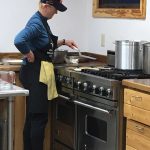 The next year, her friends from Michigan volunteered in Rainy Pass and afterward told them about the last dinner they had at the checkpoint which was less than appetizing––tunafish, chili seasoning, and spaghetti sauce. They told her, “Rainy Pass needs a cook.” Linda thought she could improve that aspect of Rainy Pass. The Iditarod sends food to each checkpoint, but if the volunteers don’t have the foresight and the creativity to make it last, the pairings can grow increasingly unusual as the race goes on. Many of the other checkpoints are located in Native villages and often times locals graciously bring dishes to the checkpoint to share which fills out the menu. However, in Rainy Pass, there’s nothing but a lodge and lake, so meals are limited to that which is flown in for the race.

“I really enjoy cooking and its a challenge for me to take what they send us, which can be really different items of food, and make it edible,” she simply. “We’re not a village. I try to make it a village.”

Every morning, Linda wakes around 3:30 to heat water for dishes, start coffee, and thaw out frozen items for breakfast. On paper, she volunteers as a checker. But anyone who’s ever stayed in “her” checkpoint knows that’s only the start. The warmth of her hugs as volunteers arrive, her unending work ethic, and her sense of hospitality stretches beyond the simplicity of that one-word description.

“I love the camaraderie,” she smiles. “They’re all special. They come out here and volunteer and we’re all on the same level, so to speak.”

At every checkpoint, there are more logistics than can be seen from the outside. Even the mushers are oblivious to the multitude of moving pieces along the trail. At times, the volunteers feel frazzled and perhaps under-appreciated. That fellowship, however, coupled with a love for the event, can pull people through the most challenging moments, and ultimately fortifies lasting friendships along the trail. Simply put, without the volunteers and the spirit they bring, there would be no race. “It’s a lot of hard work and can be intense, but I really enjoy the people,” she says. “It’s family.”