When teams reach Eagle Island, they have covered about half of the miles they will be traveling on the Yukon River.  In his Trail Notes, Don Bowers, Jr. calls this section of trail that runs upstream and into the wind on the Yukon long and boring.  He says, “There is nothing but wide-open river and bend after bend, island after island, bluff after bluff.”  There are a few summer-only cabins and houses that are scattered along the 62 mile distance.  In the winter, everything is abandoned and quiet but in the summer there is quite a bit of boat and barge traffic and a few fishing and hunting camps along the shore.

Mushers say that being on this section of trail is like falling off the edge of the earth.  If you wanted total peace and quiet this would be the place to go provided you could hold up against the wind and severely cold temperatures.   Don reports one musher saying, “It’s like you’ve gone to the edge of the planet, fallen off and discovered that the Place Down Below really has frozen over.”  To add to the loneliness, the wolf packs howl all night to welcome and bid farewell to their domestic cousins.

Ralph Conaster is the only person living at Eagle Island.  The checkpoint used to be in his spacious cabin until it burned down a few years ago.  Ralph went back to living in his tiny old cabin which is not large enough for Iditarod to use as a checkpoint.  With no community buildings, Eagle Island is a tent checkpoint that’s located near Iditarod veteran, Ken Chase’s, summer fishing cabin.  The checkpoint is set up in a Quonset shaped tent called a Dodge Lodge.  It’s heated and has straw on the floor for sleepy mushers and volunteers to nap on.  The humans at Eagle Island checkpoint get the chance to experience the insulating or “R” value of straw.  We dogs know all about that!  Finger Lake and Cripple are two of the other “tent cities” that spring up on the Iditarod Trail as checkpoints.

Being that I’m a lead dog, Don mentioned a few things in his notes that really caught my attention.  Because there is little shelter between Grayling and Eagle Island, mushers need to have coats for their dogs, especially the lead dogs.  We leaders will experience the full force of the wind while breaking it for the swing, team and wheel dogs behind us.  He also warns about drifted sections of the trail, rough or snow-free ice and the possibility of overflow.  It’s best to stay right on the trail as the tricky Yukon can have sections of open water and thin ice.  It’s a good thing Iditarod has Trail Breakers to scout and set the trail for the teams!

With all this talk about the Yukon River, I did some research between runs with my team to learn a few things about the great river.  As it turns out, Yukonna in Athabascan means “great river” as does the Gwich’in word Yukunah.  Yupik Eskimos called it Kwiguk, meaning large stream.  A little more than half of the river flows through the U.S. while the other half is in Canada.  The head waters of the Yukon are in northern British Columbia.  It flows in a westerly arc across the Yukon Territory and then into the state of Alaska where it empties into Norton Sound of the Bering Sea.  The river is 2,300 miles long and is the fifth largest river in North America.  It’s longer than the Colorado, Columbia or the Rio Grande rivers.  During the last Ice Age, 10,000 years age, the Yukon River Valley was ice free.

Just like for Iditarod, the river has served as a transportation route throughout history.  For nomadic hunters from Asia, it was the gateway to the rest of North America.  The Eskimos and the Athabascans used it as a trade route.  In the mid 1800’s, Russian-American and Hudson’s Bay fur traders extended their Voyageur routes into the Interior by canoe and keelboat on the Yukon.  In the late 1890’s the gold rush saw grand sternwheelers like the Sarah, the Suzie and the Hannah navigating the river.  The huge powerful boats carried stampeders and supplies to the boom towns.  By the 1930’s, after the completion of the Alaska Railroad and the arrival of cargo aircraft, most sternwheelers were retired.  Smaller boats, barges and snowmachines remain plentiful today.

For the most part, the river is a slow-moving braided stream that is shallow except during spring runoff.  While narrow in some spots, it is a mile wide in other places.  For three months out of the year, the river can be navigated from is mouth all the way to Whitehorse in the Yukon Territory.  The Yukon Territory took its name from the mighty Yukon River.  Surprisingly, there are only four vehicle bridges across the entire length of the river along with a couple of pedestrian only bridges.  In some places, car ferries operate during seasons of open water but in winter, cars cross on the frozen ice.

Well, there you have it, a cold forlorn description of Eagle Island and some facts about the mighty Yukon.  You can find out more about the river by checking the internet sites I used – Wikipedia and the Canadian Encyclopedia.  There’s another good resource by Harry Ritter called Alaska’s History.  Handler refers to that little book frequently.  In seventy long miles, teams will reach Kaltag and leave the Yukon behind.  Next Handler will tell us about Kaltag and a famous dog named Yukon.  Stay tuned and remember in everything do your best every day and have a plan. 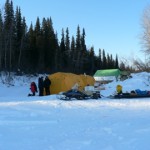 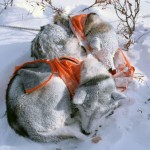 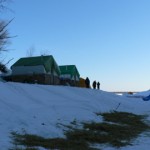 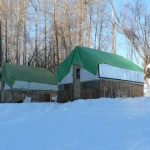 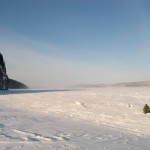 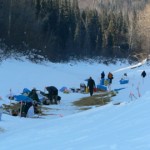 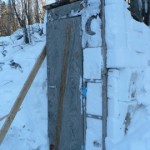 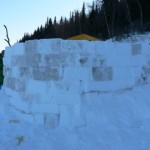