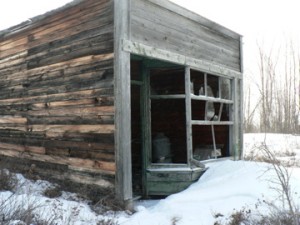 BOO again! Another ghostly greeting from ghost town and checkpoint, Iditarod. Have you ever wondered where the word or name Iditarod came from? I’ve heard 3 explanations so I’ll share them with you. First, Iditarod was a word used by Athabascans that meant FAR DISTANT PLACE. Second, Iditarod was a word used by other Native Alaskans that meant CLEAR WATER. Now that’s really interesting because Eau Claire (where I live) is French and it means CLEAR WATER. Finally, a ROD is a measure of distance and so one miner might ask another, “How’d you do today?” The miner would answer, “I-DID-A-ROD.” The most commonly accepted meaning is “Far Distant Place.”

Six miles out of Ophir it’s CRITICAL to know if it’s an odd or even year. In odds years, teams go left at the fork in the trail, taking the “southern” route but in even years, teams fork right and travel along the “northern” route. Aren’t you wondering why there are two routes? Iditarod is a SIGNIFICANT event that requires a monumental amount of work but provides great excitement in the everlasting winter for the villagers of interior Alaska. It’s a wise choice to divide the work as well as the excitement between the small interior villages along the alternate year routes. 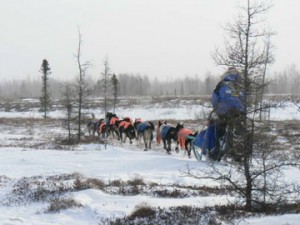 The ninety miles of trail between Ophir and Iditarod has many large spruce, birch and cottonwood trees. Mushers will climb from 800 feet in elevation to 1,100 when crossing the Beaver Mountains. There are many creeks – some with over flow, frozen swamps and lakes as well as tundra, large timber and brush along this section of trail. If a musher wishes to rest the team, there’s a cabin not quite half way to Iditarod. Don Bowers in Trail Notes describes the cabin as a dilapidated plywood shack with a very basic stove and says, “There’s not much there but it’s way ahead of what’s in second place.”

Except for one trapper, nobody has lived in Iditarod since 1935. The checkpoint is set up in an old house that until a few years ago, that trapper used. But like the miners, the trapper has also moved on. Besides the trapper’s house, there is a bank vault and a few other shelters still standing. 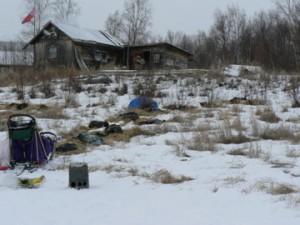 Gold was discovered on Christmas Day of 1908 in Flat located just a short distance from the Iditarod River. News traveled and those seeking riches and adventure found their way either by land on the frozen Iditarod Trail or by river on steamers and then established a mining camp on the river bank that became known as Iditarod. Iditarod and Flat were called the Twin Cities. After reading a story in the SitNews by June Allen published in March of 2005, I learned a few things about the Twin Cities that I want to share. The folks living in Flat and Iditarod enjoyed the conveniences of gaslights, telephones, newspapers, banks, restaurants and hotels and even a motor car. A tramway connected Iditarod and Flat. This turned out to be the last great strike of Alaska’s Gold Rush. The mines were depleted within a few years and the miners left but not before $33 million dollars of gold had been mined.. The post office closed in 1925. Don Bowers claims that back in 1910, Iditarod had a population of 10,000. But today with a population of zero it’s a lonely, haunted place even during the activity of Iditarod. Flat has a population of four.

Well, there you have it – some history and information about Iditarod, the second ghost town on the Iditarod Trail. Do you suppose the that mushers, dogs and volunteers can feel the “spirits” of the departed miners as they pass through Iditarod? Handler just brought me a new book. It’s called Gold Rush Dogs by Murphy and Haigh. It can’t wait to read and share stories about those AMAZING dogs as soon as I have a little break from all the action of Leader School. Thanks to my friend, Kim Slade the 2007 Teacher on the Trail for sharing her pictures of Iditarod. Next Handler is going to tell us about Shageluk (it’s not a ghost town). Stay tuned for that story and remember in everything do your best everyday and have a plan. 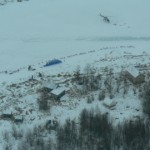 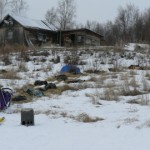 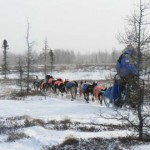 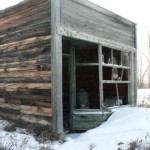