Eye on the Trail: Sled Dogs – The Ultimate Athletes 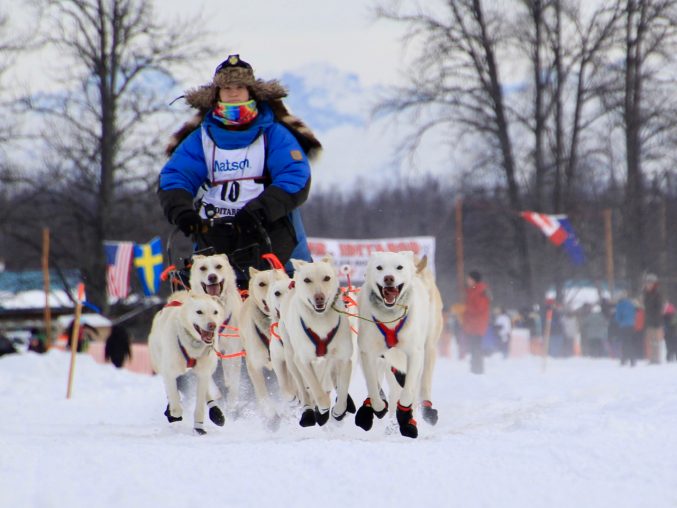 A standard marathon is 26.2 miles in length.  Iditarod’s Gold Trail Loop of 2021 was 832 miles long.  That is pretty close to the length of 32 marathons.  If you’ve ever met a marathoner at the finish, the runner is spent.  Even if you give your runner something to drink, a chunk of banana and an orange slice then let them have a couple minutes to eat hydrate before you ask this all-important question, “Are you ready for 31 more?”  The answer would be a resounding, NO!  Ask the same question of a sled dog, the dog would be ready to go, NOW!

How do they do it?  These canines are the ultimate athletes; many say they are the greatest athletes on earth.  How do they perform at such a high level day after day, mile after mile?  They get to Nome and stand under the burled arch wagging tales, lunging and barking to go further.  They have to stop because there’s no more trail.

Sled dogs have something called a metabolic switch.  Does it operate like a toggle switch or does it operate like a dimmer switch and what happens when the switch activates?  Chief Iditarod Veterinarian Stuart Nelson, DVM has explained the phenomenon to audiences of race fans many times.  For nearly two decades, Mike Davis, DVM and veterinary physiologist at Oklahoma State University has studied the metabolic transformation that occurs when sled dogs participate in long distance racing

When those jazzed dogs took off from Deshka Landing they were getting their energy from   glycogen. The same would be true of a human running a marathon.  Glycogen is formed from glucose that comes from the foods we eat and then is stored in the muscles. When glycogen supplies in the muscles drop to a low level, the human athlete becomes fatigued and needs to rest and eat to replenish the glycogen.  The canine responds differently.

The metabolic switch flips and the source of energy for sled dogs changes.  Sled dogs go to a glycogen-sparing metabolism.  They no longer deplete the glycogen in muscles.  Davis says they begin pulling fat from the blood stream into their cells and use it for energy.  When racing, nearly 60% of a sled dog’s diet is fat based so fat is readily available as fuel.  The remaining 40% consists of carbohydrates and protein.

Typical feeding patterns for long distance racers are based upon sled dog science.  Mushers snack dogs every two hours.  Look at the GPS tracker and you can see speeds drop to zero in two hours intervals while dogs get a high fat snack.  During longer rests, athletes enjoy gourmet high fat meals complimented with appropriate quantities of carbs and protein, nutrients and minerals.  Sled dogs consume 12,000 calories per day during a race.  That’s huge compared to an average human who consumes 2,000 calories a day.

As has been said many times, it’s not the size of the dog that counts but what’s inside the dog that counts.  The way sled dogs change food to energy through their metabolic processes and how those processes transform in long distance racing is on the inside and that is what makes sled dogs the greatest athletes in the world.