The Iditarod starts in Anchorage each year on the first Saturday in March. It ends when the last musher reaches Nome. The race has started in downtown Anchorage since 1983. The Saturday start in Anchorage is a ceremonial start and does not count in the overall time in the race to Nome. The teams leave the start line at the corner of 4th and “D” at two minute intervals, starting at 10 a.m. The mushers follow multi-use trails through Anchorage to Campbell Airstrip, an 11 mile run.

On the following day, Sunday, mushers will again line up for the ReStart in Willow. At 2 p.m., the first teams will depart on their way to Nome, leaving in 2 minute intervals until all of the teams have left. The clock starts for the mushers as they leave the starting line. The difference in starting times is ‘made up’ on a musher’s 24 hour mandatory layover.

It is impossible to predict the exact day or time that the first musher will cross the finish line in Nome. However, we expect it to be between 9 and 12 days, arriving the second Tuesday or Wednesday after the race restart. Doug Swingley, 1995 Champion, completed the course in 9 days, 2 hours, 42 minutes and 19 seconds to become the first musher from outside of the state of Alaska to ever win the Iditarod.  Since that time, records have been broken and the Iditarod Trail Sled Dog Race has continued to celebrate the importance of the dogs of the Iditarod. 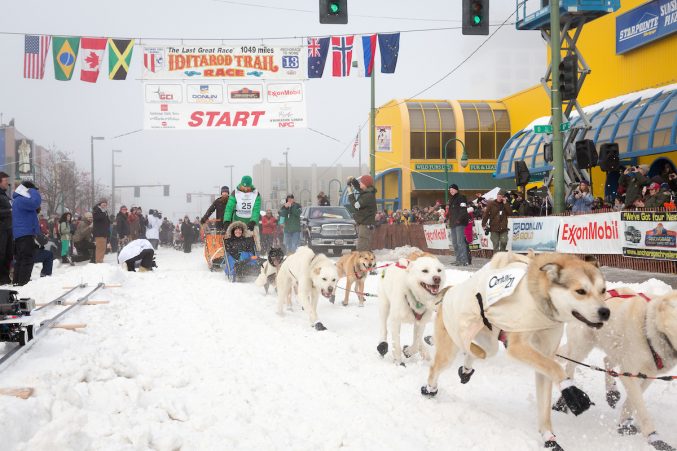 The rules of the race layout certain regulations which each musher must abide by. There are certain pieces of equipment each team must have — an arctic parka, a heavy sleeping bag, an ax, snowshoes, musher food, dog food, and boots for each dog’s feet to protect against cutting ice and hard packed snow injuries. Learn more about the race rules here.

Mushers spend an entire year getting ready and raising the money needed to get to Nome. Some prepare around a full-time job. In addition to planning, the equipment and feeding needs for up to three weeks on the trail, hundreds of hours and hundreds of miles of training have to be put on each team.