Leaping Libby here:  Alaskan husky puppy, living her best life in the Northwoods of Wisconsin, and dreaming of becoming a sled dog.  I’ve gotten to know most of the folks here at the kennel. They’re all pretty wonderful, each in their own unique way. 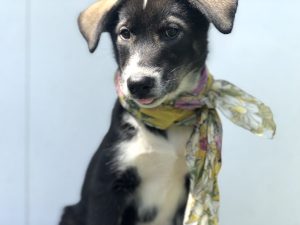 Each of the sleddogs has their own personality, their own likes and dislikes, their own way of being around each other.  I learned pretty quickly not to get in the way of Jenga, the bossy sled dog who has no patience for puppies. But I also learned that Forrest is kind. Hari and Clem are calm.  Flame loves me like a generous aunty.

Wicksy is a bunch of goofy fun. Pepe is a genius and will steal your bones. Grinch is confusing and pees on everything.  Spike is a happy floof with a huge head. Colbert loves food almost as much as he loves running (or is that running almost as much as food?). Brilliant Pepe is The Queen and leader of the kennel. 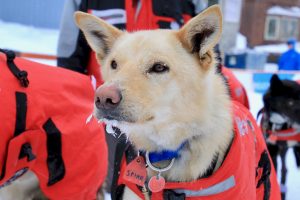 Our kennel is full of personalities.  I’m starting to see how this group all fits together, and I’m dreaming about how I’ll fit into this thing they call a TEAM.

Sometimes I learned about them the hard way.  Take Dora, for example.  Dora is known for speed and fun and chaos.  Chaos is when you never quite know what is happening because you are going in a million directions at once, and all of them very fast.  Sounded like great fun to me.

Ever have a friend who was lots of fun a lot of the time, but then sometimes a lot of trouble?

One day, we were headed out to the bog for a splish splash, and I thought it would be great fun to follow Dora.  On our way, she would speed off the trail after this sound or that smell, and I’d chase along, only to discover she’d bounded back, and I had to flail about trying to find everyone again.  And once we got there,  for some unknown reason, she pounced me and trampled me right into the bog.  Now, where did THAT come from?  I learned that I needed to be careful about Dora’s kind of fun. 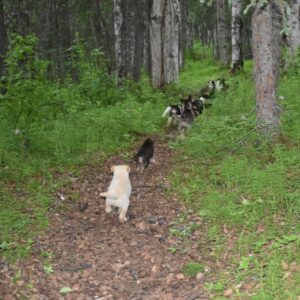 Later, I was thinking about Dora, when the humans started dressing sled dogs up in harness to run as a TEAM.  I had no idea what a TEAM was until I saw our humans connect a bunch of sled dogs together and attach them to something they could pull.  During fall, it was scooters, bikes, and carts.  This day, it was a sled.

As I watched the humans gather up the sled dogs, I made a mental note of who got to go.  Of course Pepe was in front, holding the line out calmly while the others were trundled up and hooked in.

Now, when a bunch of sled dogs are hooked up to pull something, they ALL get REALLY excited.  And LOUD.  They bounce and pull and jump and shout.  There is so much energy, it seems like they are going to explode.  Then, WHOOSH, they are off and away.  I made a new mental note to ask Pepe about this whole TEAM thing when they returned.  If they returned. 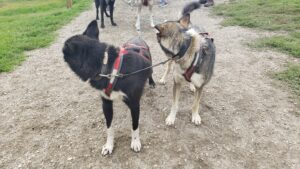 Looking back at the TEAM.

”Um, Pepe?”  I asked quietly, after they had returned and had eaten snacks and rested awhile.  “Pepe, I’m confused about TEAM.  I know why you are part of the team. You are wise and brave and all the dogs and humans trust you to lead them.  Today I watched all the other dogs get put in harness, and…. Dora?  She’s a lot of fun, but…. Dora?”

Wise, wise Pepe just chuckled and said, “I’d rather have a team with some Doras in it than a team with only Pepes.”

Pepe explained that a team needs sled dogs with a lot of different strengths.  “Not only is Dora fun and chaotic, but she is super strong, fast, and loves to pull.  Her energy is just what we need, tucked carefully into the team.  Controlled chaos is the best chaos.” 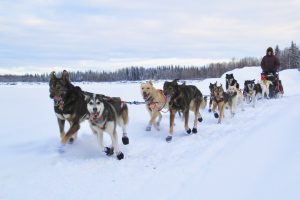 Then Pepe explained how all their unique traits make them important to the team.

“Calm Clem makes a great partner to help a boisterous teammate on the other side of the tug line. Happy Wickson keeps up everyone’s mood.  All the sled dogs have something special to help the team.  It’s when we have all these unique personalities and strengths together, all working toward a common goal, that we do best.  Of course it helps to have Blair and Quince, the awesome humans who coach us.”

In my head, I thought, “and awesome leaders like you, Pepe.”

Turns out, a sleddog’s weakness can become their strength.  Pepe told me the story of how Hari, who is blind, once saved the team when they were in a white-out (a snowstorm when no one could see in front of them).  Pepe stopped and wouldn’t go forward into the storm.  None of the other dogs they tried would pull in the storm.  But when you can’t see, your other senses  (like smell) get really strong. So Hari was put in the lead. Hari was able to smell his way, and he led the team home. 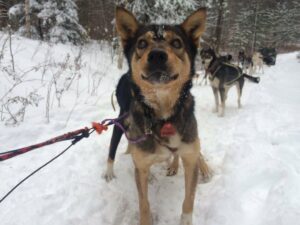 Hari, the blind, hero sleddog on the Bravermountain Team.

“Do all sled dogs earn a spot on the team?” I asked.

I guess Pepe could sense my own worries about fitting into the team.

“Sometimes, as a puppy grows up, they realize that they don’t really want to pull and race on a team.  Glory was like that.  The mushers recognized that she wasn’t happy, so she went to live with our musher’s mama who lives in the Pacific Northwest.  Now Glory sleeps on the couch and gets to run on ocean beaches.”

“Don’t worry,” she said, as my nose popped up, “I can already see your heart is set on running with us.  As you grow and learn and become the sleddog you are meant to be, you will find your place in the team.”

To learn more about these wonderful personalities, and life as a sleddog TEAM, check out their true stories in a book by the people who know them best:  their mushers, Blair Braverman and Quince Mountain:  Dogs on the Trail: A Year in the Life.

To learn more about Hari’s heroism, check out Blair Braverman’s TedxOshkosh Talk:  What Sleddogs Can Teach Us about Courage.

To learn more about character education and teamwork through the Iditarod, check out these links: