Get Ready to Visit Flat!

Posted by Jen Reiter in Checkpoints, Compare and Contrast, Reading
Date: February 7, 2021 8:19 am 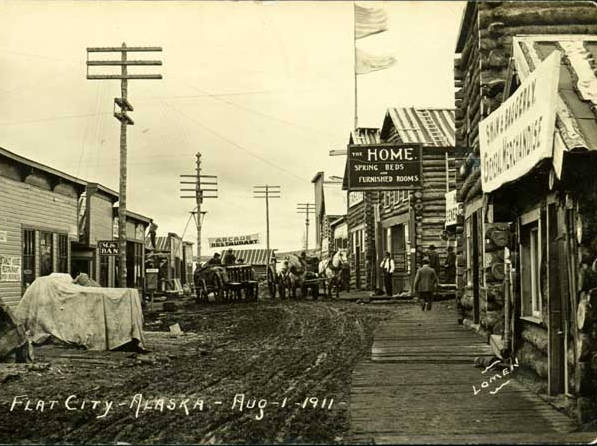 For the first time in Iditarod history, the teams will be traveling seven miles southeast from Iditarod to the town of Flat, Alaska.

Flat came into existence after the Christmas Day, 1908 Gold Rush on Otter Creek by John Beaton and W. A. Dickeman. Although word of that strike got out slowly, in 1909 more miners arrived in the area and set up a small camp they called Flat City.

Over time it became the largest mining camp in the Iditarod Mining District and was connected to Iditarod via railroad. By 1914, the town had grown to 6,000 residents and included an elementary school, telephone service, a restaurant, a laundry, two stores, a hotel, a pool hall, and a jail. By 1920, Flat had become the main supply center and the largest town in the district, even larger than Iditarod itself. Despite all of this, there has been some question about whether Flat was actually ever a formally recognized town as no official survey was done! However, most people seem to be of the mindset that since it had postal service, it must be a town! By 1930 the town’s population began to decrease. Records from that year show only 124 residents. Between 1986-2000, the primary year round residents were a family of five, with the 2000 census showing four residents living in one household in the town. The post office was closed in 2004 and the 2010 Census showed a population of zero.