Friction, Sleds, and Why It’s Important to Get It Right

Trent Herbst, Iditarod veteran musher and Idaho teacher, shares a unique program with audiences focusing on a very hands-on experience for his 4th graders. The students choose a project to build and it’s ranged from rolling to floating to sliding vehicles. The sliding ones, the sleds they build, get pulled by a couple of Trent’s sled dogs with the sled builders hanging on for the ride.

Friction and dog sleds have a special relationship.Whether the team is pulling a sled to carry loads like wood for fuel, or water for drinking, or the meat for food or to race 1000 miles, getting the friction right is important to maximize the team’s energy.  A sled built so that there is too much friction requires a great deal of energy from the dog team to move it. A sled built so that there isn’t enough friction tires a team out, too, as the team works to keep the sled from sliding around like a game of Reverse Crack the Whip with the sled pulling on the team rather than the team pulling the sled.

The runners are a key 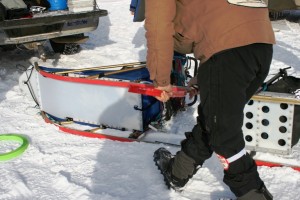 to friction and the sled and the team. Nowadays, there are different types of runner plastic which can be quickly put on or taken off the runners. The different types correspond to different surfaces a musher’s team may be crossing; very slick glare ice, tussocky and bare trails, snowy trails. Sleds used wood or steel on their runners before the different runner plastics came along. While steel held up well, it had a high degree of friction both on non-snow covered trail and on snowy trails in very cold temperatures. Wood runners performed better in very cold weather, but with their tendency to dry out, mushers took care to keep the moisture in the runners. The photos below show runner plastic being changed out. 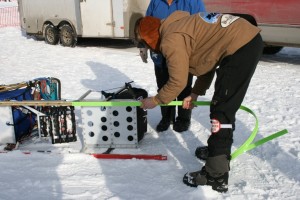 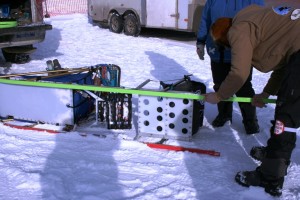 Certainly, mushers wanted to have the right amount of friction so as to keep their dogs from overworking to either move the sled forward, or to keep it on the trail, or keep it following them on the trail. So, they built a degree of rocker in the runners, if the sled was more than 8 feet long. Rocker is a very slight curve in the middle of the runner which reduces friction. This site, http://www.ankn.uaf.edu/publications/VS/dogsleds.html,is a Native Alaskan resource explaining sled building, runners, and the importance of properly using friction to maximize a dog team’s energy. This source lists the scientific principles required to build a sled that works well for a team.

“So, if you look at a dogsled from the side, the runners will have a VERY slight half moon shape. It gives the sled a ‘pivot point’ for steering. If the whole runner were to be totally flat and firmly in contact with the ground, it would be much more friction to steer through. So not actually a part of the sled, more like a design feature.”   Karen Ramstead, musher

In 2014, the beginning of the race trail had almost no to no snow on it. What was the result of that difference in friction? Teams ran faster through the Dalzell Gorge, sleds wrecked and broke, mushers got injured. The bare trail increased the friction for the sled, which would make it more difficult to pull. However, the increased friction of a bare trail enabled the 14 to 16 dogs on the team to get a better grip on the ground and increase the energy and speed. The ride through the Gorge that year looked like this. https://www.youtube.com/watch?v=dAHa-6VkUQY  (Going to this link takes you to a site outside of our website.  We are not responsible for content.) 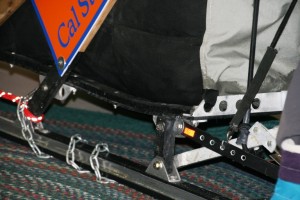 Chain wrapped around the runners of Cindy Abbott’s sled, 2014.

As a scientific topic, students in grades 4 through college study friction in varying degrees of depth. The upcoming information is designed to make you think about friction, how to use the information with your students, and give you some ideas of using the topic at different grade levels.

FRICTION– A force that resists the relative motion or tendency to such motion of two bodies or substances in contact. www.thefreedictionary.com11.1.2015    In other words, friction is the force which keeps an object at rest (static) or the force that works against a moving object (kinetic). Static friction–standing on a tile floor. Kinetic friction–sliding in sock feet on a tile floor until you fall down.

Before working with sleds and friction, have students perform this experiment, in pairs, to see friction at work.

Materials: small paperback book, string, large paperclip bent open so that each end has a hook, metal nuts to hang on the paperclip hook, a desk with a smooth surface, a piece of sandpaper the size of the book, masking tape. Use heavier nuts to reduce the number required.

Tie a loop in the string which is long enough to put in the book between pages, leaving a longer piece of string hanging over the edge of the desk. The book should be placed 6 inches from the desk edge. Tie the paperclip hook to the string so the hook hangs from the string. 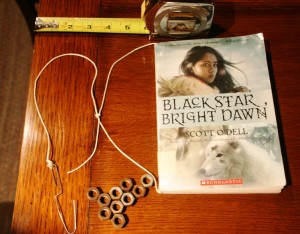 Count the number of washers required to move the book and record the number. 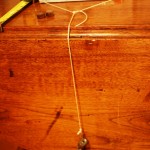 Add washers again, until the point that the book begins to move. Count the number of washers used and record the number.

This experiment gives the students a chance to discuss why the same size book was used, the same kind of washers, the same 2 surfaces, and the same placement of the book from the desk edge (controls or constants: Only one thing in an experiment can change, otherwise one is not sure what the experiment measured.) Students should identify the variable in this experiment (the surface the book lay on).

On another day, students can translate their friction experience to an experiment using themselves and a toboggan.

Friction and a Toboggan

Toboggans used to pull heavy drop bags, the bags mushers pack before the race and that get delivered to the checkpoints, reduce friction for the volunteers arranging the bags in alphabetical order. It’s much easier to pull a toboggan with 3 60 pound bags than dragging one 60 pound bag on the snow. 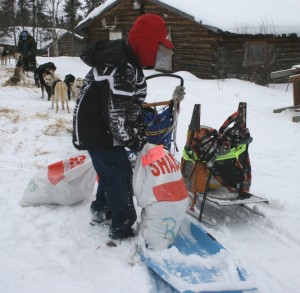 This young helper in Shageluk lifts a drop bag off the blue toboggan.

Determine the Hypothesis: Friction will be greater on some surfaces and lesser on other surfaces.

Procedure: Students work in pairs. NOTE: If there aren’t enough toboggans for all the pairs to do this simultaneously, organize this experiment as a station. Enlist adult volunteers to supervise it or other students who are doing activities at other stations.
Go to the first surface to be used. Load the toboggan with 20 pounds of weight. Students should discuss and identify why 20 pounds of weight is used (to make the energy required of them to cause the toboggan to change from a static friction to a kinetic energy more noticeable to the students).

Each student pulls the toboggan on its surface until it just begins to move. Emphasize the constant of using the same amount of energy; they pull only until it starts to move. (No jerking hard, no digging in their feet to pull, no running, etc.) Students rate their own effort as more or less effort required to move the sled. The partner records what the student reports.

Repeat this on the each surface that has been chosen to test.

Each student represents their own data in a chart labeled More Effort to Move and Less Effort to Move, recording the surface in the appropriate column.

Collate the individuals’ data into one chart. EXAMPLE: Carpet surface required less effort. Write Carpet in the Less Effort to Move and then use tally marks to represent the number of students reporting Carpet as requiring Less Effort to Move.

Students discuss the collated chart and point out observations and any unexpected information the chart reflects.

QUESTIONS to talk about: Remember that the variable is the surface the toboggan is on.

• What quality does a surface have that caused you to use less effort to move the toboggan? (Smoothness, slickness. These qualities mean less friction.)

• Is less friction advantageous or not advantageous? (Race car drivers want to have more friction so they can drive the cars faster or hold the turns in the race track better. A sled dog team wants more friction for the same reasons.)

• Can friction become so great that it is not advantageous? What surfaces during a sled dog race could be advantageous for a team? In 2014, there was little to no snow in the Dalzell Gorge; it was bare dirt and roots. Teams traveled much faster, and out of control, on that surface. Discuss the friction on that trail in terms of the dogs and sled. (Friction on bare dirt was greater for the sled and greater for the dogs. The greater friction for the dogs enabled them to go faster.)

• What could be done to a sled to increase friction to slow the team? (Wrap the runners with chain.) What can be done with a dog team to decrease their effect on the speed? (Disconnect some of the tuglines from the dogs to the gangline in order to reduce the amount of the dog’s energy transferred to the gangline.)

Scientists have to be able to write clearly in order to communicate the results of their work to others. In this summarizing  activity, students practice writing clearly to communicate. Another job area, technical writing, requires clear, concise writing, usually in an industry like computers or engineering. Technical writers work with journal articles, instruction manuals and other documents that clearly communicate information to others. http://www.bls.gov/ooh/Media-and-Communication/Technical-writers.htm  Going to this link takes you to a site outside of our website.  We are not responsible for content

Summarize the experiment in regards to friction. Summaries should contain correct scientific language. Younger students can use a word box to help them write their summaries while older students write summaries without the aid of a word box.

EXTEND IT: Video students moving the toboggans. Create a video montage. Display the individual charts and summaries. Invite a scientist or technical write to speak to your class 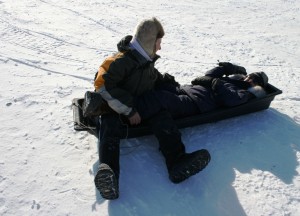 Lack of friction makes for wild toboggan rides for people, too.