Forces of Flight Applied to My Sled

Lift, weight, thrust and drag are the four physical forces that make flight possible. Which of these physical forces can be applied to a dog sled as it glides along the trail? Teacher on the Trail™, Linda Fenton, posed that exact question to her third grade students while learning about and experimenting with the 4 Forces of Flight. 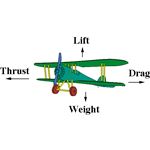 Does the force of lift apply to the sled when mushing? Lift requires the large surface area of wings. Wings would make a sled far too large and cumbersome for the trail. No, lift doesn’t apply to the ordinary sleds used in mushing BUT it does apply to Santa’s sled.

How about weight? Does the force of weight apply? Thumbs up, weight really affects how a sled glides along the trail. The heavier the sled, the more power is required to move it along the trail. Packing the sled bag is also critical. Heavy items are packed on the bottom of the sled bag for better balance when sledding through the challenging technical parts of the trail like the Happy River Steps or the Dalzell Gorge. To keep the sled as light as possible, mushers send drop bags that contain food and other essential items out to the checkpoints along the trail. Some mushers claim they even cut half the handle off their toothbrush to cut weight. 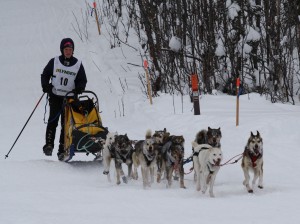 What about the force of thrust? What supplies the propulsion or energy for mushing? There’s more than one source of energy in the sport of mushing. First, and most obvious, dog power provided by strong, powerful and energetic sled dogs. There’s a gang line that’s attached to the sled. There are tug lines that come off the gang line. Each dog wears a harness that the tug line hooks too. That’s how the force supplied by the dogs is transferred to the sled. The musher supplies force also. While standing on the runners, a musher might use a ski pole to pole or one foot to pedal. On a steep climb, mushers run beside the sled and help the dogs by pushing. Mushers have probably thought of harnessing wind power too – popping a little sail out front to catch the wind. It’s a good thought but Iditarod Rule 15 prohibits the use of a sail.

Drag is a DRAG! It’s the force that opposes thrust. Mushers try to make sleds and sled bags that are as sleek and aerodynamic as possible. When they pack a sled, again they try to make it sleek. Often mushers pick up a bale of straw at a checkpoint and then go on through to camp a little further up the trail where it is quiet. Mushers bungee the straw bale to the top of the sled bag. That sure makes for more aerodynamic resistance or drag, but you can bet they position it lengthwise rather than across the bag. There’s also the issue of friction as the runners of the sled glide on the trail. When there’s good snow, there’s less friction but sometimes there are sections of the trail that are short on snow and the runner plastic gets pretty beat up. Mushers send new rolls of plastic out to checkpoints so they can change out damaged runners. Less friction between the runners and snow requires less force to move the sled forward.

Well, there you have it, the 4 forces of flight applied to a dog sled. Because I’m a sled dog, I was born to run and pull a sled. I became really interested in flying when I left my home state of Alaska and flew to my new home in Wisconsin. I was only eight weeks old but knew that I wasn’t traveling in anything like the sled I was used to seeing. It’s pretty exciting to think that the physical forces that carried me to Wisconsin apply to the sled that I pulled on a run this morning.